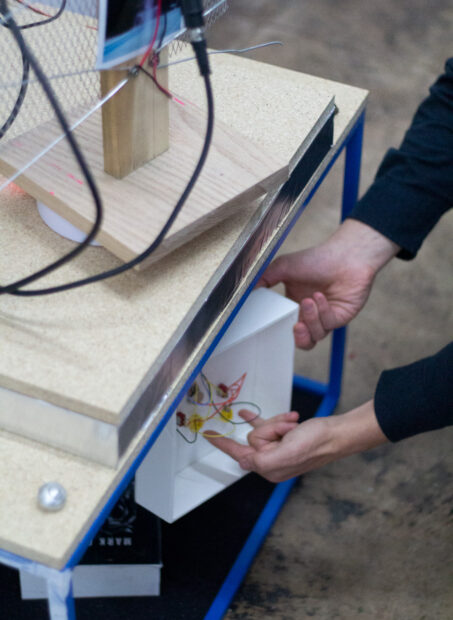 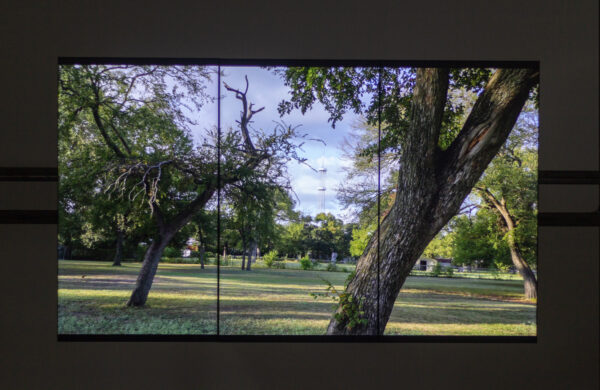 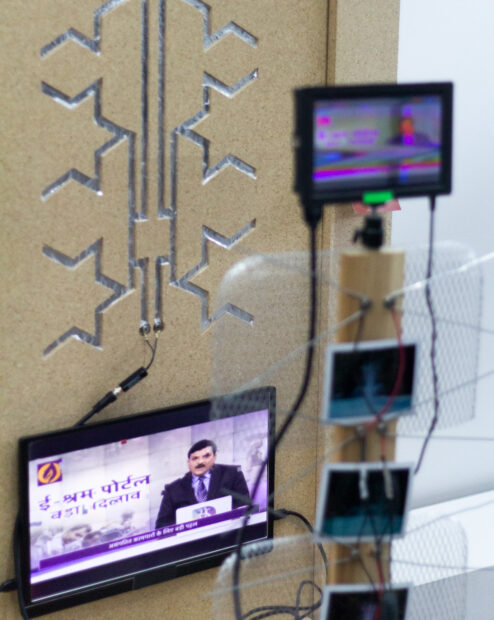 As an accidental rebuttal of the lack of video works at the Dallas Art Fair, ex ovo, a contemplative Dallas gallery, is exhibiting a show of media about media. Trey Burns, a co-facilitator of the Sweet Pass Sculpture Park on Fabrication Street in West Dallas, has been known to expertly install plenty of shows by other artists, like 2019’s Next Exit and this year’s Nearly Natural. While both exhibitions were magnificently curated group shows about Dallas’s relationship to place, Burns’ show makes its own statement about the city where he and his cohorts activate sculpture.

In Fountain (Wheeler Creek), a mixed media sculpture covered in analog photo prints by Burns, two different antennas receive a publicly broadcast video signal. Burns pointed out to reception attendees the custom made elements of his work: a handmade video mixer converts the antennas’ digital signals to analog, and one of the antennas is carved out of wood and laminated in foil using instructions the artist found on Reddit. A replica of Mark Fisher’s K-Punk, which is a posthumously published volume of critical writings on media from 2004-2016, sits on the bottom shelf of the installation. Fisher is known for his thoughts on hauntology and capitalist realism, two theories which are usually applied to media and then transliterated through contemporary political developments. Fisher was often interested in the cultural symbols from the past that outstay their welcome, which is reflected in Burns’ exploration of landscapes of competing ecologies. The perspective Burns offers is typical of Dallas: concrete edifices host birds and land mammals, seemingly lost in their native land. The urban design of the city displaces the past for a misplaced future. 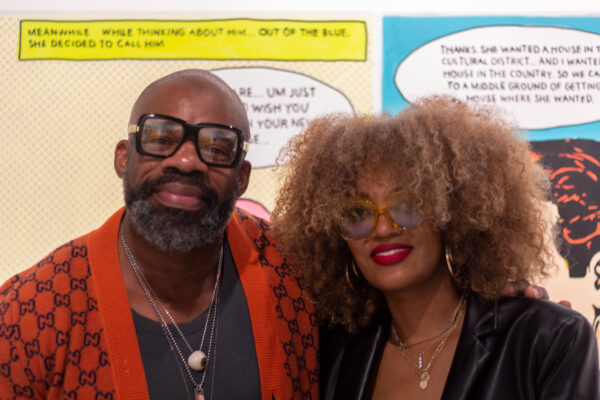 Gerald Bell and Daisha Board 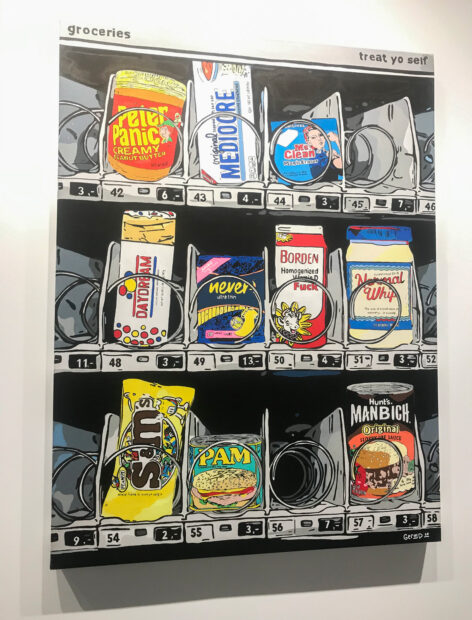 Gerald Bell, ‘Groceries’, on view at Daisha Board Gallery

“I built this space because traditionally, in Dallas, we don’t get representation,” the newly minted Sylvan Avenue gallerist Daisha Board said to a packed house on the opening night of her space. The gallery will exhibit more traditional work, as well as performance and digital media. For now, artist Gerald Bell’s painting exhibition of reimagined cultural symbols fills the space.

YIELD’s main subjects are the Simpsons, pandemic commodities such as toilet paper, and Donald Trump’s failed second Presidential bid. The figures in Bell’s paintings are in dialogue with one another, but their conversations (which are hyper contemporary) are meant to be overheard. The viewing experience is remarkably light in spite of the works’ potential to prescribe a doomed future. This is, in part, because of the show’s inherent humor: Bell’s painting Groceries features a punny jar of Peter Panic peanut butter tucked in with a shelf of actual products. In this piece, he takes on a mirthful approach to presenting consumer options updated to reflect reality (à la Alex Revier). 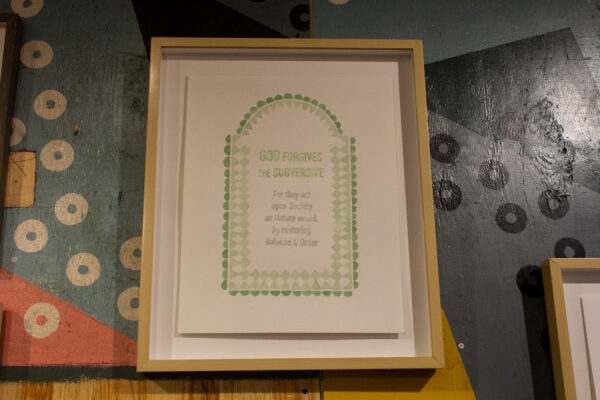 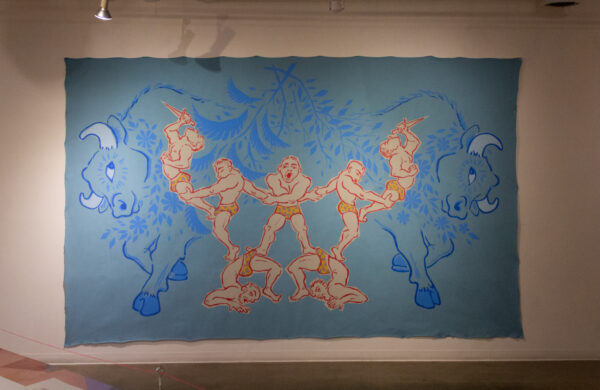 Have I mentioned how busy openings are these days? I rushed to artist Heyd Fontenot to ask him for a statement on his show, in anticipation of the crowd that would inevitably hold court with him during his opening at Dallas’ Conduit Gallery. Succinctly, he said: “Buy low, sell high.”

Fontenot has shown at the Galveston Arts Center and the Fort Worth Community Arts Center this year, both times displaying his wall-sized canvas paintings of decorative pattern motifs and minotaur figures, which he considers to be more tragic than powerful. Though Fontenot has executed nude portraiture of living Texas art figures for many years, he has recently honed in on the dynamic of men that face off — sometimes in intimate embrace, and other times in a coarse rough and tumble. His large-scale wall work that serves as the show’s backdrop is composed in a freestyling, unresolved way, which indicates that Fontenot does not put stock in the rules or regulations of presentation. Still, his pattern work is friendly and fun to see alongside the bodies he imagines.

The show is almost an omnibus of the years Fontenot has spent since leaving Dallas. “I had the show in Galveston in the spring, and the show in Fort Worth in September with Erin Stafford. I knew I had these three big projects coming up and I didn’t want to repeat any pieces. So I planned the three shows to be separate exhibitions, but they do recycle some imagery and ideas. But all the works themselves are unique to the exhibition,” Fontenot explains. Last month, Conduit showed a blockbuster retrospective of Annette Lawrence, which gave Dallas a front-row seat to the storied accomplishments of her career; that impulse has been brought over into this show, at a slightly smaller scale. While there are some components in Color! Pattern! Propaganda! that will read as familiar to many a Texas art lover, overall the show is an exciting presentation that gives viewers context as well as goosebumps. 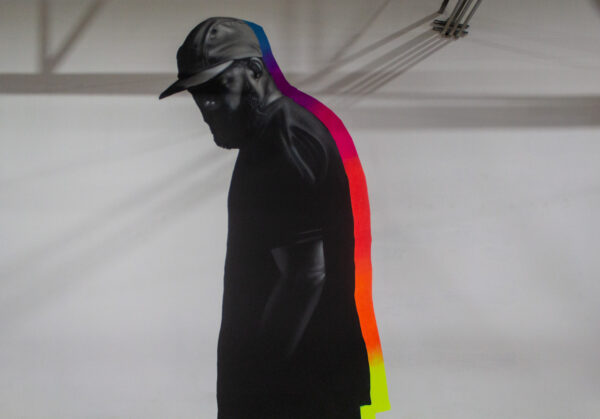 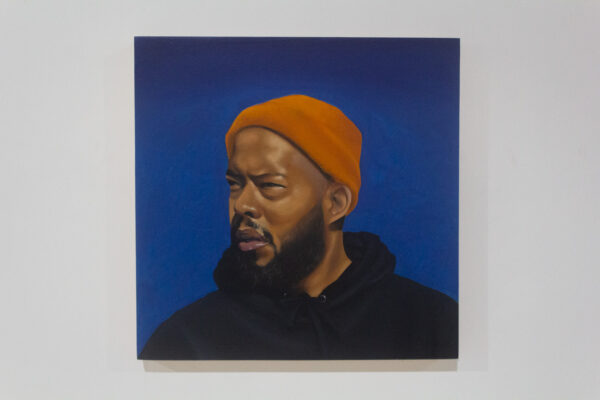 The exhibition that Biggers put on this summer at the South Dallas Cultural Center has grown into this show, UNSPOKEN BURDENS. “It’s still exploring that same concept and playing with how far I can push the execution using the same elements,” says Biggers, speaking to his graphic portrayal of Black men. The works are about vulnerability, and are meant to allow his subjects to simply be themselves. Models like Cameron McCloud (of Dallas music group Cure for Paranoia), Austin artist Adrian Armstrong, as well as others make a return in this body of work.

While the artist’s shadowy portrait style featuring slim neon outlines makes an appearance, Biggers has also put some sunny, full-color portraits in the show. A larger-than-life mural, a common Biggers product, adorns another wall in 500X’s gallery. I asked Biggers what drew him to put his mural work in a gallery setting. He said, “I did it strictly for the impact it would make in conjunction with the work on view.” 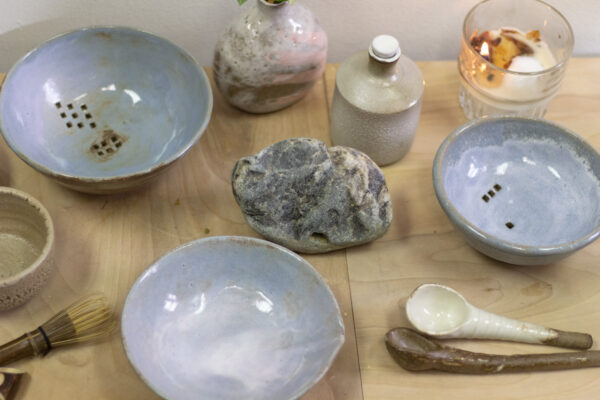 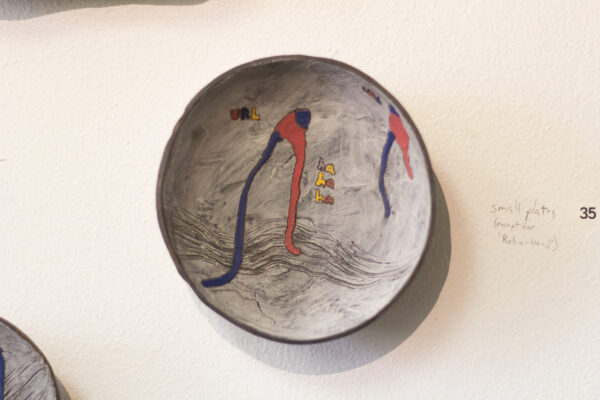 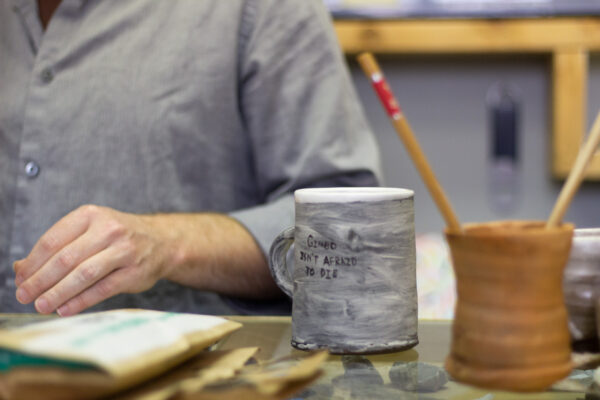 Dallas artists Jeff Gibbons and Summer Aquino emerged from a lengthy pandemic to present their ceramic wares for one day only, alongside baked Klobanesks by Skye McDaniel and Lily Hanson. The storefront offered by Soup Ceramics featured mugs, berry bowls, tea bowls, ewers, yakumi lidded-bowls, pour over filters, flasks, and footed cups with fired on seashells. Aside from drinkware, there were also flat plates for serving, wheel-thrown spoons, and lumps of clay squished by the artist’s fists, which created a negative shape to serve as a resting spot for teaspoons and chopsticks. Gibbons also has on display, for the first time, a selection of mugs and plates which feature “Gimbo,” a character of the artist’s positive manifestation. The pieces on offer were proportioned at a most intimate scale: some were symmetrical and had delicate edges, while others had uneven surfaces and were completely unadorned. An open studio event allows for unknown pleasures and new discoveries, but a tightly curated coffee and pastry at a masterful studio is a distinct delight.