A Travel Guide for Texans: Alexander Revier at Ro2 Art 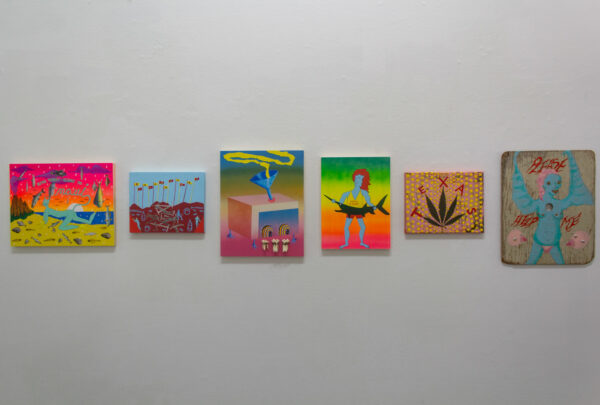 We are on the other side of that dreaded heat wave called summer. Fires are literal these days, with the West Coast bearing the brunt of it. Everywhere, it seems, we fanned ourselves and hoped for the mugginess to subside. Greener pastures seem to be a figment. As deserts become more deserted, and the Gulf breaks records for seasonal rainfall, the patterns of ‘vacation’ become more akin to evacuations. Is the grass greener on the other side if the transfer across geography feels compulsory? If only there were an artist to delineate the points between fantastical “vacation” and a very real need to go somewhere else.

On September 11, 2021, Ro2 Art in Dallas opened CREATURES, THOUGHTS AND TRAVEL, an exhibition of new paintings by Dallas-based artist Alexander Revier. To be clear, these paintings are not exactly about travel, but they have been on a long journey, bound to the warmest season of the year. Revier left his position as Assistant Director at Craighead Green Gallery in Dallas and embarked on a two month trip to Olympia, Washington, where several of his friends live. Working as a gallery administrator had taken up all of the time he yearned to spend creating, and so he made the temporary move, committed to turn his pent-up imagination into a full-blown show. 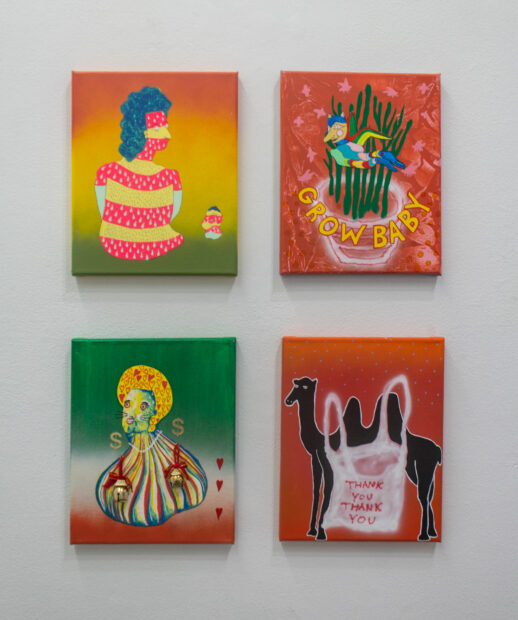 CREATURES, THOUGHTS AND TRAVEL is a procession of psychedelia, just winsome enough to avoid the wincing feeling of a bad trip. Tying it all together is a shaped panel piece titled Brochure Stand, featuring satirical travel pamphlets with titles like “Teen Crime Tour”, “Indoor Outhouse”, and simply “Doors, Doors, Doors”. The feeling is that some of the banalities of the world we’ve built can be resold as attractions. They are features of the world we live in, and they may as well have visitors.

The works surrounding this centerpiece play less with didactic strategy, and make sense as works produced on a free-wheeling road trip from Texas to the Pacific Northwest.

The show opened on the 20th anniversary of the terrorist attack on U.S. soil. In the past, Revier has made works that allude to the event, though he did not choose the date for the recent opening. Revier’s work is mindful of the constant before-and-after phases that encumber our epoch; when the shoe drops and nothing is the same ever again. Brochure Stand approaches this more directly by promoting the mundane and the horrible with the distanced reason that print ephemera often embodies. 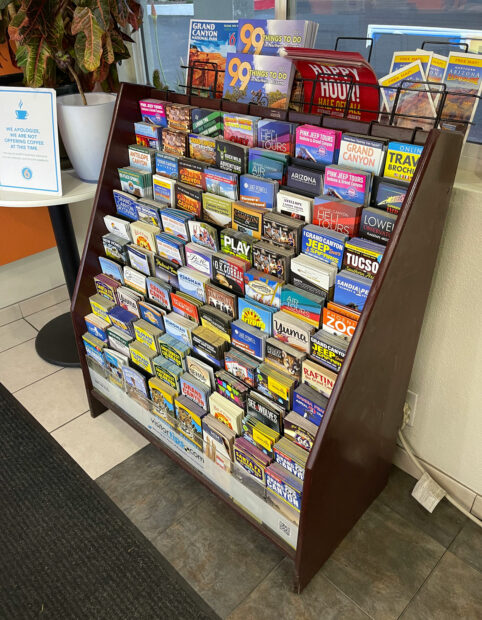 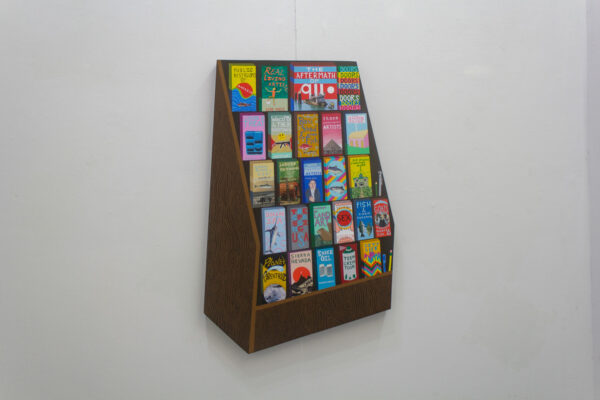 The small paintings, with their aloof characters and vibrant gradients, exist in the ether outside of reality, where time and political associations are void. And of course, there is the necessary play that comes with making work on the go. “I was messing a lot with sprays and spray paint. What would happen if you really saturated the panel and then pulled it up?,” asks Revier of the works that came out of the trip.

The paintings are adorned with minute, three-dimensional elements in various places — a resourcefulness owing to the artist’s ability to turn refuse to treasure. There is a slight sensation of traipsing through the Midway of the fairgrounds, with senseless-yet-sensational attractions blaring in all directions. Revier hopes that this body of work, which generated heaps of new faces and personalities for his oeuvre, can expand into a larger narrative body. His need to fill up the sketchpad has been fulfilled. Now it is time, he feels, to give these works a fuller backstory, and a setting to roam freely, yet with purpose. He hints at a new project, but it isn’t time to discuss it yet. Clearly, his drive across the Western United States has rewarded his return to making. 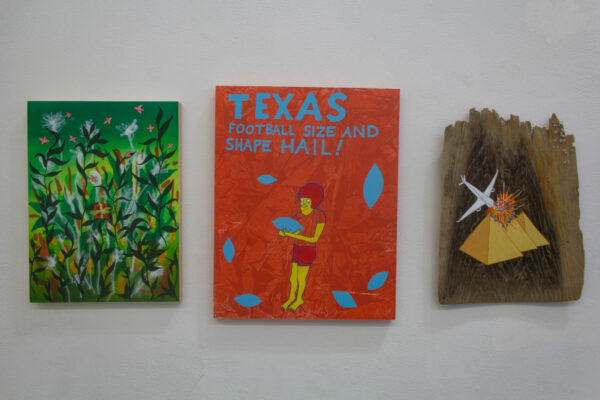 Revier  approached this body of work in a non-linear way, and the pieces tend to land on truths about the future in spite of their humorous approach. “I feel like the Texas football-sized hail piece is particularly prophetic,” Revier says of one painting. He mentions the extreme freeze that pulverized the Texas electrical grid in February. Less than six months later, he was shuttered inside a basement in Olympia, escaping a triple-digit heatwave that wouldn’t go away.

Its relationship to bad weather is not the purpose of the show. Revier does not preach. However, a few of his motifs feel timely — shipping containers, planes, and plastic ‘thank you’ bags — and pull our attention out of the cartoon and back to the moment. There is some intentional reality here, truth from life. One painting, with dried concentric dots of acrylic paint formed around a cannabis leaf and emblazoned with the motto Texas, is an ode to the quick gig he took on a cannabis farm, making up some of the money that his odyssey ate up.

Revier’s show has the capacity to illustrate Texas’ relationship to the rising tides of change, with the nuance that only an artist could muster. His condition is this: take the time to make the work, and treat it as a vacation, even when it isn’t.

Thank you, William, for the insightful words and congratulations again to Alex for a great new body of work.