“If this sells for a million dollars…”

This was one of many sentence fragments I overheard this year at the Fashion Industry Gallery in downtown Dallas, where over 50 gallerists gathered at the Dallas Art Fair. The fair season is a time when Dallas art patrons get to host parties, steward newcomers, and say hello to old friends; it’s our homecoming, and for the past 18 months we’ve waited to see if we would live to experience another one. Well, no longer: postponed from April of 2020, the fair finally returned for a November showing. 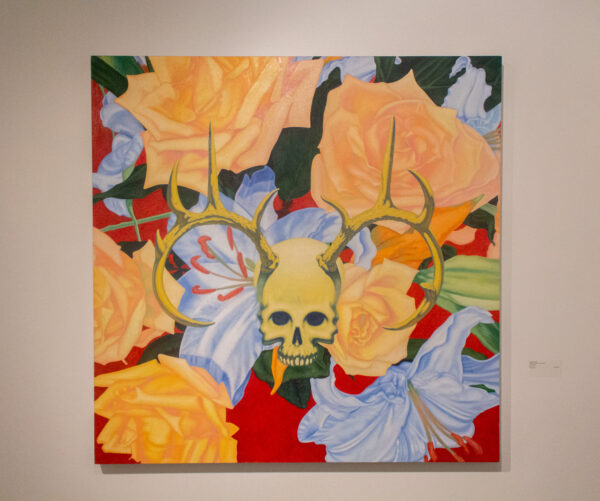 Benito Huerta, In Memory of Days Past (2018), from William Campbell Contemporary

Frankly, I’m struggling to form a clear, distinct “take” on the 2021 fair. For one, this year’s event took place in November, on the underside of the calendar year, as opposed to its usual placement mid-April. Dealers will head to Miami next, at the end of this month, which means everyone’s stop in Dallas marked an early start to the blitzkrieg of the winter fair season. Some gallerists didn’t let their cumbersome schedules show in their booths, while others admitted they’re doing a bit of juggling. Permeating throughout the fair was a compulsive refrain: “How are you right now?”

It’s a question that can be asked hundreds of times as you move within the fair, because there are myriad worlds happening throughout the building. Dallas retailer Sputnik Modern’s booth added a living room vibe to the usually clerical tone of the exhibitor booths running on either side of the FIG building’s narrow hallways. Heritage Auctions also returned this year to table across from one of the bars on the fair’s first floor, signaling the secondary market’s thumbs-up attitude about the whole ordeal.

One of Dallas’ newer galleries, P.A.O. Projects, appeared with snappy paintings from their roster of Japanese and Hong Kongese artists. Other gallerists from Turin and Milan conducted correspondence in Italian over the phone. Los Angeles dealers waxed poetic about how friendly Texas is, and New York dealers took (lots of) meetings off-site. Ushers and collectors brought their flashiest garb, especially to the fair’s opening on Thursday night; the event is a gala for competitively fashionable footwear. Handlers and service workers bussed crates and champagne at break-neck speeds the whole weekend. More or less, the gang was all here. 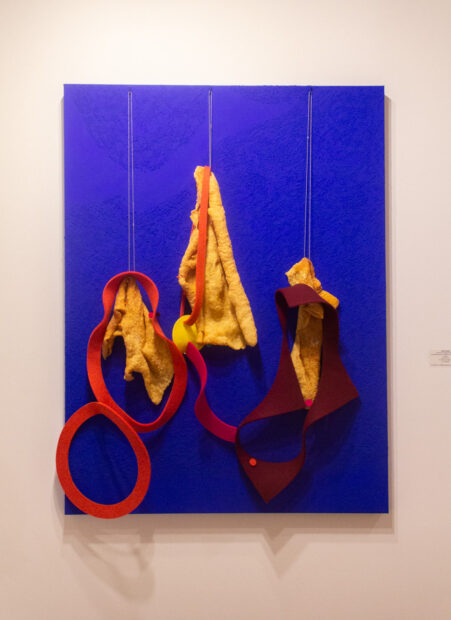 Jesse Amado, I Am Not Your Mexican #5, from Ruiz Healy Art

The fair is a full-service event. However, as with events of all kinds in the Dallas area, the service was somewhat limited. A wing of the first floor was blocked from entry, possibly due to the lower-than-usual exhibitor count. This year’s fair numbered 58 exhibitors, compared to the 90+ in 2019. The reception on Thursday was a typically glamorous affair, and crowds predictably thinned out in the mid-afternoon only to pick back up as night fell. Still, there were sleepy moments during the four-day run, to be sure.

There were also moments of excitement: every year, since 2016, the weekend has kicked off with a joint presser by the fair and the Dallas Museum of Art announcing which works the museum purchased from attending galleries. Johnny Floyd, a fresh talent by way of Detroit, who is currently showing in the project space of Conduit Gallery (and who has only been painting for three years), made this year’s cut, proving that the DMA is willing to take a chance on the newest of the new. Karma, a prized New York outfit, also maintained their steady relationship with the fair with a DMA acquisition.

“Did you RSVP for the Karma party?,” Arthur Peña asked me on opening night. In the 8 hours I spent taking notes on Thursday, I had neglected to get myself on the list. The parties and happenstance encounters on the streets of the city during the fair weekend are something I always look forward to, but this year I couldn’t find the time to make much of that happen. And still, both inside and outside of the fair, I ran into artists and arts lovers who came into town specifically for the event. Although DFW is typically a place of growing pains, I didn’t feel this to be the case this time around. 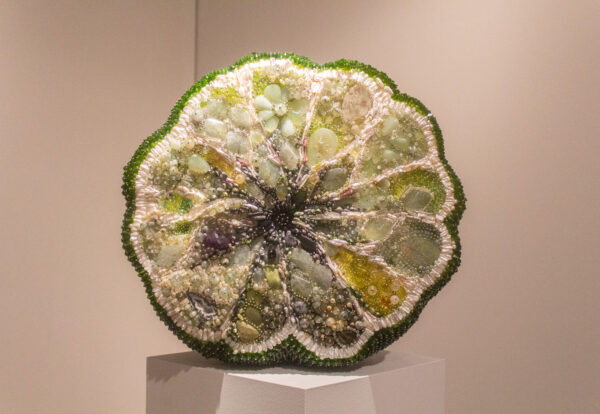 In Bianca Heuser’s review of the recent Athens Biennial, she asserts that there was not enough space dedicated to individual works in the exhibition, especially pieces by up and comers. The scope of the exhibition was undercut, she says, by the haphazard placement of too much work in a dilapidated environment. An art fair tends to be the opposite of this experience. Lowell Ryan Projects of Los Angeles brought sculpture-like paintings by Justin Adian — just a few — and hung them quietly, letting them speak for themselves (or, perhaps, the gallery was still feeling the ripples of the DMA’s 2017 acquisition of one of Adian’s pieces from Skarstedt); Dallas’ Liliana Bloch Gallery lent their entire booth to Simon Vega for an installation of reclaimed materials, which was a lovely break from the typical fair presentation. Houston’s Inman Gallery, among other works, presented drawings on hotel stationery by Robyn O’Neil — short and sweet, but as meticulous as always. Even in this iteration of the fair, which included fewer galleries than in recent years, the event felt full, lively, and (as art fairs often are) just the slightest bit overwhelming. 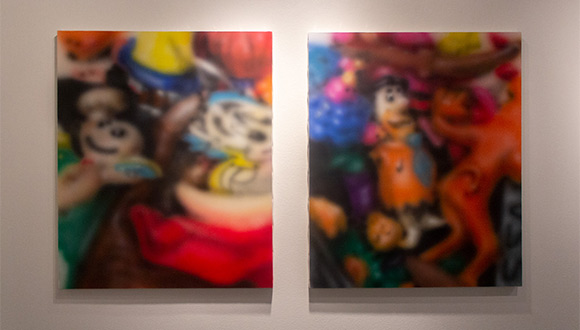 A work by Narita Hikaru at P.A.O. Projects 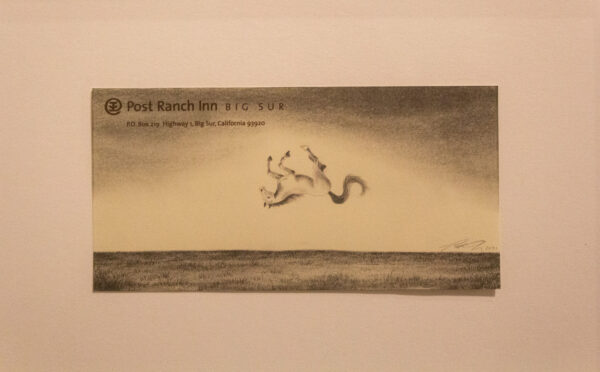 A drawing by Robyn O’Neil at Inman Gallery 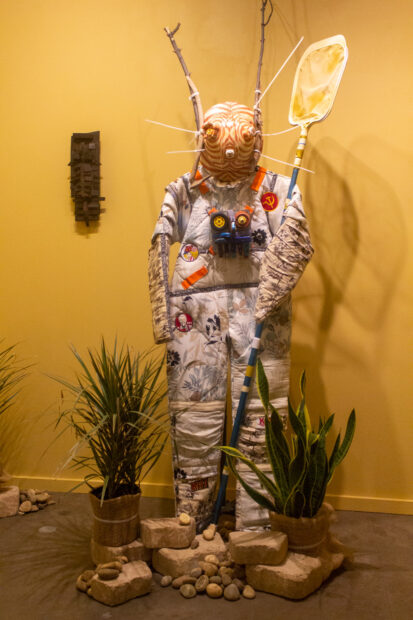 Conversations follow a similar path in a trade show environment (which an art fair unarguably is). A fair cameo was made by Heyd Fontenot (who is Sala Diaz’s interim director), who was in town preparing to install a show at Conduit; Dallas artists Lorraine Tady and Liz Trosper beckoned me to investigate Mark Cuban’s Lazy.com, a new NFT platform; Texas Woman’s University educator Julie Libersat asked me if I actually liked the paintings I was espousing; artist Doug Land offered his evaluation of the weekend: “It’s a lot of florals”; and performance artist Colton White told me where to buy a killer bodysuit.

These exchanges are when I feel the most at home, and I wouldn’t trade them for anything. Art is not just the backdrop — it’s the reason we were all together to begin with. We were overdue for something to rally around, something like the fair, and there’s a silver lining of togetherness and camaraderie to it all. The subject came up over and over again that, like it or not, the fair will be be returning in April of 2022, an overcorrection for a nearly two-year setback. In that case, we’ll all be trading tips and tricks soon enough.

When will Art Fair come to Houston?