Landmarks and What They Communicate: ‘Next Exit’ at ex ovo 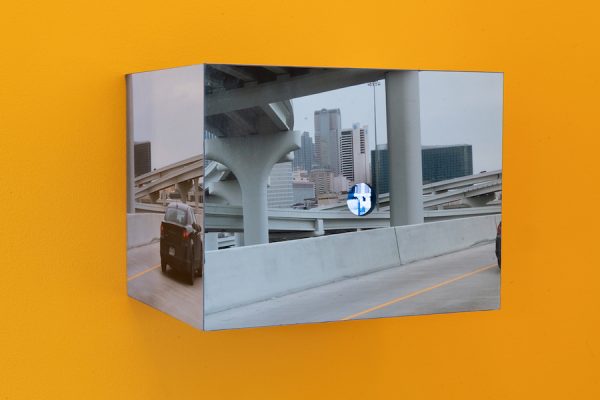 Right now, when you enter ex ovo in Dallas, a small box mounted on the wall invites you to peek in. Look inside and you’ll find a looped video of a running waterfall on a billboard. It’s a strange sight if you’re not from North Texas. But anyone from Dallas knows that billboard, and they probably have a story to tell you about it.

Next Exit is an exhibition about Dallas: the city’s idiosyncrasies, the experience of living and driving here, its landmarks and what they communicate. The result of months of in-depth conversations about the city between the artists and ex ovo director Allison Klion, the show engages with history, the present reality, and visions for the future. 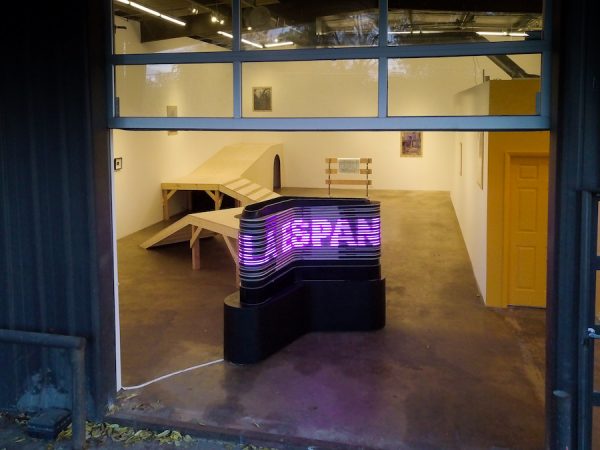 Installation view of ‘Next Exit’ at ex ovo

Jonathan Molina-Garcia reimagines an iconic Dallas building, recognized for an LED exterior that functions as the biggest advertisement on the skyline. The Omni Hack (Prototype I) is a scale replica of the Omni Dallas Hotel with functional LED lighting. But this structure doesn’t flash the Mary Kay logo. “BLACK LIVES MATTER,” “JORDAN EDWARDS,” “BOTHAM JEAN,” and “HABLA ESPAÑOL” appear instead. The work is fantastic, and it originated in fantasies Molina-Garcia had of hacking the programmable exterior lighting of the Omni Hotel, which has been messaging slogans and logos since it opened in 2011. In a way, it speaks for the city, but it also provides an invitation to fantasize of an alternative Dallas that recognizes victims of police shootings instead of corporate interests, and allows its residents to speak for themselves.

Two sculptures by Trey Burns point to the aspirations of Dallas’ builders to forge a great city through perpetual construction and demolition (without much preservation). La Reunion Sign is a marker for the failed mid-19th century European socialist colony. A laser etching on handmade paper shows the cemetery for the early Dallasites, and the fragility of the material emphasizes the decay of the actual historical site. Another sculpture is a construction barrier with a crayon rubbing based on his landlord’s model for West Dallas, where ex ovo and Sweet Pass Sculpture Park (the latter founded and run by Burns and Tamara Johnson) are located. Both sculptures are découpaged with photographs of quirky sightings around the city, taken mostly on iPhones by Burns and Klion. 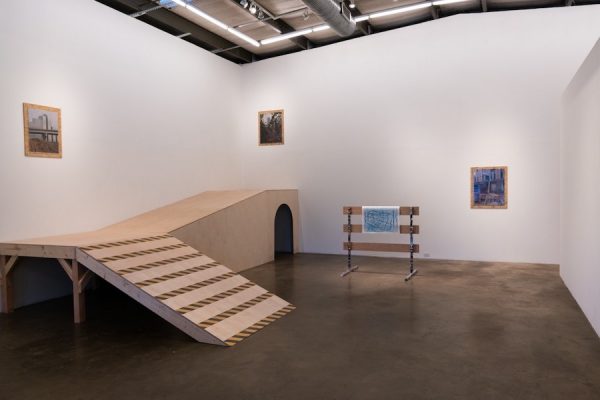 Speaking of construction: this exhibition has ramps! They were built in the gallery space as nods to the highways that unite, or divide, the Metroplex. Videos by Burns stream in a tunnel under one ramp. During the first month of the show’s run, Burns showed a slow, poetically narrated sci-fi film. He’s switched it out for a video of a candid home tour through the Park Cities neighborhoods (which is more entertaining). 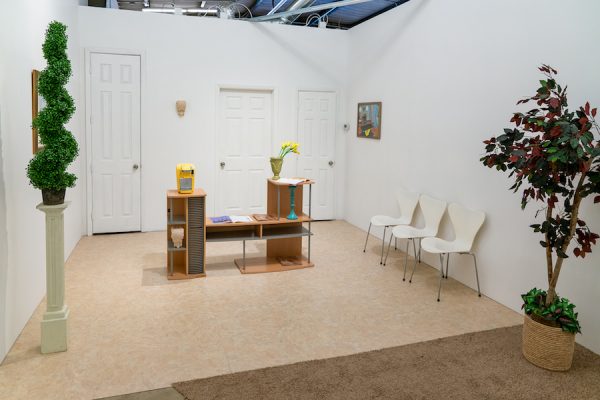 Around the corner from the main space, an installation by Harris Chowdhary creates a familiar space. Commercial furniture, plastic plants, and a Keurig make a showroom for Simple Pool, Chowdhary’s line of gaudy products that are barely parody. A catalog illustrated with renderings features furnishings for the McMansions of the North Texas suburbs, ranging from an armchair “meant for your life” to the “perfect starter column for any home, office, or backyard.” Printed and framed renderings of entire rooms allow viewers to imagine their assembled dream home, and the installation is complemented by another video box by Burns, whose content I won’t spoil here. 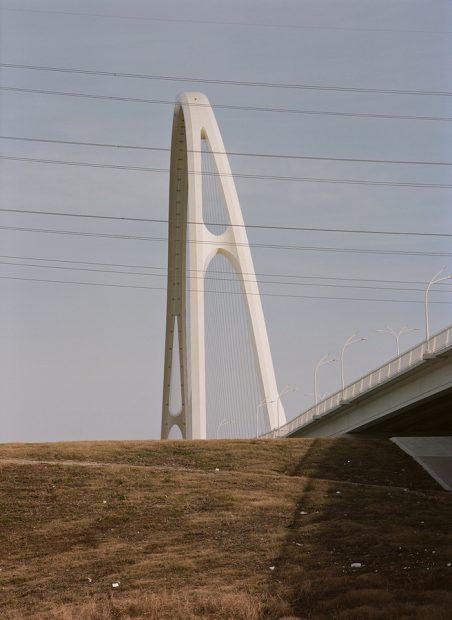 A beautiful group of photographs by Finn Jubak captures interesting juxtapositions in the cityscape, but you wouldn’t recognize these views from any highway. Jubak takes these photos during walks around this pedestrian-hostile city, and in the photos, architecture and the surrounding environments share space and reveal uncomfortable relationships. One arch of the $115 million, unwalkable Margaret McDermott Bridge bends between lightly littered grass and the blue Texas sky. A stream of bricks that used to be the Ambassador Hotel, destroyed in a fire earlier this year, cascades while Bank of America Plaza lurks in the distance.

Those same bricks reappear stacked in two small Polaroids by Jubak. He’s titled them Landmark Study, 5 and 8. They’re an intimate lamentation of the neglected and now lost 115-year-old building. And they are a poignant prediction of a commemorative landmark for the Ambassador that the city could offer in the future, since nobody bothered to preserve the hotel while it stood.

Not that the artists are advocating for erecting more monuments. They’ve deconstructing existing structures with a perceptive, humorous, and appropriately critical touch. Next Exit is an intelligent show that will likely linger in your mind when you drive away down Fabrication Street, pass the hideous new developments on the way to both I-35E and I-30, and face the skyline.

The Margaret Hill Hunt Bridge is highly walk-able with a park walk complete with summer time fountains installed in the walkway for cooling. Was the Margaret Hill Hunt reference actually trying to refer to the I-30 bridge, which has two walk way bridges that both remain closed due to errors that will require millions more to fix before the public will be allowed to walk them?

The article notes the Margaret McDermott Bridge which is the “I-30 bridge” you mention.

Great review for a great exhibition.