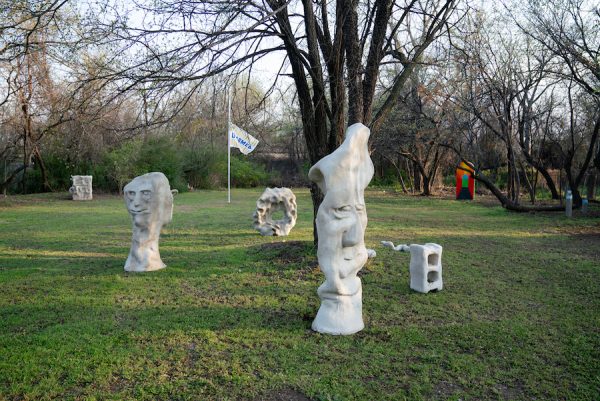 In October, artists and curators Tamara Johnson and Trey Burns celebrated the one-year anniversary of their brainchild Sweet Pass Sculpture Park, in Dallas. (Read my review of its current exhibition, Bush League, here.)

I first met Johnson and Burns at the Modern Art Museum of Worth Modern this past May, during its Disappearing— California exhibition. We spoke about the intersections of sculpture and performance, as well as their challenge of operating a public art space while they teach and maintain their artistic practices. Our conversation occurred at the end of the summer as the duo was gearing up for the fall season. 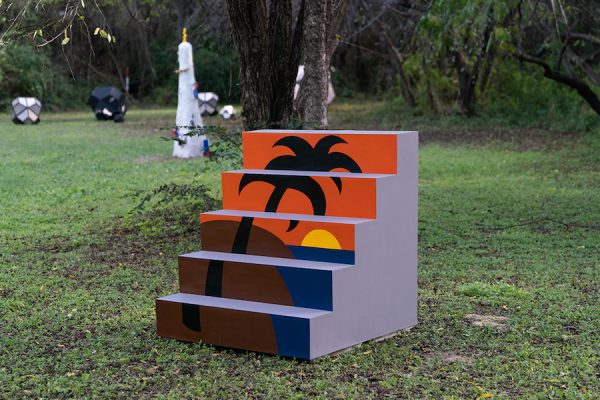 Work by Saki Sato at Sweet Pass, in the group exhibition Getgo.

CC: What have been the biggest challenges over the past year in terms of curating, installation, education and maintaining a public sculpture park?

TJ & TB: Time management. Compartmentalization. Setting realistic expectations as an “artist run” space. As artists, we are constantly brainstorming new ideas and planning the future of the park’s programming, and one of the biggest challenges is the fact that it’s just the two of us at this point. At Sweet Pass we are everything: the groundskeepers, administrators, webmasters, graphic designers, docents, mosquito killers, and the public relations team. There are a lot of plates to spin while we both maintain teaching jobs, marriage, and our own artistic practices. We love this work and are trying to figure out how to manifest more hours in the day. 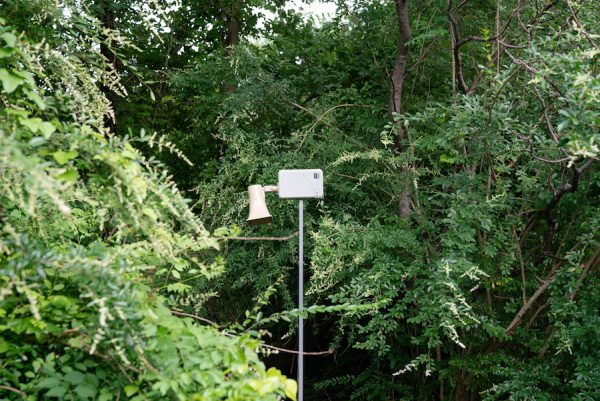 Work by R. Eric McMaster at Sweet Pass in the group exhibition Looms.

CC: In an interview last year, you spoke about the vision to expand ideas and possibilities surrounding public and outdoor art. When I think about public outdoor works, they are usually permanent fixtures within an urban space. Even beautiful green spaces like Storm King in New York or DeCordova Sculpture Park in Massachusetts primarily show permanent works. What is your vision as it relates to the impermanent object within a green urban space? How does the transitory/rotating exhibition shift viewers’ relationship to the space?

TJ & TB: Regarding the impermanent object — this is a concept we are constantly thinking and shaping with each exhibition. Sweet Pass functions differently than traditional public art spaces which are often large-scale, permanent and funded by allocated government construction budgets. Our goal is to give value to the idea of impermanence, temporality and non-monumentality. “Public Art” and “Works outdoors” in our minds are very different. Patti Phillips (a mentor of Tamara’s) stated it best: “…temporary work functions in a field of speculation that may identify how the unpredictable branches of reality might grow.” 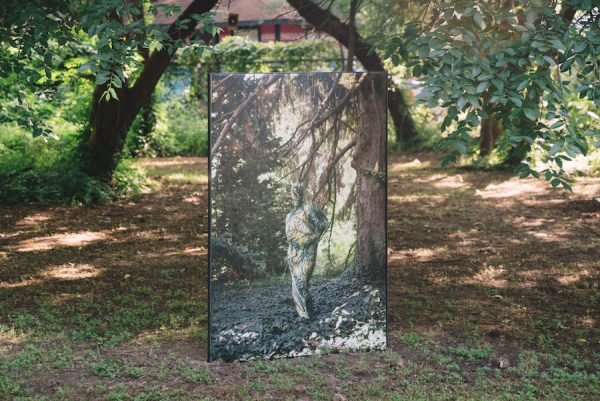 Work by Joiri Minaya at Sweet Pass, in the exhibition Looms.

While permanent works definitely serve a purpose in cities (and other parks), we believe works that embrace a more ephemeral and temporary nature can speak more directly to the physical landscape of place, give artists freedom outside gallery walls, and provide a unique experience to viewers. It also allows a greater number of voices to consider and experiment with these concerns. Over this last year, we have been struck by how much the site changes from show to show and season by season, providing a different sensory experience to visitors.

CC: When I was teaching at the University of Pennsylvania, one of the class texts was the Contingent Object by Martha Buskirk. I’m interested in contingency as a conceptual strategy. How does contingency factor into your curatorial and operational vision with the unpredictability of Texas weather?  Have any of your artists examined this idea in their work? 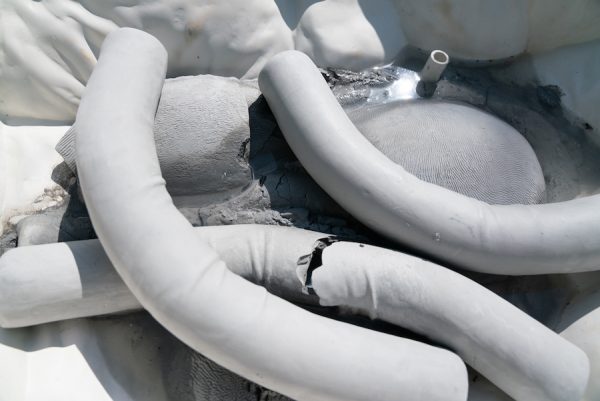 TJ & TB: We named one of our shows Outdoor Cat with this sort of thing in mind. Each exhibition runs approximately three months in the humid subtropics of Dallas, so this must factor into the work. A sculpture outside wears traces of the weather, and becomes an archive of the elements. While these artworks must be hardy, the relationship is more like an annual versus a perennial. Michael Muelhaupt’s work in the LOOMS exhibition was particularly considerate of this condition. Part of his work incorporated cast unfired clay objects nestled in a plaster papasan chair — the pieces slowly broke down over the course of the show until they returned to clay slurry. 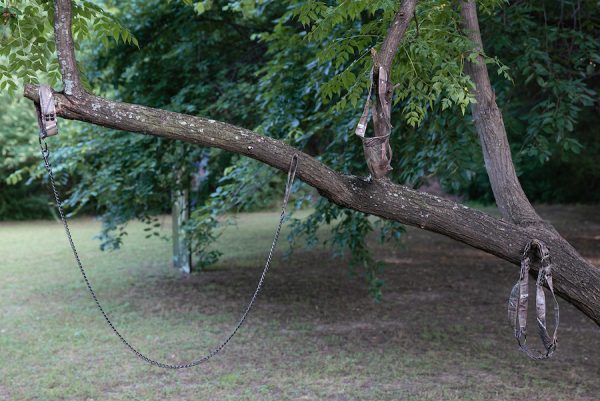 CC: You mentioned after completing a work at Socrates Sculpture Park in New York that your affinity for performance and sculpture aligned. What are your ideas about a performative sculptural practice?

TJ & TB: After completing A Public Pool at Socrates in 2013, the largest takeaway was how the object was activated by the addition of relaxing visitors (i.e. lounging in the pool). We try to create elements in each exhibition where the audience will encounter and interact with the show — where presence completes the function of the work. For our second exhibition, Away Message, we turned the park into a 24-hour drive-in audio piece. While the park was closed for the winter, visitors were welcomed to drive to the gate of the park and tune into a low-powered FM broadcast on their radio. There they could listen to 46 different sound pieces made by different artists responding to the notion of being away. It turned your car into a weird sculpture sound pod. We are also interested in how we can use sculpture outdoors as a lens or vehicle to view other types of work such as sound and performance. We are very excited about our exhibition, BUSH LEAGUE, with the San Antonio collective BUXTOOF, because the sandlot field we have created will serve as an ad hoc stage for a variety of performances, printed matter, and sculptural interventions. It is an ambitious program over several months that will involve a lot of different performers from all over Texas. 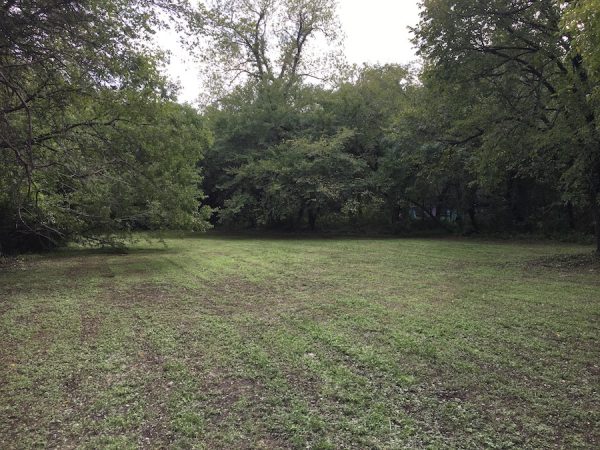 Sweet Pass as a blank slate.

CC: And what is the backstory on the Sweet Pass site in Dallas?

TJ & TB: Our neighbor, David, tells us that there used to be a house of a family he knew growing up. David’s brother also shared with us that somewhere in the park there is a storm cellar buried — we definitely intend to find this at some point! 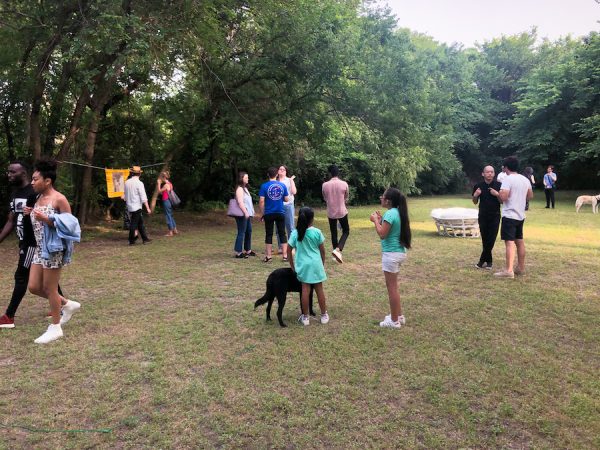 We are also pretty sure the lot was used as a dump for the truck mechanic shop that is where the Ex Ovo gallery is now. The ground is really strange at the park; we find car parts and old objects everywhere. We clean up and then stuff just keeps welling up from underground. We’ll be setting up for an open hours and find a brake drum in the middle of the park. Where did this come from? A few months back we found an old Blockbuster membership card. Our dog Benny found a possum skull. If anyone needs tires, let us know. 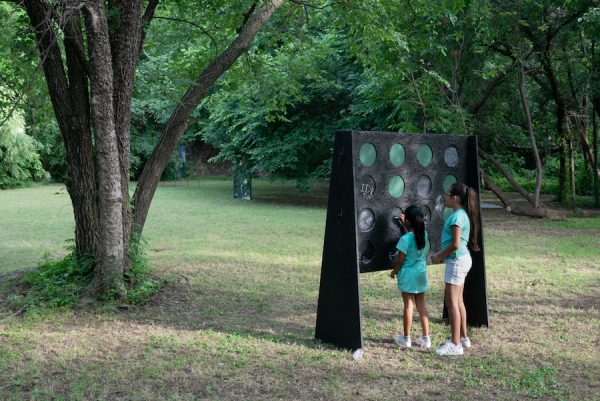 CC: Tell us about the current show.

TJ & TB: Opening in conjunction with the Art Walk West on October 19th, our fifth exhibition, BUSH LEAGUE, uses the 150th anniversary of major league baseball as a point of entry. We are working with a Texas collective BUXTOOF, to organize a variety of events and programming within the park that will be up until mid-December with work by Brock Caron, Daedelus Hoffman, Lindsay Starr, Anthony Rundblade, and Ryder Richards.  We will be working with local artists and special guests such as the Texas Playboys Baseball Club, Brad Tucker, Hills Snyder, Garrett T. Capps, the Wheeler Brothers, the Daniel Georgiou Group and VidKidz. We will also be debuting a micro-cinema series in November near SP2, our new media space, located at the back of the park.

Landmarks and What They Communicate: ‘Next Exit’ at...