They Didn’t Know What Could Be: September 2021 Shows in Dallas-Fort Worth 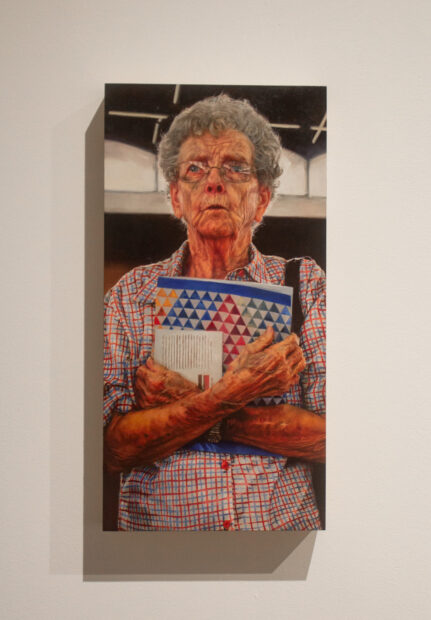 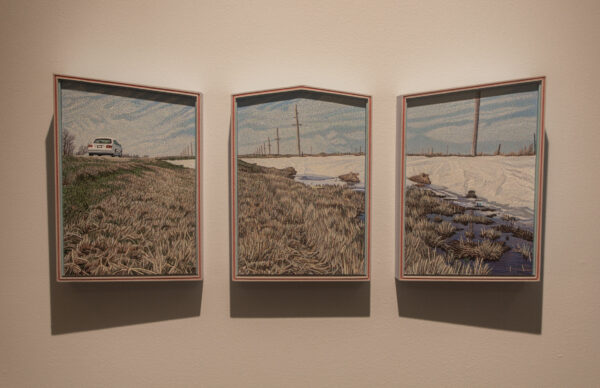 Lloyd Brown’s paintings of the desolate, off-the-beaten path moments along U.S. Highway 50 are panoramas that deserve their own attention, but the mat board frames that hold them are especially beguiling to me. Mat board traditionally hugs the surface of a work, squinting it down into focus for the viewer, but here the boards are stacked and laminated. Brown has painted the interior walls of these special frames, so they create an ambient series of hues that imitate the blooming color of nature. Brown has a personal connection to the lonely highway; it was the route that separated his parents after they divorced. The stops he makes when traveling between the coasts intimate that we ignore the majority of what exists in our nation, and perhaps, our own lives.

Amy Werntz’s paintings of elderly strangers about town (and beyond the borders of Dallas) are an ode to life. Werntz has done what many painters do, obscuring the elements of her photographic reference so that the subject can shine. These humanist portrayals differ from Brown’s approach, which is to show the entirety of a scene with nothing omitted, but Werntz is somehow truer to life through feeling. The skin and hair of these figures are truly mesmerizing, reflecting light in a way that may not be perfectly true to life, but feels like a tribute to it of the highest respect.

The final gallery in this show is a tease into the 21st century, following a delectable display of historic Spanish fashion objects paired with pictoral narratives that help explain the rich layers of Spanish society through the centuries. One dress, designed by Manuel Piña and then painted by Alex Serna, evokes the influence of Miró, which in turn, is an abstraction of the Spanish feminine flourishes seen in the previous galleries. “Fashion is still with us, shapes are still imposed, comfort is still compromised,” says Dodson, pointing to all the pinching and cinching that these styles dictate on those who wear them. The show is unlike the surge in art exhibitions that focus solely on stylish clothing; here we’re given robust context to understand how style is more than patterns and gowns. 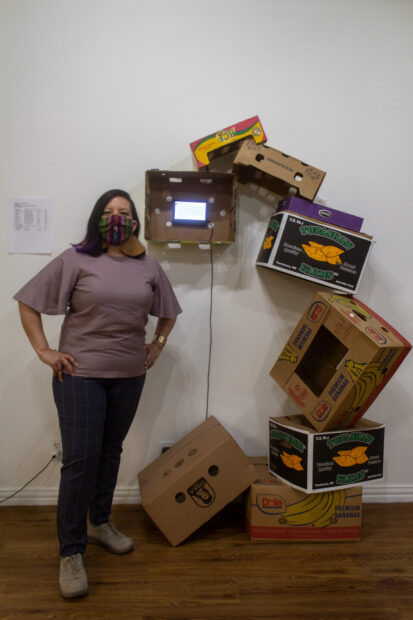 Tina B. Medina Poses in front of her video installation, on view at the Norman Brown Gallery at the Goldmark Cultural Center 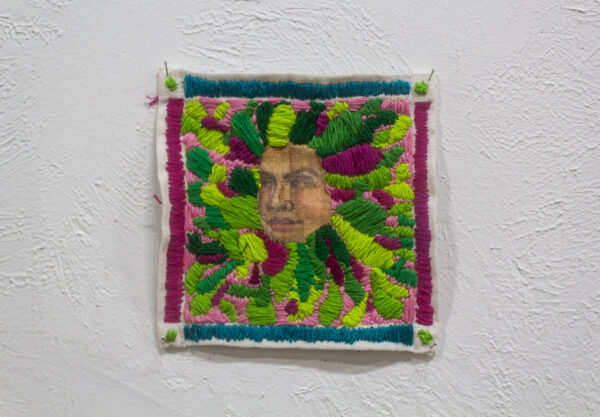 Tina B. Medina, on view at the Norman Brown Gallery at the Goldmark Cultural Center 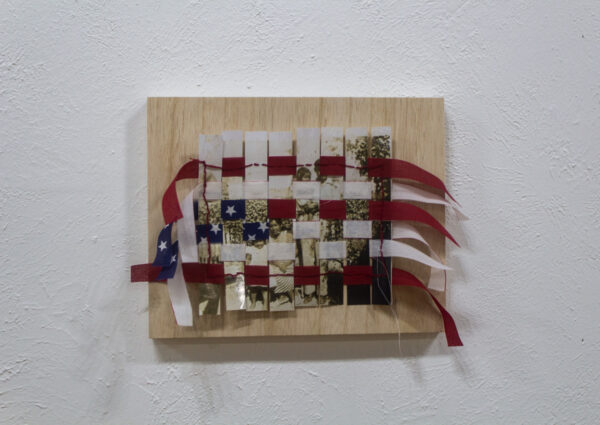 Tina B. Medina, on view at the Norman Brown Gallery at the Goldmark Cultural Center

Tina B. Medina: They Didn’t Know We Were Seeds, at the Goldmark Cultural Center N. Brown Gallery, Dallas, August 13–September 10, 2021

“I started painting women’s faces many years ago but of course I’m interested in faces that look like my face because that’s not something you see in the media. I started to paint on these little pieces of fabric and I painted the first one, a zapatista. They’re about indigenous rights in Mexico.”

The works here are about workers. Medina has pulled produce cartons from their shelves and huddled them around a video installation which highlights workers’ toil, so that it might not be in vain. She is a descendent of farm workers herself, and recognizes that the work of our elders can be washed generationally, until it is no longer fresh in our memories. Medina has exercised Mexican-American identity in many ways inside this small show at the Norman Brown gallery at the Goldmark Cultural Center, part of a program curated by Eliana Miranda. This is the first full year of programming at the gallery, after it opened in January of 2020.

“I chose Tina because I’ve known her for a few years now and I’ve always admired her work and respected her as an educator. When I was trying to schedule people for this year, she was definitely one of the top choices,” says Miranda.

I asked Medina about how she touches on the subject matter from so many different material approaches:

“I think that I’ve always worked with people of color in mind, and my ancestry. I’m very much about social justice, I say ‘that’s not fair!’ My work has a political slant to it regardless.” 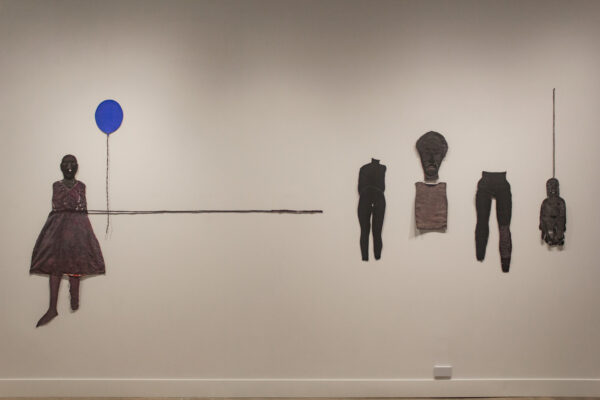 Gallerist Liliana Bloch says this show of stitched and painted leather and paper pieces was hard to curate because each piece tells a story that wants to stand on its own. “It’s almost like an X-ray of physical and psychological wounds.”

Says the artist, in conversation with Daina Augaitis in the catalogue for her exhibition Witnessing at Toronto’s Power Plant Contemporary Art Gallery in 2019: “In my work, that which is often on the periphery is large and in your face. For some that’s a scary thing, and they don’t know how to deal with it.”

This is an accurate summary of viewing the show. There is a sureness in the faces that adorn the wall, but their mouths and eyes are not all treated equally — some facial features are missing. The configuration of these figures is formed, in part, by Henry’s experience working with the Peace Corps in West Africa in the mid-’90s. Aside from her commitment to service and volunteering, the difference in community sensibility between the United States and Africa made an impact on her. “In this small African village, there was absolutely no anonymity whatsoever. Everyone knew I was the foreign schoolteacher, and if at times I wanted to be anonymous, I couldn’t be,” Henry says. Henry’s fabric patches, the faces and segmented bodies, are pieces of people we may not know, but they are people, nonetheless. 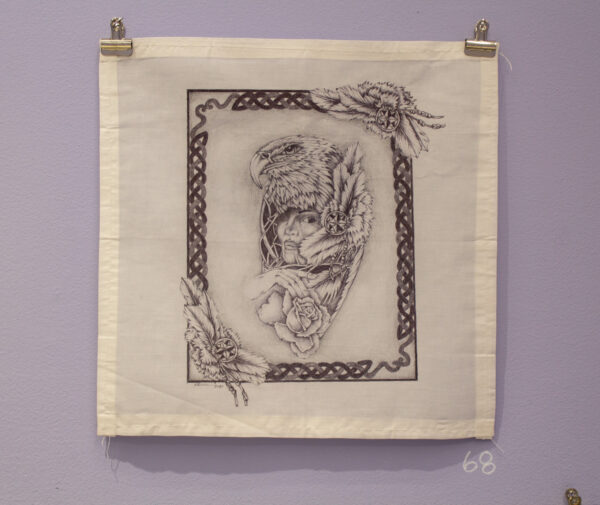 Leonard B. Dennis, ‘Indian’, on view at SMU’s Pollock Gallery 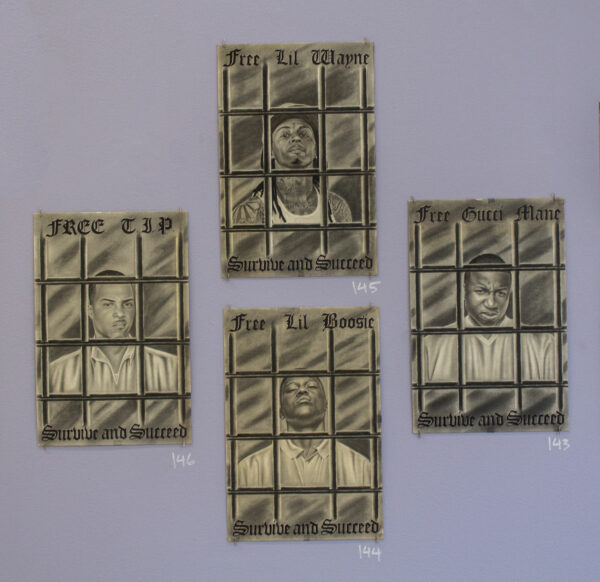 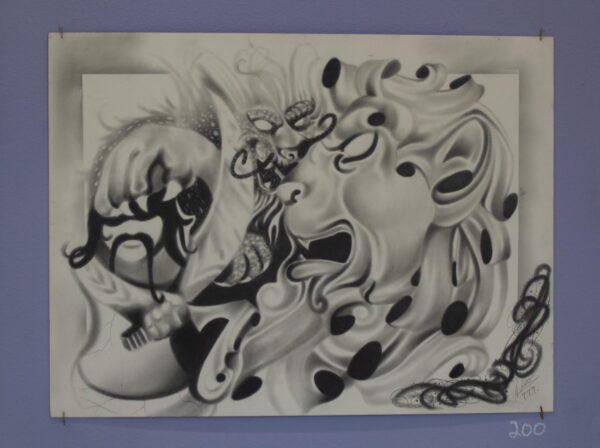 Folk art meets social practice in this riveting exhibition, mostly drawings on paper, made by currently and formerly incarcerated individuals. It is striking how closely it resembles any well-curated group show, though the work is made by individuals who don’t have studio access or years of formal training. The exhibition is an annual affair (with the exception of last year, due to the pandemic) organized by Richard Miles, the CEO of Miles of Freedom, a non-profit that assists Texans in the state prison system navigate the obstacles that conviction places upon them. Every year, the organization collects artwork, with assistance from Darkwood Gallery in San Angelo, to sell works by individuals behind bars, and gives 88% of those sales directly to the artists. Because of the limited materials available to them, graphite on paper or board is most prominent in the show, and every level of skill is on view. Some exciting talent is evident in some of the work — work done in earnest and with the utmost sincerity. 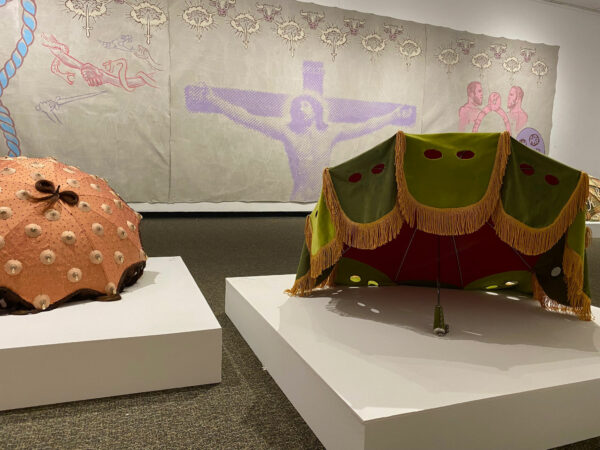 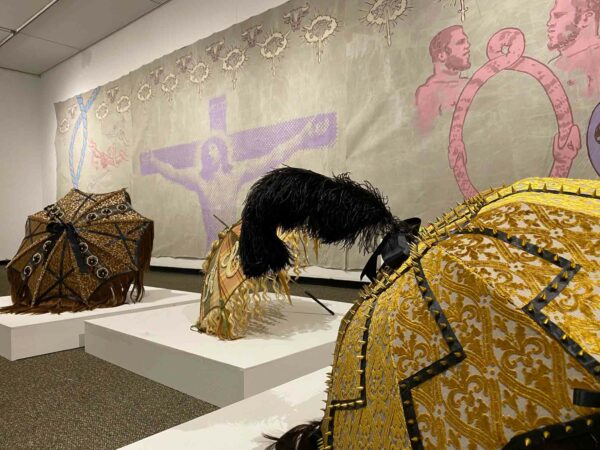 “Erin and I have this gift of being able to dialogue together,” says exhibiting artist Heyd Fontenot. “We hadn’t really planned so much, we just knew we have similar themes in our work around human rights and social politics.” The show, then, is a two-person exhibition of artists who have a history working separately, together. Fontenot’s wall canvases are sparsely adorned with the emblems of Texan-American primacy: Jesus as a slogan, and bullish mascots as wall trim. Stafford has applied her couture sensibilities to parasols, high-society appliances that block out the light from their subjects’ sensitive skin. Here, they blossom in splendor, revealing the ways that femininity is accomplice to the system of supremacy that begat them.

The late Rick Brettell is a household name in the Dallas art scene, owing to his contributions to museum development, arts education advancement, and his scholarship in the visual arts. He worked at the institutional level; holding a private collection presented a conflict of interest, and so his own walls were not adorned with the same contemporary artists that he supported and lifted up during his time in Dallas. This show is a reflecting pool of Brettell’s impact on the North Texas arts community. The artists exhibited here were curated by Greg Metz, and the specific works were curated by their respective galleries as well as the artists. This means that the show is not an exact historical account of Brettell’s legacy, but rather an update of what visual art in the region has become since Brettell’s death in 2020. 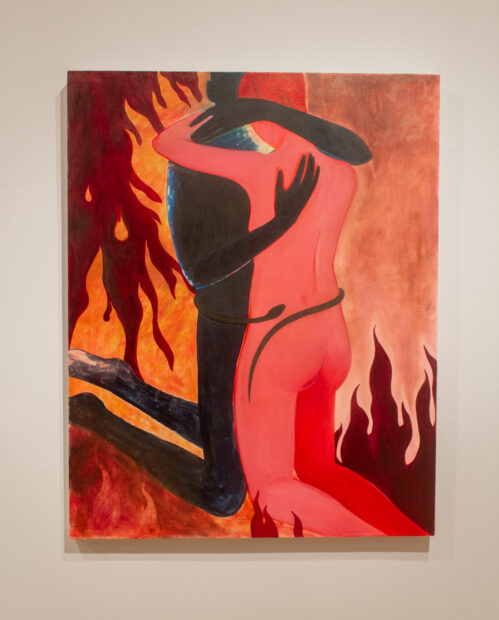 Naudline Pierre, “What Could Be Has Not Yet Appeared”, on view at the Dallas Museum of Art 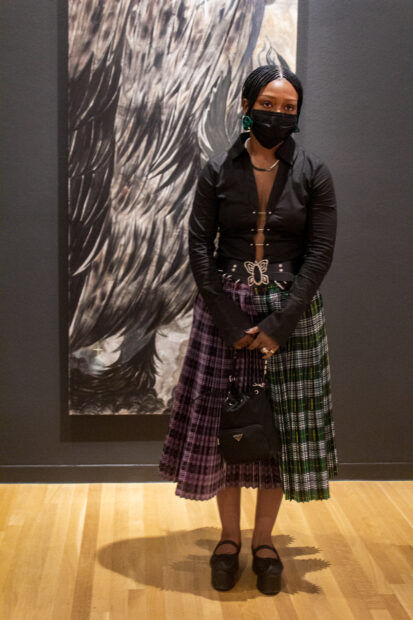 Pierre’s first museum exhibition is palliative treatment for the conditions of today. The isolation, disruption and upheaval of the 2020s might be addressed most immediately by a hug. The show highlights Pierre’s reassessment of traditional figure compositions by placing a recent work among the works of the European galleries upstairs. The juxtaposition reveals the difference between the types of embraces seen in historical works, which touch on arcane signals and societal ordinations. Pierre’s figures, consistently, are slumped into one another for support and rest. The homage paid to European history is outpaced by yearning for love, pure and simple. 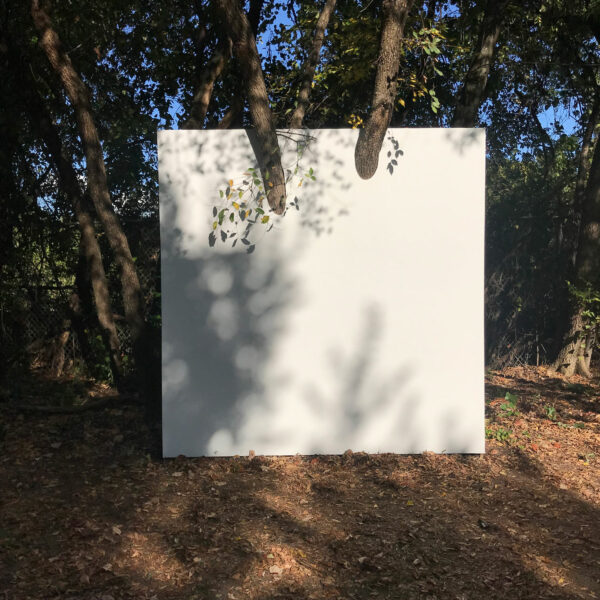 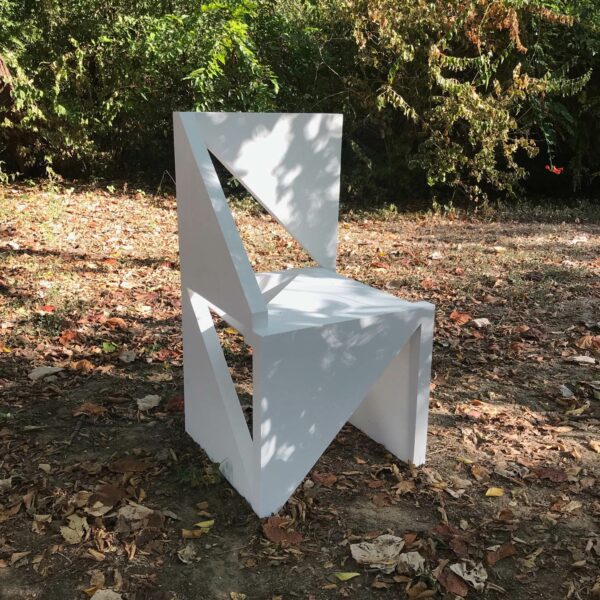 This group exhibition, curated by Nathaniel Hitchcock, explores the interplay between objects that are installed upon a site, meant to fit in neatly to the place they are interrupting. The works here, however, make themselves visible. The exhibition’s title, explained by the beautifully designed exhibition statement available at the reception, is a direct reference to an American company that sells artificial foliage, such as plastic hedges. Hitchcock’s exhibition statement references Timothy Morton’s theory of the “hyperobject,” which is quoted as, “the inception of humanity as a geophysical force on a planetary scale.” These themes are touched on with grace, in a semi-constant theme of white being a surface that can reveal the marks that the planet makes upon them. This can be seen in Ricardo Morales-Hernanández’s Forced Autumn I-SDG-017-004 2017/2020, which endured hurricanes Irma and Maria while it was installed in Puerto Rico in 2017, and Letha Wilson’s Wall in Cedar Elm Tree, 2021, which receives the shadows of nearby trees, cast by the sun.

All photos courtesy of William Sarradet, unless otherwise noted.