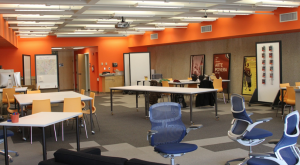 Artlab at the Hirshhorn Museum, Washington, D.C.. No Art. No Kids. No windows.

The Dallas Museum of Art has received a grant of $94,681 from the Institute of Museum and Library Services (IMLS) and the John D. and Catherine T. MacArthur Foundation to build a “Learning Lab,” described as “a new space where young people can connect with mentors and peers, using new media and traditional materials,” the lab “will help young people move beyond consuming content to making and creating it.”

The project is one of 12 funded by the IMLS to create similar labs in museums and libraries around the country. For this venture, the DMA will partner with the Perot Museum of Nature and Science, which will have it’s own lab. The exact connection is unclear, but planning begins in January 2013.

Nicole Stutzman, the DMA’s Chair of Learning Initiatives said the museum aims. “to instigate some cultural shift – opening up our museums to be more social, recreational, and immersive spaces for the teens learning in the 21st century.”

Everybody’s doing it: The Museum of Fine Arts Houston’s Kinder Foundation Education Center, funded by a similar grant, opened in 2011. Both projects are based on a concept packaged as “connected learning,” pioneered by YOUmedia, an initiative of the Chicago Public Library.

Brother Mike Hawkins talks about hanging out, geeking out, and messing around at YOUmedia Chicago.