DMA Checks in at One-Year Anniversary of New Freedom 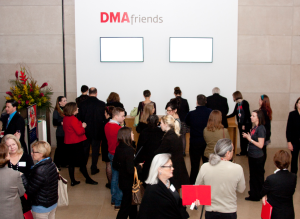 One year ago at the DMA: the first few dozen Friends arrive

The Dallas Museum of Art (DMA) announced that it has enrolled nearly 50,000 visitors in its DMA Friends membership program since its launch one year ago today. Touted as “the nation’s first free museum membership program” (a distinction between free entrance and free membership), the program has received a whole lot of positive attention in the past twelve months. In September, the DMA received a prestigious National Leadership grant from the Institute of Museum and Library Sciences (IMLS) to teach the program to the Denver Art Museum, the Los Angeles County Museum of Art and the Minneapolis Institute of Arts. In November, the Museum received anonymous gift of $9 million, $4 million of which was for the new Friends program.

The program has been written up in the New York Times and papers have been presented about it at conferences, but nothing beats 50,000 new friends! (Well, technically, only 95.4% of DMA Friends self-identify as new members.)