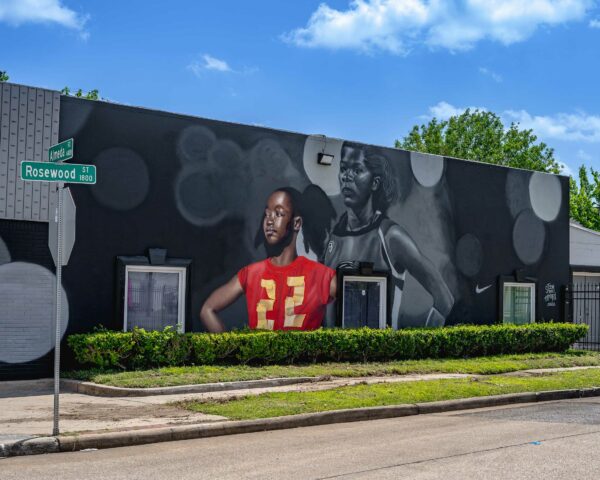 In April 2021, Dallas-based artist Jeremy Biggers took his shot and fired off a tweet that simply read, “I want to paint a Sheryl Swoopes mural in Houston or Lubbock. Someone get me a wall!” From there, the rest is history.

Almost immediately after Biggers sent that tweet, Jordan Rogers, a friend of the artist and brand director for Nike at the time, reached out and expressed interest in the potential project. Within a few weeks, Rogers arranged a meeting for Biggers to pitch the idea both to other Nike officials and to former WNBA star Sheryl Swoopes.

“It’s tough to imagine the first player ever selected by the WNBA being underrated, but I don’t think Sheryl Swoopes has been recognized adequately for her role in making women’s sports what they are today and laying the foundation for being a woman in sports in general,” said Biggers. “I wanted to use my skill set to honor her in Houston or Lubbock, the two cities in which she spent the majority of her playing career.”

After searching for a wall for over a year, the decision was made to paint the mural in Houston on the office of Forward Times, the South’s largest Black-owned and independently published newspaper. 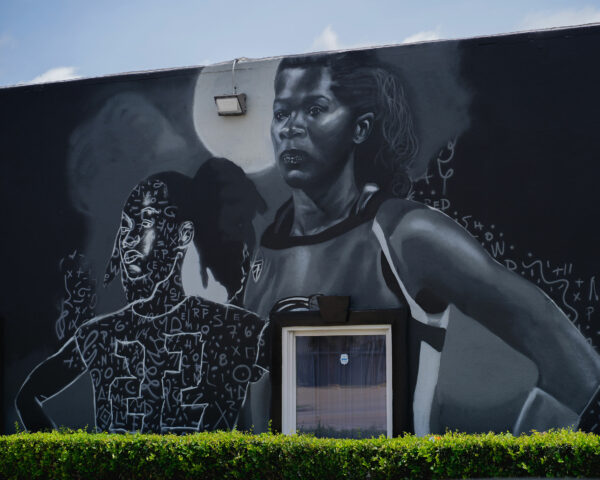 An in-progress shot of Jeremy Biggers’ mural of Sheryl Swoopes

Wanting to honor Swoopes as well as acknowledge future generations, Biggers said, “The design I landed on for the mural was a pre-teen girl looking to the left, representing the past, in full color in a triumphant and determined heroic pose, while Sheryl stands behind her, having her back in the same pose. I wanted the girl to have a homemade jersey. Growing up playing basketball myself, my friends and I couldn’t afford to buy the jerseys of our favorite players, so we would use masking tape to create our numbers and spend hours imagining we were our heroes shooting buzzer beaters until our rolled up short sleeved t-shirts were soaked with sweat, causing the masking tape to lose adhesion. I wanted that story in the mural because I feel everyone who grew up in a similar environment would recognize it immediately.”

Biggers completed the mural and unveiled it on Friday, May 27. The mural marks the first by the artist portraying someone that is still alive. He commented that waiting for Swoopes to arrive to see it was somewhat anxiety-inducing, but was a moment he will never forget.

“I could not be happier that we got to finally make it happen,” Biggers remarked. “This entire project has been easily one of my absolute favorites of my career.”

Biggers’ mural can be seen on the outside of Forward Times at 4411 Almeda Road, Houston.

A three-time gold medalist, Sheryl Swoopes played basketball at Texas Tech University before joining the WNBA in 1997. She won four straight championships as a member of the Houston Comets (1997-2000). In 2016, she was inducted into the Naismith Memorial Basketball Hall of Fame.

This and That: Jeremy Biggers and Kevin Todora