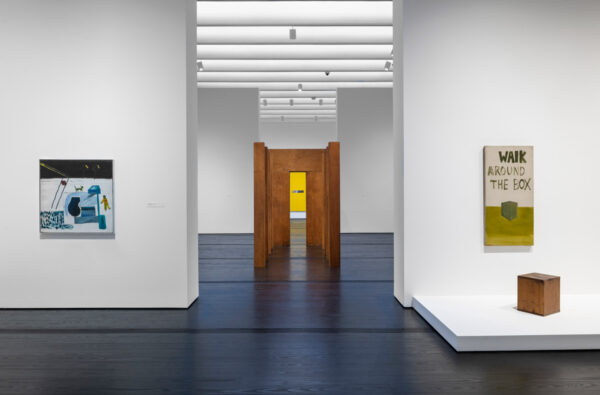 “The Menil Collection is pleased to announce Walter De Maria: Boxes for Meaningless Work, the first museum exhibition survey of the more than fifty-year-long career of American artist Walter De Maria (1935–2013). The show presents the artist’s remarkable exploration of space, time, and spirituality through works from the museum’s permanent collection, most of which have been recently acquired and never before publicly displayed.

De Maria actively participated in New York City’s avant-garde music and performance circles in the early 1960s. The artist’s radically simple works from this time, with their modest materials and construction, embody the up-and-coming ideas that led to development of the Minimalism, Conceptualism, Earth Art, and participatory art movements that shaped De Maria’s career in the years that followed.”

“Arturo Herrera: Constructed Collage will feature more than 20 artworks from Ruby City’s permanent collection, including several recent acquisitions on view for the first time. Celebrating Herrera’s expansive practice, the show will feature works ranging in date from 1998 to 2019, including collage, a cut felt wall-hanging, drawing, painting, printmaking, sculpture and an offsite wall painting. The exhibition, curated by Elyse Gonzales, director of Ruby City, is the first to examine the enduring importance of collage through the artist’s ongoing use and expansive conception of the medium. Constructed Collage demonstrates how this art form continues to shape all facets of the artist’s practice.

Herrera became well known in the 1990s for his abstract collages that featured intricately cut forms taken from popular culture source material with portions of recognizable elements that only hinted at potential meanings. Over the years, he has continually mined this art form, viewing collage as the quintessential expression of, as he states, “our fragmented world which we make sense of by associative thinking.” As a result, all his work is deeply informed by collage, using it as a means of expression and guide. When making any of his works, no matter the medium, Herrera relies on a unique visual language rooted in the methodology of collage—cutting, fragmenting, layering.”

“Each of the seven new paintings in the exhibition Is This Living? explore one of the Seven Deadly Sins, the Christian tradition’s definitive list of humanly vices. They are each an intimate, personal experience of the artist’s relationship to the faith she was raised in, her relationship to herself and her inner motivations. The Dallas-based painter is known for her portraits, mostly of females, that evoke vulnerability and strength within the figures, either through posture, physical interaction, or compositional format.

Gesture and poses are presented as powerful, whether through sexuality or assurance, while facial expressions and anatomical detail are left reduced and neutral within empty or vague settings. The paintings presented in Is This Living? are densely packed with symbolism as each work becomes a thorough and personal exploration by Vaniecia of our complicated relationships with lust, envy, pride, wrath, greed, sloth and gluttony.” 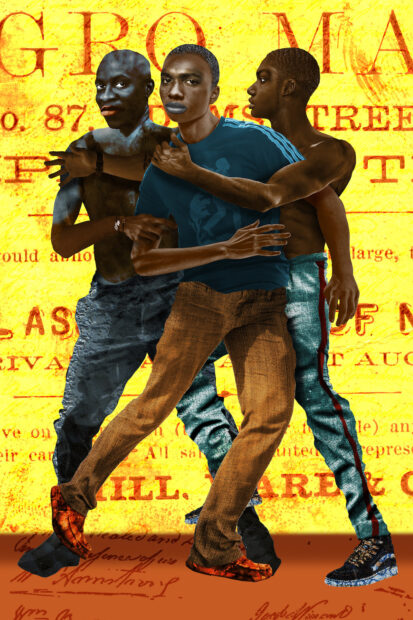 “Ivester Contemporary is excited to present, PYRE, a solo exhibition of new work by Dave McClinton. PYRE is a continuation of McClinton’s Black Life series, an ongoing project which began in 2015 and aims to illustrate the inner life-cycle of Black people in America. This newest body of digital collages explores the idea that the anger of the African-American community is often portrayed as a threat, whereas the anger of ‘traditional’ communities is depicted as righteous. This paradigm stokes the fires we try to simultaneously hide and harness. McClinton’s intention is to seize this moment in history to create work that compels his audience to seek out empathy and activism for the sake of others, and to turn this spark into a fire.” 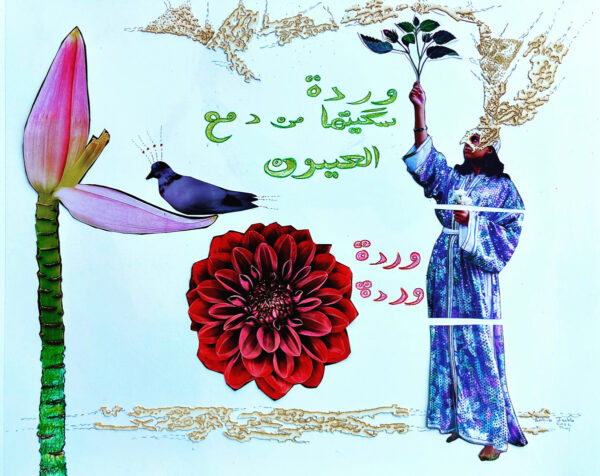 “In March of 2020, my son passed away, and COVID locked us up. My world shattered. I stopped painting. I started making these collages to express simple ideas. Some are based on Middle Eastern songs, some on narratives in my head. It felt cleansing.

Lahib Jaddo is an Iraqi-born artist based in Texas who has worked across the mediums of painting and sculpture for over three decades. Lahib was born in Baghdad in 1955 to Turkmani parents from Kirkuk and Tel-Afar. The first of five siblings, she spent her formative years in Iraq and Lebanon before immigrating to the US in 1976, eventually settling in Lubbock, Texas, where she earned a Master of Architecture and Master of Fine Arts at Texas Tech University. She began her studio practice in 1990 and went on to teach for twenty years in the College of Architecture at Texas Tech University. Jaddo’s work initially focused on painting, but gradually shifted to mixed media and sculpture. She has exhibited her work nationally and internationally and is the subject of the award-winning feature-length film, Jaddoland.”