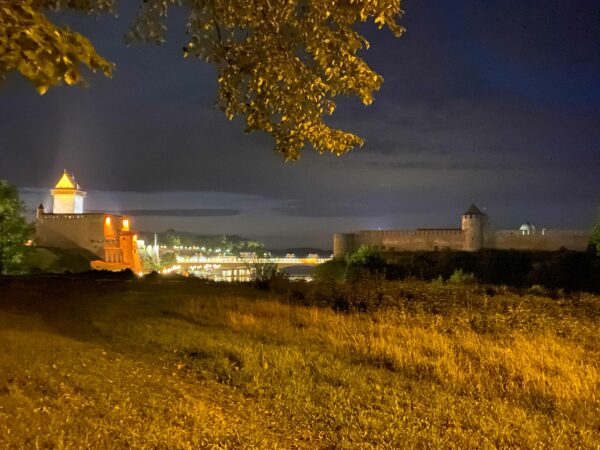 I have been back in the states for months now. My travel to Europe happened in the summer of 2021, when a heat wave unlike anything seen in the Baltics settled over the region, and when a wave of Russian imperialism was at its initial stages of escalation. The world was complicated: COVID continued to rage through Europe and do even more devastating damage to Russia — a place I fully intended to travel to — but the virus and international immigration had other plans. I learned that no place can do anything perfectly, which makes sense since perfection is an impossibility and we humans have a tendency to mess things up anyway. No place was following a single set of rules or guidelines, and ultimately my first rejection into Poland was due to a misunderstanding in COVID documentation.

During my time in Eastern Europe, especially in border areas, I witnessed growing tensions with Russia. Most of the people in Narva felt no animosity toward their neighboring country, because they had lived such a seamless existence for so long before COVID changed everything. But through my time traveling, Russia always felt like an impenetrable place, a country shrouded behind a thick curtain of pine trees where information and access just seemed to stop, where darkness seemed to settle in the distance.

I returned to Narva. I also went to the town of Sillamäe in Northern Estonia, which is on the mouth of the Sötke River. During the Soviet Union, Sillamäe was thriving economically because of its natural uranium oxide mines. It was also surrounded by concentration and labor camps during the Nazi era, which employed forced labor in the mines. From here, I took a boat ride along the Narva River — Russia on the right, Estonia on the left — up to the northern beach of Narva-Jõesuu, a resort town tucked up into the pine trees, where the Estonian forest opens to the Gulf of Finland with calm obsidian water and ash-gray sand. The town was originally the playground for the Russian elite, and remnants of their wealth — massive manor houses — lie tucked in the pine forests. 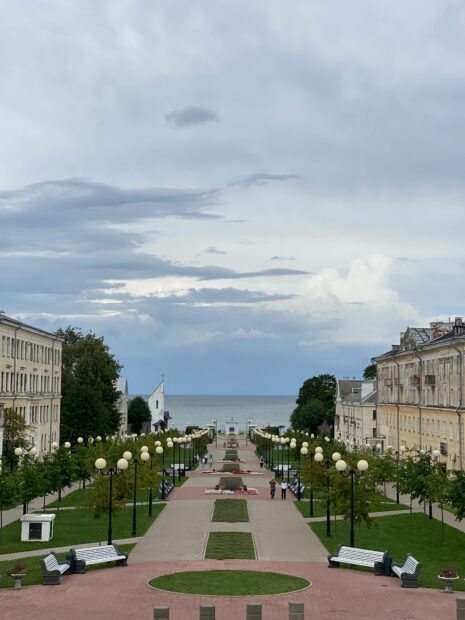 The city center of Sillamäe, overlooking the Narva River and the Gulf of Finland

I touched more borders along my trip than I am able to write about. I crossed under bridges, I stood on the edges of cliffs looking from one side to the other, I wandered through neighborhoods being gentrified, and I stumbled along language barriers of here and there. In the end, this story was not just about my family. I had to let go of finding certain information about my great grandparents and instead embraced the lessons I was learning in the moment, which helped articulate the constant feeling of inadequacy that shaped so much of me, and reshaped my own biases and stereotypes. 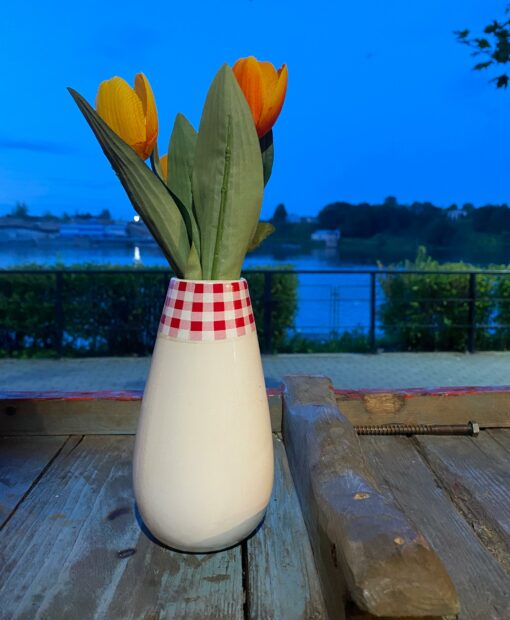 Fabric Tulips at a restaurant overlooking the Narva River

Now, months later, as I sit back watching the situation playing out with Ukraine and Russia, I think about all the lives that will be lost because of a megalomaniac with an itch for conquest. I also think about the stories that we will lose once again, because to conquer a place means to conquer its history. Any archives that were protected are most certainly in jeopardy, and the history of modern-day Ukraine will lie with its population, which will no doubt fight until there is no fight left, as the rest of the world watches in horror.

Given the opportunity, a border is an easy thing to find. History and stories are malleable in the chaos of memories, and ours is a world that has never been and will never be static.

In the months that I have been back between Mexico and the States, work has brought me to Las Cruces, New Mexico, where I have, once again, had to re-evaluate what I consider a border. Most of my life it was a river dividing two places — on one side it was called the Rio Grande, on the other it was the Rio Bravo. But here, it is neither, and the river runs north, up to Colorado like any other body of water existent and non-existent in the harsh and beautiful terrain of the desert. 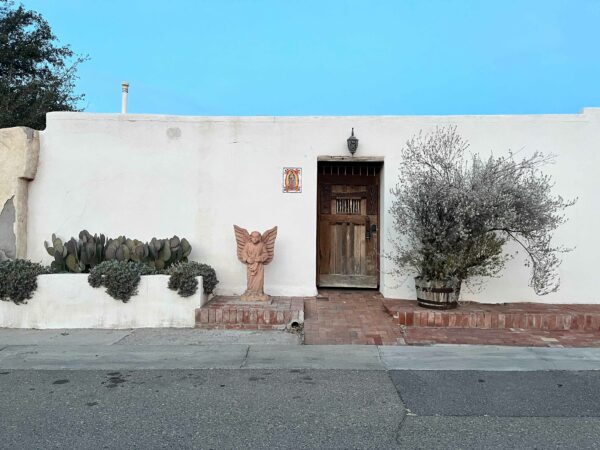 For the last few months I have been living in a historical adobe home in Mesilla Plaza. The home was originally built to be the city’s customs and immigration office. Mesilla was the border city on the Mexican side from Las Cruces, and for many years that line was so contested it was actually a no-man’s land — not really Mexico and not really the States — until the Gadsden purchase in 1853-4 when Mesilla was chartered into U.S. territory. That’s when the plan changed for the customs and immigration office, because Mesilla was no longer a border town. Today, it is a residency program called Casa Otro, and it is my home in New Mexico.

I don’t know what constitutes a border. Over the years my definition of the word “border” has become fuzzier. I have learned about divisions that come from walls, language, geography, man-made structures, and unnecessary differences that cause conflict — something we are all witnessing currently. I have a hard time believing the next time I return to Ukraine it will be a totally different country, no matter the outcome. What I have learned is that there is no singular definition, and this means that at the end of the day a border can all at once be a line in the sand, a bridge over a river, an insecure immigration officer, an artist grasping for unnecessary retribution, a disgruntled journalist, and a maniac leader with no regard for human lives. There is no answer and there probably never will be because we all live at the border of our own opinions, our own histories, and our own self preservation. 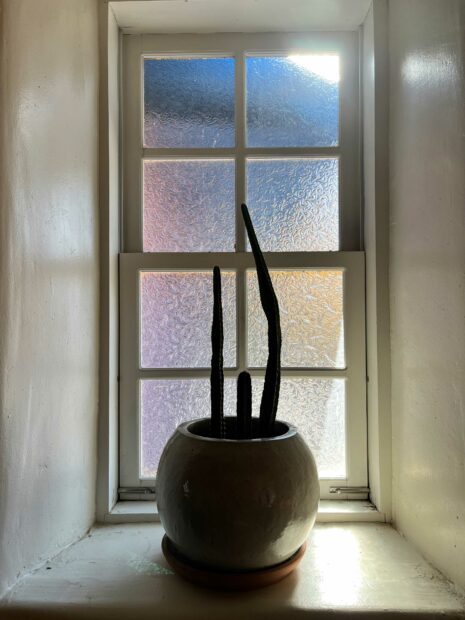 That is our fundamental human instinct, after all: preservation.

This is the first time I have been so public about my own story, and I owe a lot to the many who encouraged me to do so. I am forever indebted to Shalini Ramanatom, Chris Tomlinson, and Jon Revett for encouraging me to write about my grandmother and to shape her story into something that is also mine. Thank you to my tías, Jeannie, JoAnn, and Betty for sharing as much as you did. I have missed our coffee dates and laughter, and I think these conversations were exactly what we all needed, to reflect on our shared past while helping to transition to our present reality. Thank you to our dear departed Aunt Polly for being the reason we gathered, too; you always loved us unconditionally and I miss your independent spirit. To Carol, John, and Brian, I am profoundly grateful. You opened up so willingly to a stranger, and I am thrilled to have your friendship and kinship in my life. Thank you to my dear friend Christina Rees who saw potential in my writing, and to Glasstire for publishing. This was all an experiment, and I have been flattered and surprised by the response and readership. Thank you, readers, for that.

Thank you to the Narva Art Residency for your openness to experimentation and for shifting our plan so drastically. We started with a very public-facing project that turned inward and intimate because of the pandemic, and I am grateful for the residency’s trust — especially yours, Anne Mirjam, and the friendship that has grown from it. To Tiiu and the U.S. Embassy, this could not have been possible without your grant, and I admire your willingness to talk about difficult subjects through creativity. Thank you. 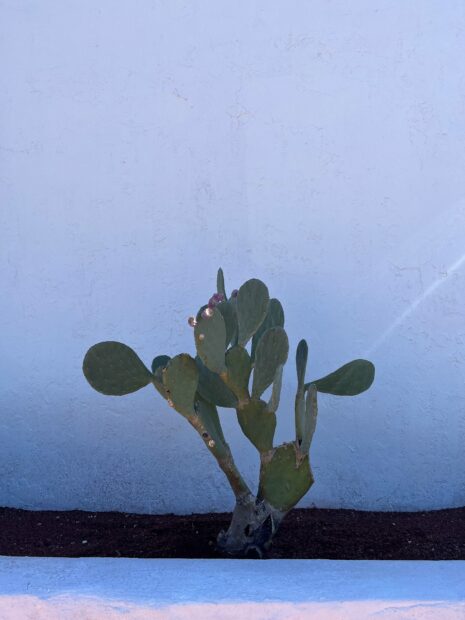 Detail of a cactus against a white adobe wall in Mesilla, New Mexico

Special thanks to Tiiu Vitsut, Filipp Mustonen, The Office of Public Affairs at the U.S. Embassy, Tallinn, Ann Mirjam Vaikla, and the NART Narva Artist Residency. Thank you to Dorota Biczel for sharing and clarifying so much for me so openly. Thank you to my cousins Carol Franco, Brian Nagurney and his father John Nagurney,  Aunt JoAnn Villarreal, Aunt Jeannie Cisneros, and Aunt Betty Moody Winters.