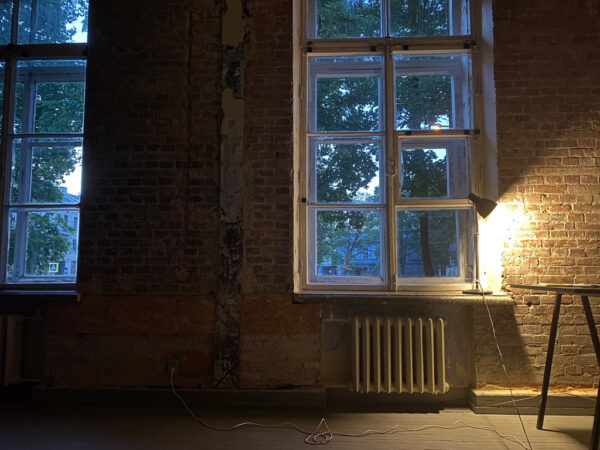 A view of the author’s Narva studio windows at 3:30 am.

I had been in the castle in Narva, Estonia, home of the Narva Art Residency, for three weeks. The story of our light detainment had spread amongst our communities, and after a little time and space it became something we could chuckle over — though I still kept my distance from Kreenholm, the abandoned factory on the Estonia-Russia border. My residency colleagues had come and gone, and I had been alone in the castle for more than a week as all of Estonia went on summer vacation.

Living in a castle sounds like a wonderful thing, and indeed, living in that castle was. But there is something about the architecture in old, cold places that starts to play tricks on you. The walls are incredibly thick and heavy brick, and the ceilings are high and expansive. But the rooms snake in and around each other so you never have a view of a single story in its entirety — and this castle on Joala Street was three stories tall. 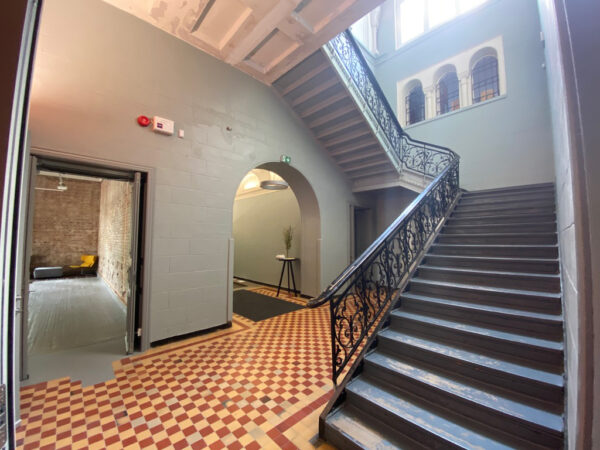 The entryway of the Narva Artist Residency. The interior has been renovated many times over the course of its history.

The architecture was developed to battle the weather — at least the weather before modern amenities such as central air and heat. In the mid-1800s when the castle was built for the manager of the Kreenhold factory, it needed to keep his family warm in the long, dark winters. To be clear, the building is not actually a castle — it’s just an extremely large residence of red brick that was built over the course of many years, and is noticeable by its many styles of architecture. It’s debatable how the residence’s interior has changed during its life, since it has seen a number of renovations over the years, but its exterior is striking and gorgeous. Its facade does not face the main street, a typical trait of architecture in the area, and a feature carried well into the Soviet Union. Instead, the main entryway is tucked back to the side, off the street and hidden from the bustle of traffic. The main street elevation features tall, stacked double-pane windows that allow light to soar into every room while blocking the blustery wind and cold. The flatness of the architecture is juxtaposed by a stepped triangular peak that seemed to soar up the rows of windows stacked along each elevation. The residence is sweeping in its height, heavy in its mass, and enormous in its gut. 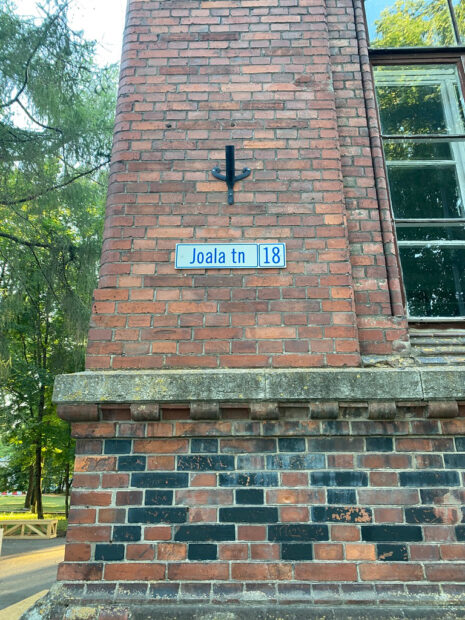 Joala 18, the address of the Narva Artist Residence which was the home of the manager of the Kreenholm Factory. 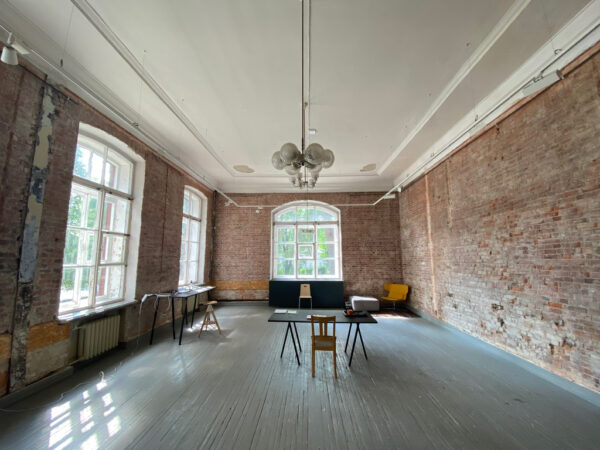 A view of the author’s studio at the Narva Artist Residency.

Yet somehow, in all this enormity, I felt like I was becoming trapped. The summer heat had descended with a surprising heaviness that no one had experienced in over one hundred years. It made the castle feel heavier, it made the walls feel thicker, and it made the preparation of morning coffee feel like a hike because of sheer travel time and distance: 56 steps down from my lofted bedroom, up the central staircase, around the upstairs foyer, and then the tree steps down from the original servants’ entrance into the kitchen. By the time my morning was all said and done, and I settled into the studio to work, I was already overheated and exhausted.

But the thickness of the walls did something different, too. They gave off the feeling of entrapment, of living in a bubble. The large windows made me feel removed from the outdoors, and I wandered through the castle in a solitude and quiet that slowly started to feel unhealthy, and a little ghostly. I had the sensation that if I didn’t find an excuse to leave, that I would become part of the walls.

It was always my plan to travel to Ukraine. Over the months leading up to my residency and my first few weeks in Europe, I had been corresponding with my second cousin, Carol Franco, and her nephew, Brian Nagurney. It was the first time I had connected with any family members related to my paternal grandmother, Ann Nagurney. In fact, her last name has always been a little foreign to me. My grandmother was a Moody through and through, and because of the physical distance between our family on the U.S.-Mexico border and her family in Philadelphia, as well as the proximity of genealogical relationships growing further and further apart, I grew up with no memory of her family. The Nagurney name was somewhat of a distant myth to me — a name that was once my grandmother’s identity, but that was another life, long before me.

But my interest in learning about the European side of my genealogy — which subsequently collided with my interest in our genealogical borderness — led me straight to the Nagurney family, thanks to a handful of coffee dates with my paternal tías. 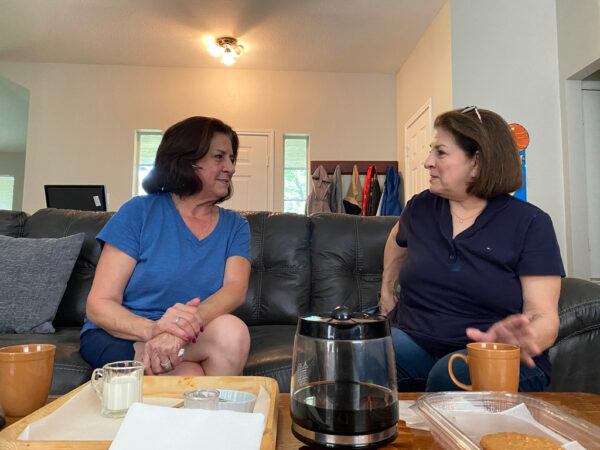 My Aunt Jeannie (left) and Aunt JoAnn (right) sitting on the couch telling stories about their grandmother. They are the first of two sets of twins my own grandmother had. 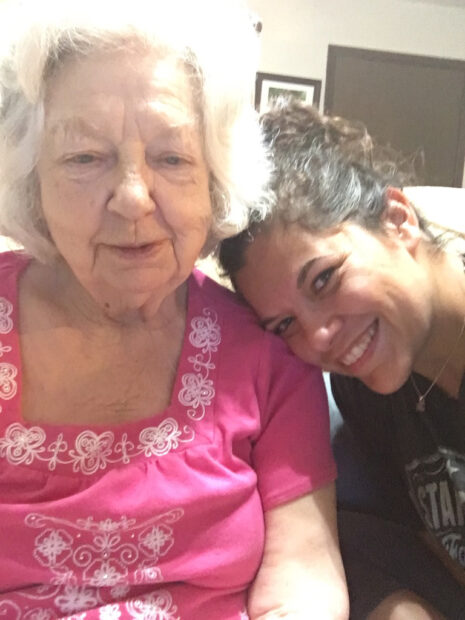 The last photo of the author and her grandmother. Ann Nagurney passed from complications of Alzheimers just before Thanksgiving of 2019.

My grandmother passed away from complications due to her worsening Alzheimers. Throughout my life we would talk about her parents and where they came from, and at some point I was told — either by her or by someone else in our family — that her parents were from Ukraine. I was also told that my lineage held every manner of Britishness, some French, Irish, and potentially Polish descent. Throughout my life I tried each of these identities in phases, a symptom of the fact that I didn’t know where I fit. The older I got, the more comfortable I felt in shedding the need to justify any whiteness, and as my own field of personal independence widened, identity wasn’t just about hierarchies of historical class, but rather a personal curiosity of understanding why I had always felt comfortable flitting between so many definitions.

I was never afraid of asking about family stories, either. However, as my interest in our family leaned more and more toward borderness, my grandmother’s mental health declined steadily, then rapidly, and her stories became a convoluted funnel of past, present, and future. It’s funny how people from the same family can have such different stories and memories.Through a penpal-ship with my cousin Carol, and a series of phone conversations with my cousin Brian, I had begun to piece more things together, and a trip to Ukraine was finally on the horizon.

In Narva, I had postponed planning for my much-anticipated trip to Ukraine. After my last visit to Kreenholm and my detainment, a fear-based complacency had settled over me, and I was overwhelmed by the fact that I neither understood nor could read the Ukrainian language. The odds of finding out any real facts became a distant possibility — archives that I wished to visit had revised their policies and limited their hours due to COVID, and the archives’ holdings themselves were spotty at best. Ukraine is the European equivalent of a developing country that has experienced decades of war and conflict; not only had much been lost, but much was also intentionally destroyed. After all, the first step in conquest is to erase the past.

I had been in Narva long enough, and my fear of becoming a ghost in the castle overshadowed my fear of traveling to Ukraine. So I packed my bag, made the trek back to Tallinn, purchased my COVID insurance, and nervously boarded a plane. I had decided that if I couldn’t visit any archives, then at least I could get a sense of the place where my great grandparents came from, and what the country could have been like. When the plane landed I couldn’t help but chuckle to myself, because finally, I was back in a land of chaos. 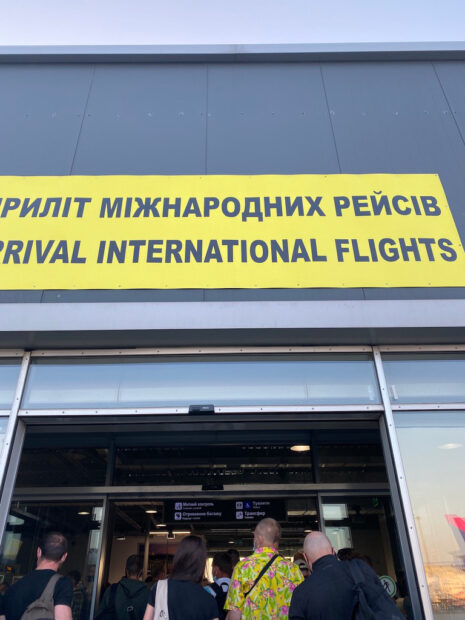 Arriving at immigration in Kiev, Ukraine.

Thanks for this wonderful series; can’t wait for the installment(s) on Ukraine.

Nicely done Leslie. So happy you’ve got to be in touch with the cousins. So proud of you. Travel safe always. Love you.

I’m a Nagurney, too, Leslie, and I’m not sure how I’m related to your Grandmother Ann, but I’d be pretty sure that there is a family tie. My Nagurney side of the family lived in a village in Southern Poland named Cieplice. Small world!

Hi Jude! What a small world we live in, thank you for responding, and I will drop you an email right now!