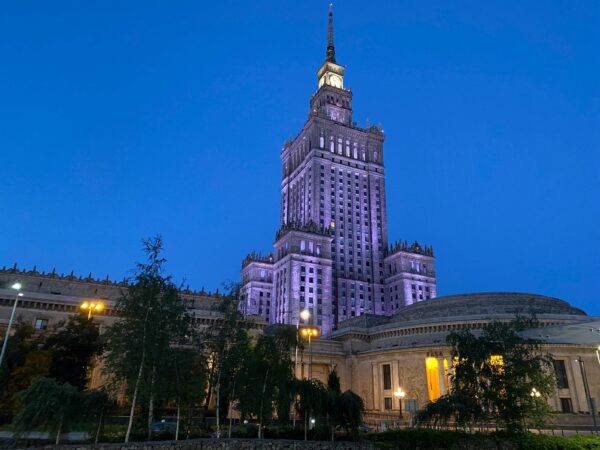 The tower of the National Palace of Culture and Science lit up at night.

I arrived in Warsaw, Poland the afternoon following my ordeal trying (and failing) to cross the border at Lviv. My second experience with immigration was smoother, though also unwelcoming. The best I could piece together was that I had been denied entry through the walking border because of a COVID-related documentation issue and a whim. According to European Union’s guidelines, I had everything necessary to cross easily. According to the angry immigration officer, I did not.

I made it to Warsaw feeling bittersweet that I had missed so much of Poland. I was ready for this leg of my trip to be over and to return to Estonia. I felt I was not just denied entry into Poland, but denied a key moment of border crossing that might have been a daily occurrence for my ancestors, based on one of the versions of their story I had been told. The border between Poland and Ukraine had shifted so drastically in the 19th and 20th centuries — during both the World Wars and after — and so had the identity of the countries themselves.

Before they were Poland and Ukraine, they were the Austro-Hungarian Empire, in parts. (They had also, at one time, been Galicia, a contested area comprised of southeastern Poland and western Ukraine.) Before the start of the First World War, Europe was a large collection of empires occupying; and that would be disassembled and reassembled throughout wars and territorial disputes. Prior to this, however, the Austro-Hungarian Empire was a dual confederation of territories and ethnic groups living in Austria, Hungary, and a mass of powerful territory ruled by the unification of two kingdoms in one of the largest empires in European history.

Ukraine was celebrating 30 years as an independent country while I was there in 2021. By this logic of history, another family myth became apparent through the stories I had been able to cull together.  I have no idea how or when I was told that my great grandparents were from Ukraine, because technically, Ukraine didn’t exist in their lifetime. Their story has been lost in the family myths, and is one I’ve had to revise myself after nearly a lifetime of believing their origin as a fact, when it was, in reality, factually untrue.

In North America, we haven’t recently seen shifting borders and the reconfiguration territories — the United States has retained a relatively similar shape for a few hundred years, and while border lines create identities that are somewhat seamless, the realization of a place existing when it didn’t previously exist was something I had to grapple with. In my Western mind, I was happy thinking of Europe as a place of order and relative calm. Since I had arrived in Estonia, I faced times that contradicted that ignorance. Borders are seamless, I know this, yet I hadn’t actually applied this knowledge to what I was learning about the European side of my genealogy.

My great-grandparents immigrated to the United States between 1906 and 1907. They would have immigrated long before World War I, or the events leading up to the war, and would have grown up at a time that the Empire was seeing vast technological advances, a growing middle class, expanding cities, and general prosperity overall. At least that’s what history tells me. Family history, however, always has its mysteries. 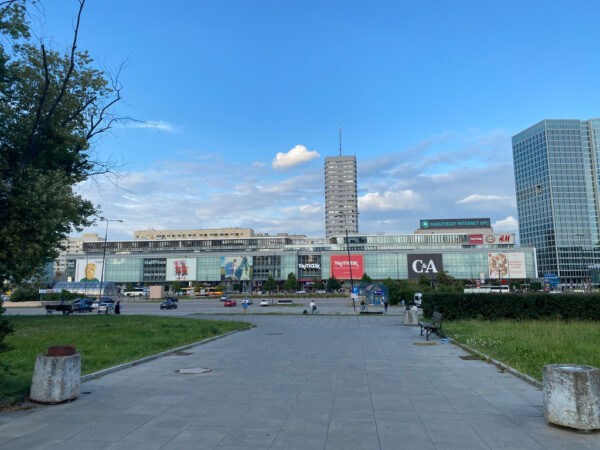 The city center of Warsaw. The demarcation of the Ghetto wall is on the immediate left corner of the shopping mall.

But, I had made it to Poland. And more importantly, I made it into Poland. Perhaps it was my immigration experience in Lviv lingering in my system, but the feeling of aggression never really went away, and I had an immediate sense of culture shock after being in Ukraine for almost a week. Warsaw, by comparison, was fancy, or at least the parts I was seeing were. It was very obvious I had returned to the European Union and was back in a land of thriving capitalism. Skyscrapers filled in the skyline of historical towers and architecture, and cranes dotted the empty spaces between, a sure sign of economic growth. From my arrival, Warsaw felt strange, like a shiny new layer meant to distract from any digging past the immediate surface.

I was only going to be in Warsaw for two days. My negative experiences reentering the EU made me anxious to return to Estonia. In fact, the only reason I stopped in Warsaw was because all the flights to Estonia had a layover in Warsaw anyway. I booked an apartment in the city center with a balcony overlooking the National Park Świętokrzyski and the Palace of Culture and Science. I was smack in the middle of the city, but what I didn’t understand about my location when I booked the place was that I was also on the border of what was once the Warsaw Ghetto. 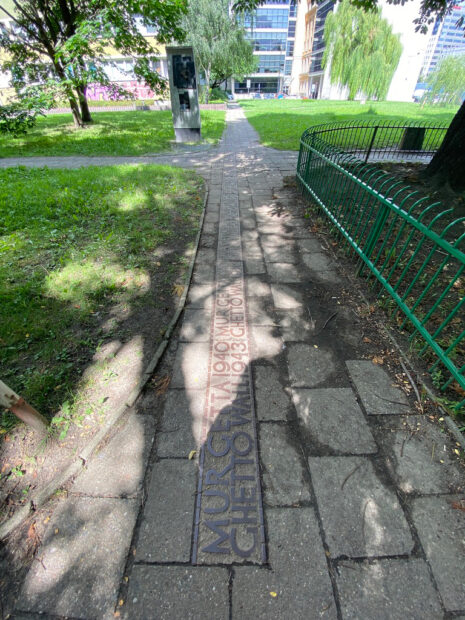 Perhaps it’s a matter of the history of World War II and the fact that the weight of the Holocaust is such an integral part of the international identity of Warsaw, but the layers of capitalism and commerce obfuscating the past were unnerving. However, in a way, it makes sense that if the Holocaust was the greatest identifier of a place, that place would want to move on from that history. It was unsettling to find, steps away from my apartment, a historical marker commemorating the wall dividing the ghetto from the rest of the city directly across the street from two H&M stores on either side of the plaza. 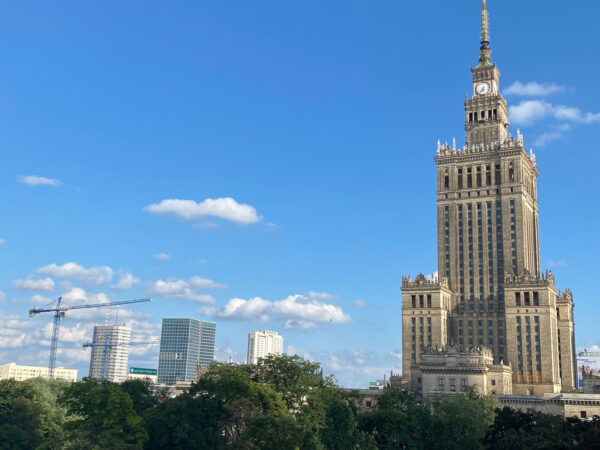 The ghetto was the largest of its kind and separated up to 900,00 Jewish people from the rest of the city in an area of only a few square miles. It was surrounded by a brick wall that grew taller and longer with every passing day, while the residents who were housed in it received no information and were simply told to follow orders. Imagine the chaos and confusion. Every day, there was a new rule to follow, a new curfew, a new arm band to wear, a new layer of brick on the wall — a border that divided a city within a city.

Us humans have a thing with building walls. 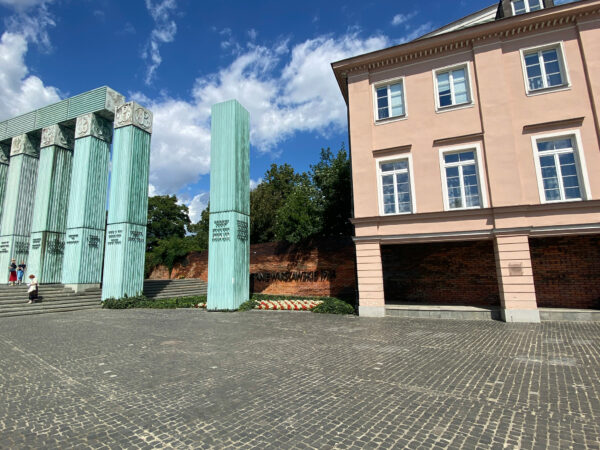 Monument commemorating the Warsaw Ghetto. A small remainder of the original brick wall can be seen behind the copper pillars on the left.

I had a hard time reconciling the past with the present, and it was through a conversation with a friend many weeks later that I realized much of Warsaw, and possibly much of Poland’s actual population, is made up of those who were forced to relocate. Because of the 20th century wars, there was so much genocide and mass deportation that in the aftermath the country was sparsely populated The Soviet Union forced people to resettle throughout Eastern Europe, Warsaw included.

Imagine, then, coming from a place where you are unwanted and forced to leave, then settling in a place that was conquered by the country that forced your deportation. Imagine being in the conquered country, where so many of your loved ones were massacred, and being forced to accept and live amongst those who came from the place that participated in many of the massacres. It’s a perfect storm for the cultural animosity and antagonism that has now become a sadly and deeply embedded part of Warsaw’s cultural history; there are reminders of it everywhere.

I began to see the WWII markers and commemorative plaques differently. I had never been in a situation where the war and its genocide were still so present; indeed, in the States it seems like a distant history that we have begun to forget in our collective memory. In Warsaw, it was everywhere. It was a defining part of the city’s present, and it made sense that the glittering promise of capitalism could provide a new chapter for a new generation. 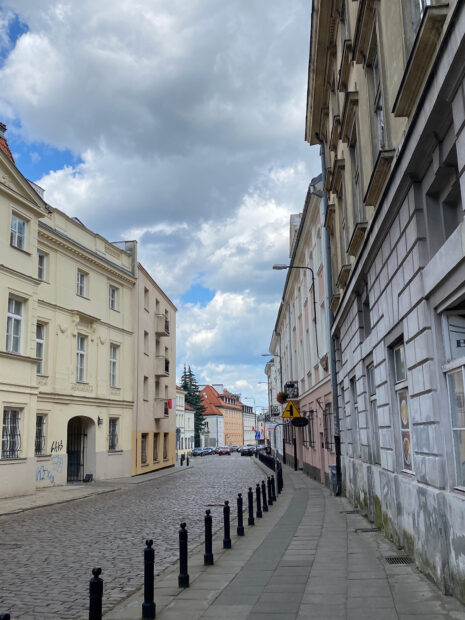 A street in the Warsaw city center

Special thanks to Tiiu Vitsut, Filipp Mustonen, The Office of Public Affairs at the U.S. Embassy, Tallinn, Ann Mirjam Vaikla, and the NART Narva Artist Residency. Thank you to Dorota Biczel for sharing and clarifying so much for me so openly. Thank you to my cousins Carol Franco, Brian Nagurney and his father John Nagurney, Aunt JoAnn Villarreal, Aunt Jeannie Cisneros, and Aunt Betty Moody Winters.

Poland is literally 3 times richer in terms of gdp per capita purchasing power.