If I had my druthers, the climate of Central-South Texas would chill the fuck out starting September 1st. We’d all wear long sleeves and closed-toe shoes, and brrrr cheerfully from under our wool hat brims, our noses tingled by keen breezes a-glitter with wintry promise as the foliage turns (not-literally) to flame… and it’s not ever, ever gonna happen, unless global warming works out super differently than I understand it to.

Still and all, though, Fall is upon us, at least in the administrative sense. God help our electrical grid what with all the school air conditioners running (back-to-school upside: Chupacabrona can at last resume my habit of quiet lunches at Chuck E. Cheese!)

It’s hard for me to imagine Fall, since I write this in a relentless, rainless, oppressive August, but one day, hopefully not too distant in future, it will not be one hundred and something fucking degrees every day for weeks.

Furthermore, many interesting art events are planned across our stately zone, and here are some I think you should consider checking out. Hell, it’s not so long a distance between all these venues, you could see every last one. 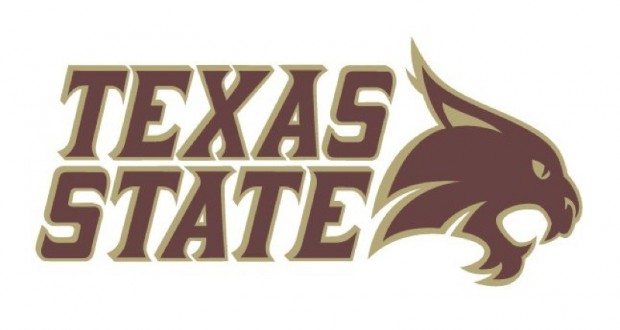 Opening on October 24 is Reciprocal, a dialogue of abstract works by Czech-born, Houston-based sculptor Hana Hillerova, and the geometric wonders of  Susie Rosmarin, originally from Brownsville, now often showcased by the lauded Albright-Knox Gallery in Buffalo, New York. From the advance materials:

In this exhibition, the sculptural works of Hana Hillerova and the paintings of Susie Rosmarin form a reciprocal relationship that could find roots in Euclidian geometry. The parallel nature of these optically linear works provides a context for each other in which line is fully expressed, explored and exploited.

This makes sense, especially because, look: 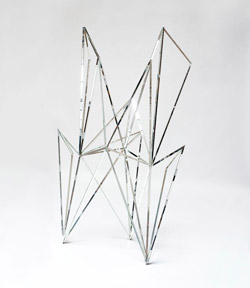 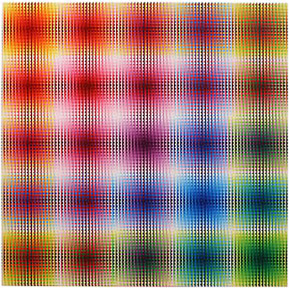 I’m going to have to read up on Euclidean geometry, maybe, but meanwhile I like what these two images, at least, do to my brain, even as small JPEGs. Seeing them at Gallery I on the Texas State campus ought to be bracing and stimulating and all poking at your eyeballs in a fun way.

Also at Texas State opening October 24 but in Gallery II, a video installation by William Lamson seems promising. Apparently, using a giant wheeled lens-like apparatus, Lamson drew a giant arc into the Mojave Desert using the sun’s rays to melt the sand into a glassy surface. This was a performance piece done over the course of one day. It’s called A Line Describing the Sun.

There’s a lot going on creatively at Texas State, including a nationally-recognized MFA in Creative Writing program and a relatively newly sprung contemporary art center.

And in SAN ANTONIO…

Fotoseptiembre is a September-long multi-event dreamt up, orchestrated and partially curated by SA artist Michael Mehl. It’s a city-wide festival of  photographic arts, from the historical to the sorta erotic, somewhere, usually. So for all September, there’ll be photographic exhibits at every conceivable venue, from the big museums to smaller, out of the way galleries like  Bihl Haus Arts. The Fotoseptiembre calendar (linked to above) is informative and a good resource; check it out. Also, Fotoseptiembre marks one of SA’s art festivals that makes terrific use of the Instituto Cultural de México and UNAM; often, really excellent contemporary art from Mexico shows up there. This year, there seems to be several exhibitions of Taiwanese artists; Taiwanese artists participated in this year’s Luminaria Arts Night, as well. Somebody has a crush on us!

In non-photo-land, do not miss By Permit Only at the Guadalupe Gallery, the contemporary art space of the Guadalupe Cultural Arts Center. Sure, it already went up, but it stays up until November 19. I hear wheatpasting’s gone by the wayside along with chandeliers and whatnot, but they keep saying fiction’s dead, democracy’s dead, capitalism, Zsa Zsa, etc etc. And in this installation, curator Patty Ortiz has called on a roster of Texas heavyweights, and the result is as good a survey show of 2D work being done down here as any. Some of the included artists’ work are naturals for the medium — for example, the sharp, graphic images of Beto Gonzales (full disclosure; a close friend and collaborator of mine), who contributes a wall of trickily subversive wallpaper. The deservedly-vaunted portraits of Vincent Valdez also feel natural as large-scale incursions into public space (or that’s the thought experiment behind the show, anyway; the stuff’s in a gallery, but as metaphor for the street).

But Anne Wallace? Her work traverses abstract video art and large-scale public art, tends towards the thoughtfully monumental, or the cerebral. I’m not gonna describe her wheatpaste work, except to say that somehow, I immediately knew which was hers, and laughed out loud at her proficiency with humor and deep thought about public space. I also love Gabriel Bernal’s scratchy, eye-catching character and the enormous shimmering waves of…light? flesh? by Rodolfo Choperena, Devon Dikeou’s outrageous closet and Ethel Shipton (another good friend)’s stark restlessness. And Joshua Bienko’s dancing feet are beautiful.

I couldn’t find any good images online (grr) so here’s a video promo for the show.

Also on tap for Queer States: a live performance by CHRISTEENE. 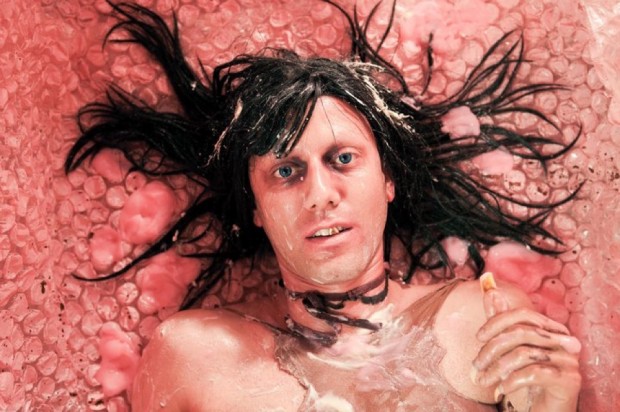 I’m a litle scared of CHRISTEENE.

Also last Spring, I saw and wrote about MIXMASTERS: This Is Who We Are, a duo of shows in which Austin artists exhibited in San Antonio, and then San Antonians exhibited in Austin. At the Austin-in-San Antonio show at the 1906 SMART space, curated by Leslie Moody Castro, formerly of Arthouse, I encountered this character, performed by Paul Soileaux. There were a couple of CHRISTEENE videos on display, which was maybe not the best way to encounter them. They’re music videos, and you couldn’t really hear the music well in the gallery.

CHRISTEENE is a R&B-hip hop transgendered sex worker video vixen fallen on rough times. As it happens, I also have a friend in New York, John Bowman, who does a variation on the scare queen terrorist drag genre, via a character called Christine.

Christine and CHRISTEENE are very different. Seeing CHRISTEENE after having some familiarity with the Christine character created some serious cognitive dissonance in me, and brought forth, not surprisingly, a shitload of confrmation bias when I wrote about her. I saw Christine as fragile, all-too-human, her bizarreness wrought from a willingness to be completely awkward, her star dreams skewed, unable to communicate her star quality except in glimpses of shared fantasy.

CHRISTEENE, on the other hand, has “a demon in [her] hole that wants to work your stinky pole.” That’s a lyric. It’s horrendous, and very, very funny. And her product, as I’ve seen it (i.e., not live) is slicker, crafted, and believable as a subgenre both of drag and of hip-hop. On the night of the show, it came off to me as mean-spirited, armored, and hipsterish. CHRISTEENE is an ethical morass; is she identifying or scourging with this character? Whom if anybody is she meaning to celebrate, and whom, through her genuinely shocking antics, is she meaning to undo? The whole thing made me angry, in what I now see as kind of an Archie Bunkerish way.

CHRISTEENES’S work stayed with me, though, and I ended up watching her videos, all of which you can see here. The wordplay is deft, bold and touched with pathos, her physical person is mesmerizingly alarming, and her backup dancers are highly committed. (Here is an interesting essay about Christeene as problematic from the standpoint of academic discourse that expresses some of my concerns, too, but fancier.)

In the end, though, the sheer force of CHRISTEENE causes me to reverse my earlier opinion. She still makes me nervous, but I believe in her at least in video form. I may go to the performance. I think I will. Eeeek. It’s on September 9.