“…and the moon rose over an open field.” 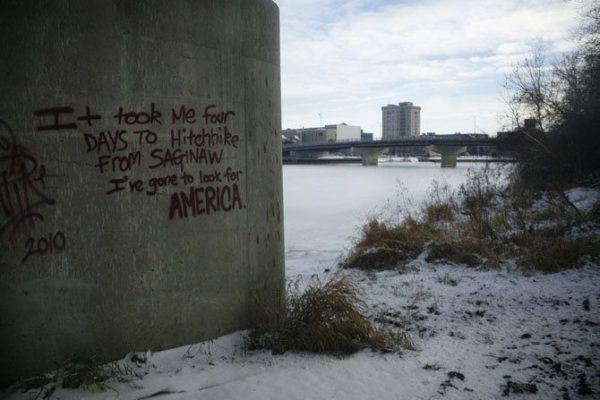 It’s August 21st. I’d be in Lost Springs, Wyoming right now if I could. The wish to be in The Path of Totality, fed by a couple of short stories read long ago — Total Eclipse, by Annie Dillard; The Story of A Panic, by E.M. Forster, but I’m also just curious. During the hour I was in Lost Springs in May 2016 I saw not a person one.

Anyway, back when I was headed toward Bonanza, I’d had a weird breakfast in Colorado City, and was glad to get out of there, but just then a digression was forced on me by a fortuitously over-heated radiator. Turns out there was a creek right down there, just a little ways off the road, so I took the 5-gallon container that is always in the truck down to get some water. So I’m now unexpectedly following a new line of endeavor, when a second circumstance of unknown time and space occurs. A rattlesnake, though easily avoided, is right there on the bank of the creek. Had the truck not red-lined right there and right then, I would have lived the rest of my life never knowing that that snake was there by that creek.

Even more surprising, on my way back up the embankment with the water, who do I see but Pernell Roberts. He’s dressed in black of course and slightly see-through. He’s not exactly looking for a ride, but I give him one anyway. Apparently he is looking for some kind of contact, because it doesn’t take him long to confide that he’s “damn sick and tired of living at home.”

By now we’re too far up I-25, which is crawling, so at Roberts’ suggestion I turn east and go about 30 miles to a road that pretty much parallels the interstate all the way into Wyoming. There is absolutely no one on this road for miles, which seems strange since our route is an obvious alternative to a highway that was practically a parking lot.

Then somewhere between Kiowa and Greeley the radio tells us that we are in the near vicinity of a tornado that is heading north on a path parallel to I-25, just like we are. I don’t know if we are in front of it or behind it, but since we are headed the same direction I feel like the safest thing to do is keep driving. I figure if I’m moving toward it I’ll see it before it sees me and if I’m ahead of it, all the better. I’m pretty hunkered on the steering wheel and my eyes have been glued for awhile so before I notice that my rider is no longer in the truck, I ask him what he thinks our plan of action should be.

The sky grows so very suddenly dark. The air inside the truck seemed to be sucked out and replaced by a vacuum made of utter silence. Can’t even feel the tires on the road.

I’m propelled across the surface of the planet in a vehicular tin can, driving on auto-pilot, my mind and awareness lost as though contained in the machine-like body of an ant ambulating upon the surface of what turns out to be my own dear skull.

I cannot see your face as I have borne myself into the tunnel of your black pupil. Is it your left eye, your right eye, your only eye? I do not know. I do not wonder. I am falling as through a well. I’m digging it, but not with my hands, suppressing the impulse to touch this featureless interior. Someone is screaming, screaming delight. Maybe it’s laughter. Water ever so gently slapping the shore at high nucleotide, almost a murmur. What are those bells? The taste. The aroma. A coolness under the skin. Someone is reminding me to breathe.

Such a big, wide, black silence.

Is it dread or an unaccustomed joy that lurks, waiting to be released as from an underground silo? And Devils Tower looms in the distance like the thumb of a gigantic buried hitchhiker.

How did I get this far north?

I had to step out of the truck just to get grounded. The first thing I noticed was some gum wrappers tangled in the brush.

But I feel so much gratitude, for the earth under my feet… and for all that occurred.

At times I can almost remember. The love remains. But I completely forgot to go to Bonanza. 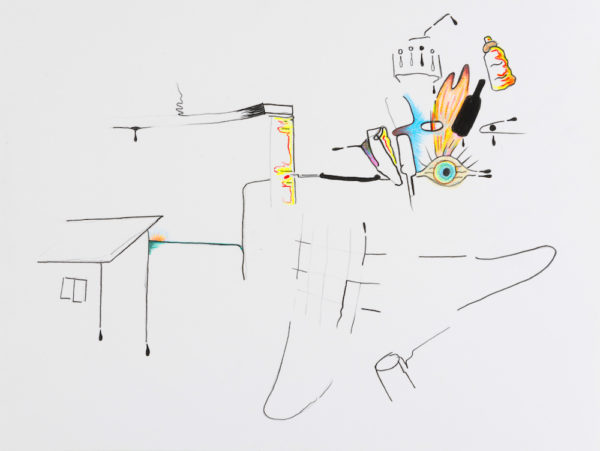