(Note: This is the fourth installment in a series of stories published in conjunction with the traveling project ‘Altered States’ which opened November 3rd, 2016 at FL!GHT Gallery in San Antonio. For Part One, go here. For Part Two, go here, and for Part Three, go here.)

There is simply no predicting what you might randomly hear on the road.

With Dunkin’ Donuts, Frank Stella and Happy, TX securely in the rear view I turned my vehicle north on U.S. 87, toward Bonanza, Colorado.

Highway 87 is probably the road I’ve driven and re-driven more than any other and for that reason it bears a comforting familiarity, even though some of its charm has disappeared, most notably the Home of The Ding Dong Daddies sign outside Dumas and the red macaw that used to always be in a certain window in downtown Clayton, New Mexico. These were touchstones that I visited every time I was through those places.

This little draw is another such place, a personal signpost since before I was driving, on U.S. 84 heading southeast out of Lubbock. Maybe you always look through it as you pass. It’s right outside Post. Please let me know if you recognize it: 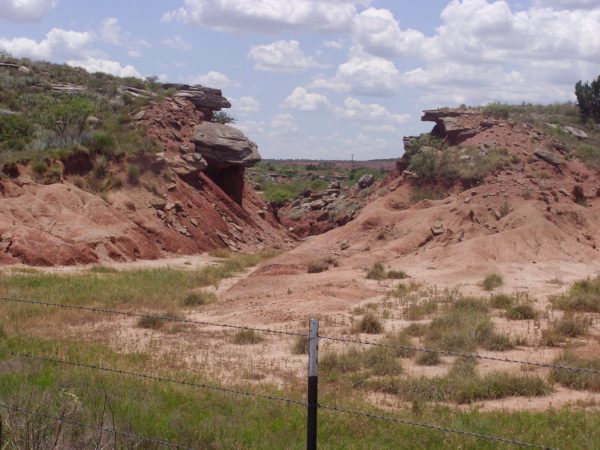 Anyway, with Dumas and Clayton now behind me, driving north toward the cutoff to Bonanza, I wasn’t expecting to find my own little David Sedaris moment at breakfast in Colorado City. It was early in the morning. Much too early for this thoughtful rumination on love and death:

“All I need is a cardboard box or a dump bag. And I want them to grind up my diamond and put it in there with me so that bitch will know who was first.”

Actually, in this year of extreme axiological confusion, I was not that surprised by this revelation, what with the Declaration of Independence being called out as spam and trash on the Fourth of July and the “president” claiming daily that bears don’t shit in the woods.

But here’s the thing: I’m not going to make it to Bonanza just yet.

It’s July 2017. I’ve just been in Lubbock for a week, the longest I’ve been there in decades. I was installing Part Two of the visual component of this project at the Louise Hopkins Underwood Center For The Arts. They put me up in an apartment they call The Ice House. After I’d been there a few days it dawned on me — the building was an ice factory where I was a core puller in 1971. This memory surprises and pleases me and occasions a few explanations of what a core puller does as the days unfold.

But so much of what I know of my hometown has vanished or been re-purposed, sometimes strangely. These missing and mangled spaces began to make me feel as though I was viewing the city through an invisible structure that was propping up the facade of the town, a ghost Lubbock acting as a scaffolding holding the present version in place.

This has partially revealed what my route through Altered States has been — cinematic, with a growing sense of unreality in retrospect, as if the whole time I’d been after-hours on a film set, but only realizing later that the abstract truth of “driving through America” had fundamentally shifted in the 14 months since I was on the road gathering photographic material for the project.

And the drawings at times have qualities that suggest a movie storyboard. These, from Lost Springs, Wyoming, are images from three points of view looking at an outdoor cooking site in a vacant field. A peripheral element in the distance shot, the campfire rig, is to the right of the fence just under the green line horizon. A Dutch oven hangs by a handle and a cowboy coffee pot tips. 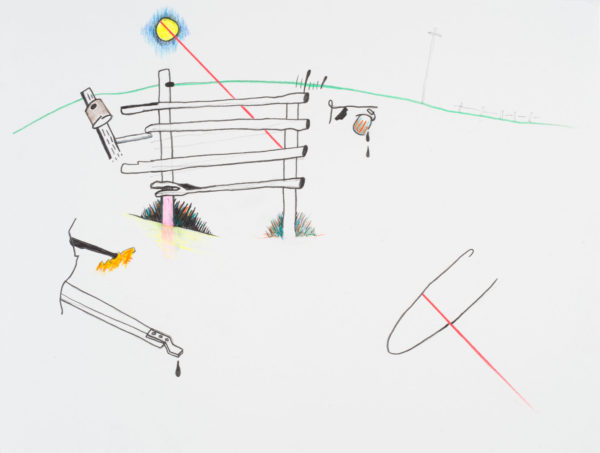 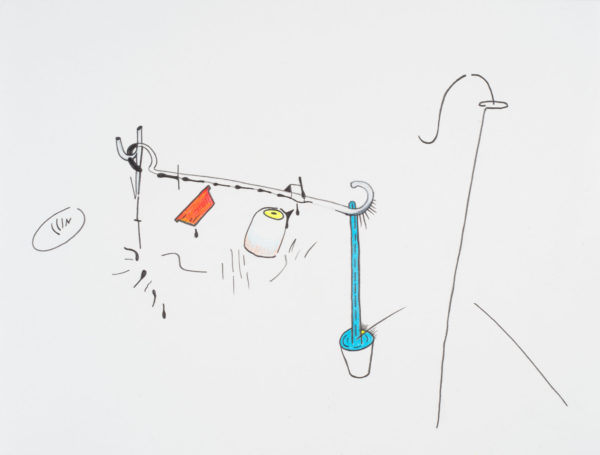 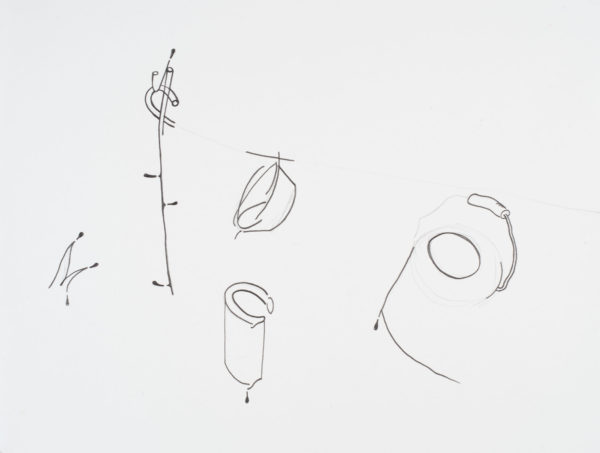 The close-in piece resembles the way I drew throughout the ’90s and 2000s, though those were even more restrained — single continuous lines in many cases. This minimal drawing style was a shift from the ways of the ’70s and ’80s, which were images built up with thousands of marks, color gradations, silver and gold foil, practically baroque compared to what came afterwards. Both inclinations are present in Altered States in small, scattered doses. 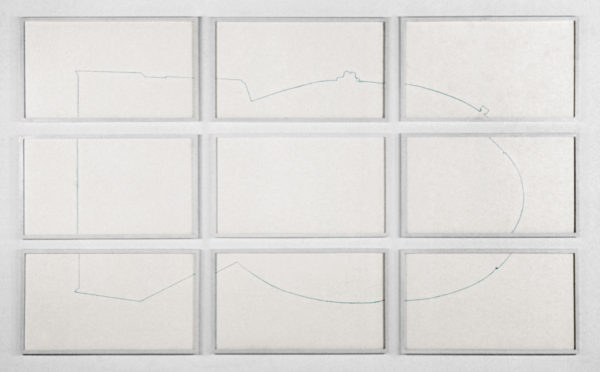 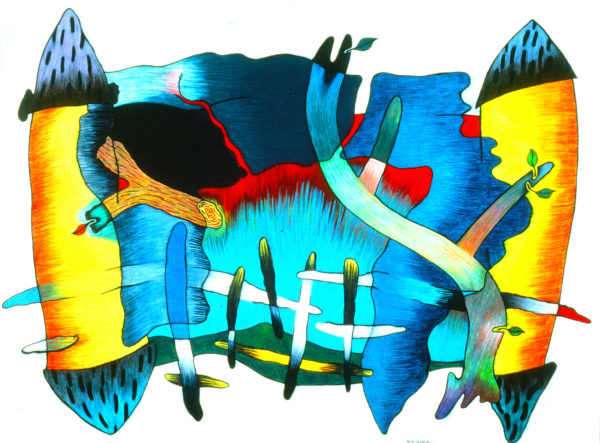 Meanwhile, I’m supposed to be in Southern Colorado, over a year ago, making my way to Bonanza. But that will have to wait — this return to Lubbock in the present has me in a Panhandle frame of mind. 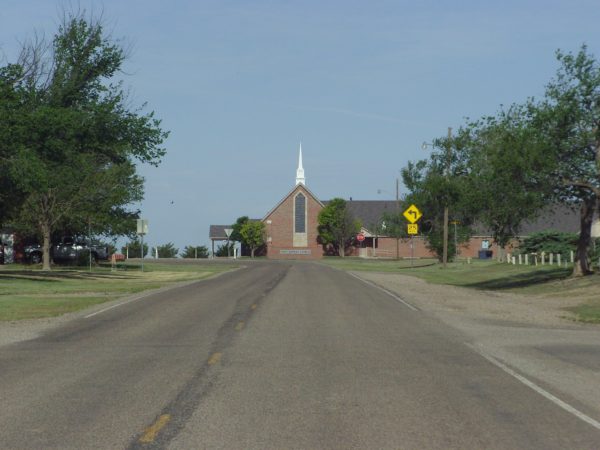 1. You might notice that Jesus is everywhere in West Texas. The Dusty Sandals Jesus. But there is the other Jesus. He will come like a thief in the night, most likely because he has second comings all day long, in different people. Or maybe in the same person more than once. The Bizarro Sandman, he gets around, whispering “wake up.”

2. I may have been entertaining angels when a kind gentleman at a taco house in Lubbock suggested places I should add to my list of destinations. I marveled at the sheer multitude of specificity that humanity gets up to: Nowh, Erehap, Pylo, St. Sprin, Gskey, Sto, Nerecluse, Oppor, Tun, Itydia, Mond Villee, Urekabu, Mmervil, Lenoth, Ingtru, Thorcon, Sequen, Ceseldor, Ado. Some of them sound Old Testament, others sci-fi, others you just wonder — why couldn’t the good people of Ingtru have named it Ring True?

3. My dad used to tell a joke about a Shakespearean scholar who found himself on a ranch and upon seeing some cowboys ready for roundup remarked, “What manner of men are these who wrap their legs in parentheses.”

Maybe this is an appropriate time to underline the incidental nature of this undertaking. Each event/action contains another: [ { ( ) } ]. Within this, the drawing has been less random than the traveling, but through and through it’s been no more of a plan than was needed at any given moment. As time has passed, the view of these travels sometimes seems to have hardened somehow, as if the present state of chaos in the nation was leaking into the past and slowly drying there.

Something in the photographs I look at for a short while as I start drawing becomes a framework of motion and space within which to begin. Just a few lines of suggestion are taken to the paper. An object or a color may be derived from the photo too. It is built up one line at a time, following the same procedure that is used to attach wooden scaffolding to the side of a building. Eventually something new emerges and the framework morphs. No longer a support, it is bent to the will of the emerging space. Black tears and red streaks that pierce appear. Someone asks if my pen was dripping. I said no, the drawing is. Y-shaped configurations suggesting stick figures, molecular drawings, or antennae come into play here and there. 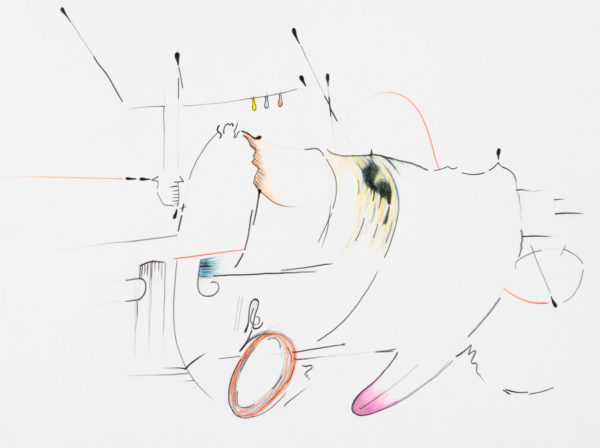 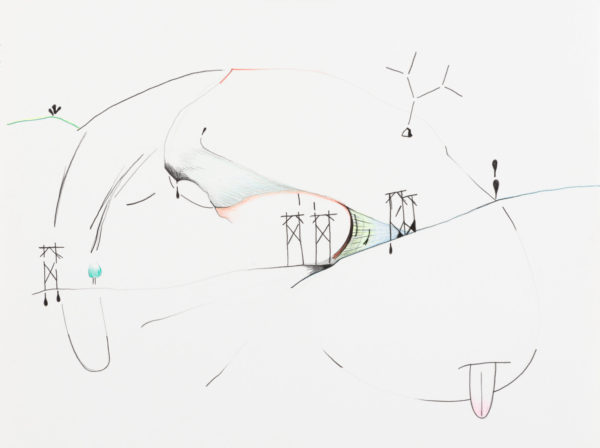 Anyway, maybe I’ll make it to Bonanza next episode. Meanwhile, Brackettville hasn’t been on my route lately (but that won’t stop me from going there now). 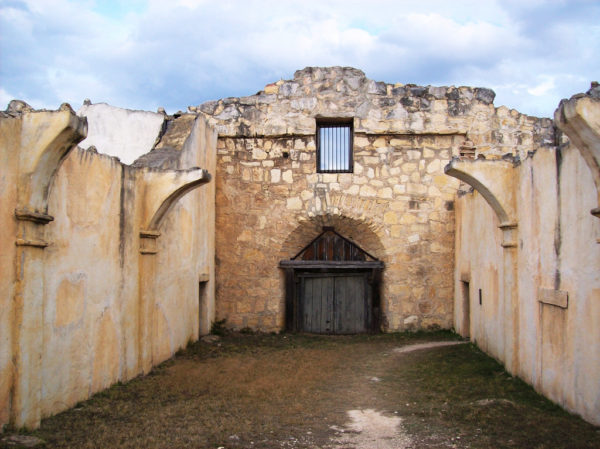