This piece has been long in the making and is an ongoing attempt to articulate some things that I feel still elude me. Thank you for reading. No matter what state you live in, let November be a referendum on extremist policies and politicians. As in, you know who I’m referring to, let’s end ‘em.

I acquired a confederate flag on April 23, 2020. I’ve been using bleach, deColourant, Rit color remover, white dye powder, sweat, sunlight, and concern, in an attempt to tease out the supreme white that lies beneath the deceptive red, white and blue of this artifact from another time — but so far, it’s been a lost cause. However, the flag did turn orange during the first bleach bath. An aposematic coloration reveal you might say.

A faded confederate flag in a bath.

Aposematic coloration occurs in animals to repel predators. In the case of the former president, it repels accountability. Hence, the hair, some kind of Samson thing. 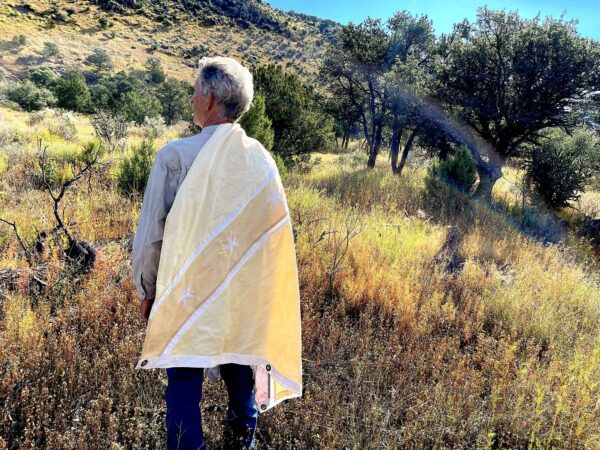 There was a period in the spring of 2003, when out-flagging was a thing. I began to notice it one day on I-10 in San Antonio, when a vehicle with a United We Stand bumper sticker and two American flags flying off its fenders cut me off at about 60 MPH.

Prior to that time, I can’t really say I thought about flags much. Since then, I’ve worked a few flag-related projects, including an American flag of stripes only, pieced together from three flags, and a piece in which flag-line-following rectangles are cut into the gallery wall, allowing the dust from the cuts to fall to the floor beneath, obscuring newspapers from the countries that are correspondent to the flags. 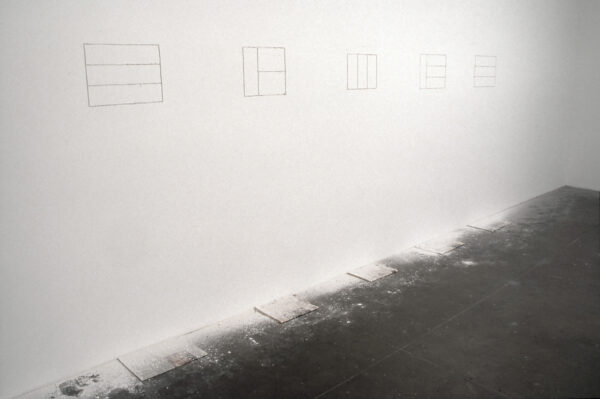 Maybe this flag mania is symptomatic of some kind of need; or maybe it is something similar to the mid-nineteenth century proliferation of stove pipe hats, which came about as fashion mimicking industry. Or maybe it’s a form of rallying around a country that seems more and more like a wounded animal. And wounded animals create concern.

BTW, I’m not concerned if someone does or doesn’t fly a flag. That is their right, their business, and is of no consequence to me either way.

Samuel Johnson’s pre-1776 comment that “patriotism is the last refuge of a scoundrel” has long lingered in my mind as a question. It has always seemed there was more wisdom in his comment than can be contained in the simple explanation that it was an indictment of false patriotism, mere display.

Though taken out of context, Becker and Fagan provide a handy line — “If he’s holding it high, he’s telling a lie.” That song, Only A Fool Would Say That, was written as a man-on-the-street response to John Lennon’s Imagine.

Dylan offers this: “They say that patriotism is the last refuge to which a scoundrel clings, steal a little and they throw you in jail, steal a lot and they make you king.”

Now we are in an era in which the American flag, a symbol embraced genuinely and disingenuously, suffers all kinds of abuse; abuse that waves all the way from alternately hued appropriations by sub groups of the population, to those who will subject it to complete degradation by emblazoning it with the image of a disgraced and truth-disabled former president; or the White Jesus — or both, with a little Rambo thrown in for bicep appeal.

People used to get arrested for this sort of thing. Abbie Hoffmann comes immediately to mind. His quote that day in 1968: “I regret that I have but one shirt to give for my country.”

Words of their time, for sure, but if you can’t find that funny, please borrow my screwdriver and loosen a few.

But what is patriotism? Maybe if you just say “loyalty” instead, something may get clarified. Given that, patriotism becomes “loyalty to country.” But what is country? It’s not the land. The land is from the time before us. Country hovers above the land, may even bear an absurd relationship to it.

It’s August during a particularly prolific monsoon here in New Mexico. Wild flowers are a blooming frenzy. I walk with my dog Jackson Bailey every day on the public land near my house — this is when I feel love of country, but if I’m honest, I would be just as likely to feel this in the Swiss Alps or the Amazonian jungle (maybe even on the rocky coast of Greenland). There is nothing “national” in the flavor of my feelings. Gratitude crosses all borders.

One might argue that my walks fall within what Merle Haggard deemed “milk and honey” in his song The Fightin’ Side of Me, a Viet Nam-era single.

They love our milk and honey
But they preach about some other way of livin’
When they’re runnin’ down my country, hoss
They’re walkin’ on the fightin’ side of me

But since then, his views have expanded somewhat, something that happens to a person when they stick to what they think and feel and observe instead of clinging to some ideology. You could see this process in his songs, appearances, and interviews for the past two or three decades. In 2016 he commented on Trump: “I think he’s dealing from a strange deck.”

Country may be the same thing as national character or imagination, the aspiration or idealization, or the hard look at what we are, viewed truthfully. One thing we are is out of balance with the land. Country can exist in fantasy, but the land buffers that with gravity, the agent that serves up a reminder when you fall down.

There have always been pharisaic elements in in the American character and Johnson rightly used the word “scoundrel” to delineate this profile, but by looking more closely at the word “refuge,” something different emerges. A refuge is a place walled-in from the world — that is why would-be scoundrels gather there, in a shrunken community, unable to recognize and dismissive of those outside their circle. A diverse population can be scary for those who never venture beyond static social parameters. Fear is a contraction.

McCarthyism, The John Birch Society, America Love It or Leave It, MAGA, Christian Nationalism, to name a few iterations (not even going to bother listing any of the bro-militias standing by) — whatever name you put to it, certain members of Congress and their cohorts wish to provide an ever-narrowing space in which the patriot fantasist finds alignment, comfort, and community for an ideology which declares that God, destiny, and convenience are on its side; all while appropriating American revolution tropes and tricornes to cover what is really driving it.

If patriotism is a concept to be taken seriously, it can’t include supporting a leader who continually lies and blithely incites violence when opportunity serves him. It can’t include not seeing right through the countless ill-begotten characters running for and holding office while engaging in shameless and obvious sycophantry. It can’t include participating in maneuvers to thwart the legitimate outcome of elections.

Whatever else it may be, patriotism is not loyalty to a cult.

And once again, Song is a source of light (paraphrasing John Prine): we love America, we just don’t know how to get there anymore.

Here is a quote from The Poetry Foundation’s William Carlos Williams page:

“So, in In the American Grain, William Carlos Williams tried ‘to find out for myself what the land of my more or less accidental birth might signify’ by examining the ‘original records’ of ‘some of the American founders. In its treatment of the makers of American history, ranging from Columbus to Lincoln, In the American Grain has impressed many as Williams’ most succinct definition of America and its people. D.H. Lawrence, for example, learned from Williams that ‘there are two ways of being American, and the chief … is by recoiling into individual smallness and insentience, and gutting the great continent in frenzies of mean fear. It is the Puritan way. The other is by touch; touch America as she is; dare to touch her! And this is the heroic way.’”

A worthy dare, not necessarily requiring heroism, at least not the self-announcing kind, and one that must reach further than the “American founders,” (emphasis on found).

Recall that on July 3rd, 2020, a disgusting display of scoundrel-ism took place at Mt. Rushmore, where the President of The United States had the bad taste and smirking devilry to include Garryowen in the musical program of his Independence Day rally; a program that also incongruously included Neil Young’s Cowgirl in The Sand — maybe Trump misheard the lyrics as “this place is at your command.”

Garryowen is the tune that the 7th Cavalry used as their marching-into-battle song.

I became aware of it in the mid-eighties when I lived in Montana, where Custer suffered his final defeat at Little Big Horn. So, when I heard what the indigenous women’s vocal group, Ulali did with the tune in their song All My Relations, recognition gave me that shiver-neck feeling that comes when you know you are hearing something that is deeply connected to the core.

I first heard the song at the Bijou Theater in San Antonio in the late nineties, when I saw the film Smoke Signals, a road movie about a couple of Coeur D’Alene teenage boys coming to terms with their complex and tragic family history. Half a minute of the song is heard in the film, when a couple of men steal the boys’ seats on a bus. The song serves as an answer to the seat-swipers, but the full power of it comes toward you when you listen to it start to finish, taking in what is being spoken and what is being sung. 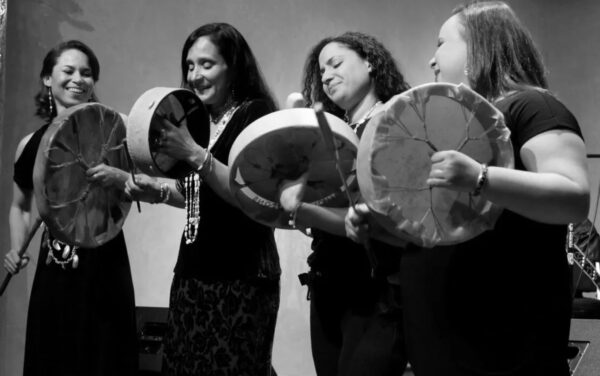 —even our own
To those who fall for the lies and join the dividing lines that keep us fighting amongst each other
To the outsiders who step in
—good or bad
And those of us who don’t know better
To the leaders and prisoners of war, politics, crime, race and religion
—innocent or guilty
To the young
The old
The living
And the dead
To our brothers and sisters in all living things across Mother Earth and her beauty we’ve destroyed and denied the honor that the Creator has given each individual:
The truth that lies in our hearts
All my relations

Like this piece a lot, Hills. Keep ’em coming.

Thank you Rainey & David.
Every election denier lying about the 2020 election who sought to become the top election official in a critical battleground state lost at the polls this year, as voters roundly rejected extreme partisans who promised to restrict voting and overhaul the electoral process. Their losses halted a plan by Trump and his allies to take over the election apparatus in critical states before the 2024 presidential election. Only Diego Morales, a Republican in deep-red Indiana, was successful, while candidates in Michigan, Arizona and New Mexico were defeated.