For Part One in this series, please go here. Part Two is here.

This week, Ethel Shipton finds that spilled paint is just another way to get there and recalls the beginnings of friendship with Tracey Snelling, who writes about her summer 2003 experience at Sala Diaz.

Tracey was selected for a show by guest curator Michael Klein, one of two dozen such guests over the history of the space, beginning with the first, Tracey Moffat, 1997, during the first period of the gallery when founder Alejandro Diaz was Director/Curator. The two met in the early days of Artpace, when both were resident artists. Artpace quickly became a pivotal force when it opened in January 1995, and was an important factor for Alejandro in deciding to start Sala Diaz later that same year.

Hills called one day and said we are going to paint Sala Diaz — the exterior needs painting — are you in?  I said sure, when? Saturday! What time? In the morning. OK. So I showed up at Sala Diaz and asked when’s everyone else showing up? Hills: it’s just you and me. My response was OK, and my thought was really…  we’ll never get this done. But I got to work. We were each on a ladder painting the façade of the gallery. It was close to the end of day, and I was on the front steps with a paint tray in one hand and a paint brush in the other stretching to reach the top of the door frame. The painting tray fell toward me, so I looked down to see that it appeared I had wet my pants with white paint. There’s a photo somewhere of this. Hills and I laughed for about 15 minutes while I waited for the paint to dry enough to be able to drive home. The things you do for love. 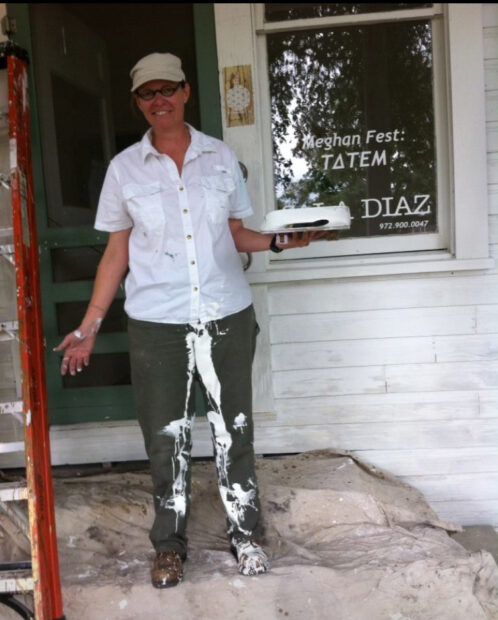 In 2003, when Tracey had her show, I wouldn’t have been able to describe her work in this way. I remember its placement in the gallery and a quick hello to the artist — then I was off to the next opening in a busy night of openings in San Antonio.

In 2017, I was awarded a three-month residency in Berlin through Blue Star Contemporary/Kunstlerhaus Bethanien, an international program with residents from all over the globe. I got there in July 2017 and was informed that there was one other artist from the US, just down and across the hall from mine.

Well, it took me a few days to get settled and then finally when I knocked on the door, the person answered and asked where I was from? Something like this:

What was the work?

I make these models of buildings.

We went out for a beer and discovered that neither of us remembered meeting one another 14 years before, but for three months in 2017, I found a buddy to hang with, and a lifelong friend in Tracey Snelling.

Sala Diaz continues to be a connector of people, art, and time. It’s always expanding communities of artists and viewers, and continues to give to all who choose to play.

I was invited to do the show by guest curator Michael Klein, who introduced me to Hills Snyder and Sala Diaz. Sometimes things work out and you find a special surprise in the middle of everyday life. That’s Sala Diaz.

My boyfriend at the time, Steve, and I decide to take a road trip to San Antonio from Oakland. I love road trips but hate driving at night. Being a passenger is better. Several things stand out from the trip. On the way, we stop in El Paso. I love the old downtown buildings and dusty town, what little of it we see. Back on the road, not too far along, we stop again. Right off the highway, the remnants of a small Texas town sit, seemingly abandoned.

Straight out of a movie.

I expect a tumbleweed to blow by any minute.

I photograph this with my Hasselblad, making several beautiful, lonely images that later became the basis for a sculpture. Again, on the highway. It seems we drive for hours across endless expanses of low-lying shrubland. Pulling into a gas station, pickup trucks with gun racks and local boys set me on edge.

We make it to San Antonio and Sala Diaz. The air is heavy, fragrant, and filled with the sound of various bugs buzzing. The gallery is on one side of a duplex in an old wooden, white-paint-peeling house. Not your average gallery… . We meet Hills, who’s a very kind, easy-going, tall man with long hair that makes him seem even longer, and a cool southern accent. Though well-worn, the space is charming and the old window casings framing the greenery and puffy clouds are more welcoming than most white cubes. We meet Chuck, who lives next door. He’s a nice guy and I immediately feel an affinity with his fantastic backlit-waterfall found artworks.

The opening ends up being one of the best I’ve had. There’s a metal tub full of beers on ice, an extra-large jar of dill pickles, and sandwiches donated from an Artpace show the night before. Many people, mostly artists, I gather, come and fill the gallery and backyard. It’s a welcoming group, and I’m impressed with how friendly and open the art scene feels here in San Antonio. The opening goes late into the night. My friend Salvador visits from Mexico, making it a perfect evening.

The experience later inspires me to build a small-scale Sala Diaz, with my miniaturized show inside, and all the fixings from the opening — the pickle jar, tub of beer, and colored lights strung from Sala Diaz to the tree.

Fifteen years later, while visiting friends in San Antonio who I met in Berlin, I visit Sala Diaz once again. The air is heavy and fragrant; the bugs buzz. Artists gather. It’s nice to be back. 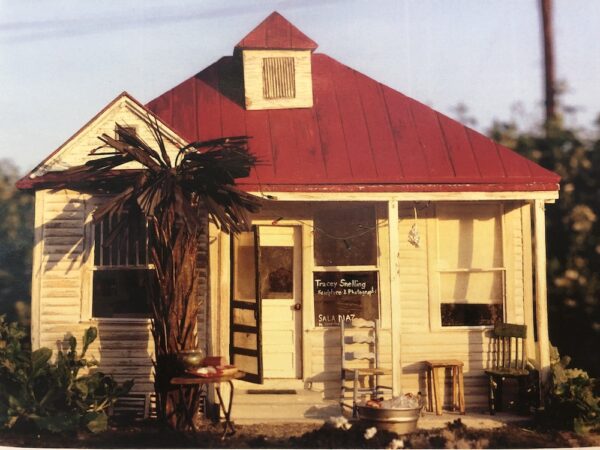 Another great set of memories! Thank you.