by Sarah Fisch May 3, 2011
FacebookTwitterEmail

I’ve seen the Sala Diaz effect encourage unprecedented audacity more than once. More than ten times. The secret is, to a large extent, the flip-flop of the usual S.A. gallery show, in which an artist hangs finished work in the course of one or two days, and that art hangs or stands in there for about a month. At Sala Diaz, artists inhabit the half-a-duplex for weeks instead of days (the artists-in-residence don’t live there, but they’re given 24-hour access), and the installation timeline is constructed, by design, to be far longer than the public access to the work (generally the exhibition part of a Sala Diaz show consists of an opening and a closing reception, and is otherwise open by appointment only).

Jung Hee Mun has made intelligent, endearingly insidious use of the Sala Diaz effect in her one-woman show, Proprium Cycle, which consists of wall works, performance, video, text, and homemade cotton balls.

I know that-all sounds very au-courant and kinda precious, but stick with me.

Jung Mun’s hung a series of figural paintings in the front room which are more technically accomplished than anything I’ve seen her do with paint or pencil. In a review for the San Antonio Current last Fall, I took the young artist to task for what I surmised was a rushed  process. 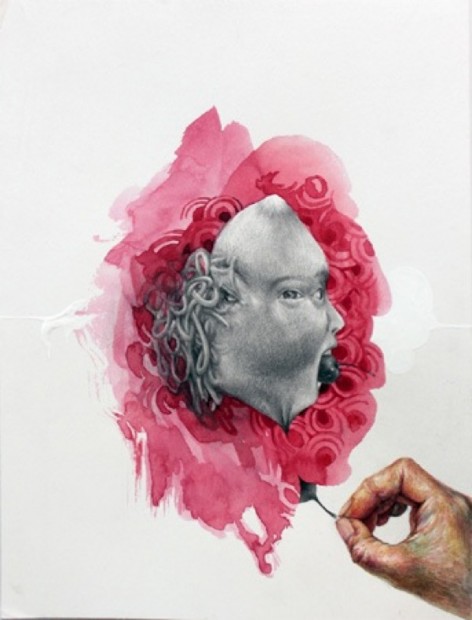 I think it’d be a good idea for Jung Mun to slow down, to show less, and to work on fewer pieces with greater discernment. She has a massive talent; her imagination is enormous, fertile, and idiosyncratic …  but the sketched anthropomorphic figures often don’t reward the viewer on close inspection: her cross-hatching is student-level (well, Jeez here’s the thing: she’s barely out of school), and her shading lacks depth … her pencil line has yet to become equal to the task of sufficiently relating her extraordinary ideas.

I don’t know whether it was the months-long timeframe she was given to conceive of this show, or whether this happened in advance of her Sala Diaz residency, but Jung Mun has expanded her vision outwards to include narratively interlocked works which don’t present a tidy theme, but which reflect on the adoration of process, as well as the perverse pursuit of perfection and the rejection of it, the context of womens’ handicraft, all while she sharpens her execution of 2-D images and materials, and endows them with greater power. 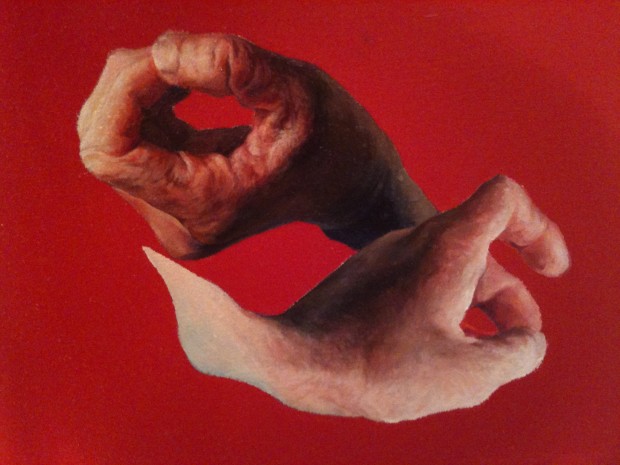 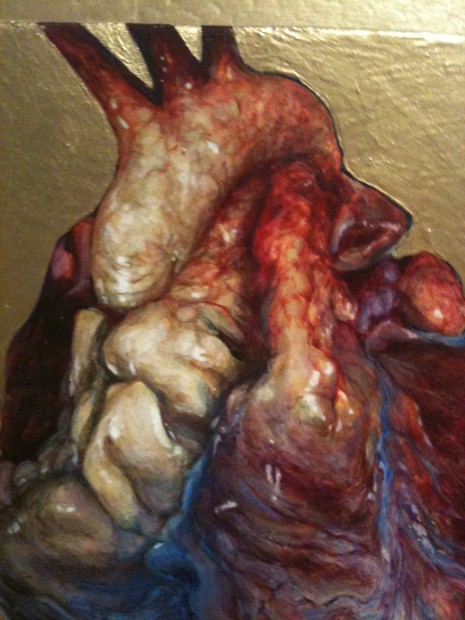 Open heart: detail of another painting in "Proprium Cycle."

(Please keep in mind that these are 72 dpi images, taken with an iPhone. In person, they have so much more detail and presence)

(proprium = “In Aristotelian thought, a predicable property common to all members of a kind but not constituting part of the definition of that kind.” )

“The body of work which evolved around the title “Proprium Cycle” solves my years-long questions of defining self in micro to macro levels. I use body parts as a symbol for a proprietor of life and manipulate myself as a model.
My work begins with exploring the self and progresses to macrocosmic understanding of the self which is, in sum, how one composes a life. When time is added to one’s experiences in the micro level, generalization and simplification happen, and it is a way of accepting the self.”

Body as a symbol for a proprietor of life? Ah, proprietor. The person who runs the shop. Jung Mun seems to have cast her gaze from dreamy baby contours to body as action — kinetic hands, cardiac viscera,  tissue that glistens. Out of the vaporous graphite suggestions of last year, comes direct intention. Out of surface sketching, incisive, credible, near-clinical detail and a sure-footed handle on paint application.

Opening night at Sala Diaz, Jung Mun allowed gallery-goers to spray water from a gold-painted plastic spray bottle onto the canvases in the front room. The acrylic paint didn’t run, but the drips, spots and splatters which temporarily darkened the deep red of the anatomical backgrounds felt fierce and perversely fun. Jung Mun never precisely explained this interactivity, which is refreshing. She let us get in there, is all.

Against the adjacent wall, she hung some smaller painting segments amidst mirrors, here’s an installation view (again, crappy photo): 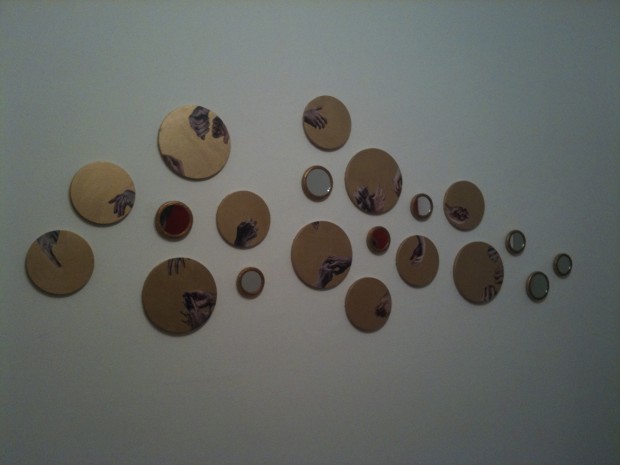 In this collection of objects you see hands, and you see your image. While maybe not entirely necessary, it’s nifty. What the hell do I do with my hands anymore?, I thought. I considered various hobbies, just to participate in the human pleasure of making one’s hands do something (other than to type). 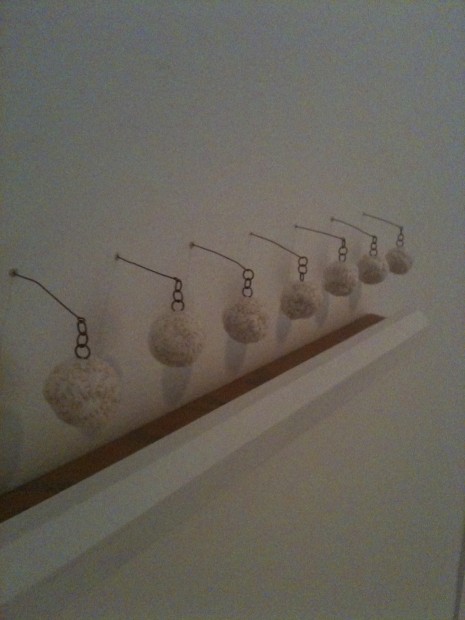 Made by hand, from roughest (nearest) to most finished (farthest)

with visible stitching and sectioning-off, and ordered like the evolution of man, from cruder, looser early cotton balls to tighter, more elegant creatures.

Alongside the balls, she’s set up a video of herself making them. As Mun scrunches, rolls, and hand-sews strips of cotton, she remarks in her gentle, now-slightly-Texanified voice (she’s originally from Seoul), as though to students. She acts out the idea of uncertain, evolving practice, while thoughtful axiom texts appear. To call this “Zen” is too-confining, if that’s possible, and doesn’t touch on her oddball (ha) particularity.

Here’s the video, which made we want to do this crazy project:

…Surely this film isn’t meant as instructive, exactly. But it feels intimate to  watch her struggle with the cotton and thread, to make mistakes and admit it. Her confidence is palpable, and her second-to-second decision-making is thoughtful.  It’s almost like HGTV for those who will probably never do what she’s doing, but who take pleasure in watching the efforts of a talented person. She says, during her work-monologue, “You’re never gonna make it flat, anyway” (she means the surface of the ball), but keeps at it.

A piece across from the video and cotton balls, which looked like this: 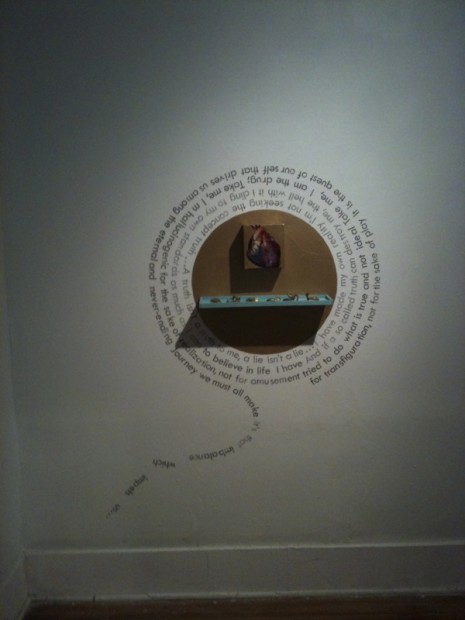 …it drew me in with that vivid heart, and the text has some rhythm and interest, but having to turn my eyes and head around and around made me dizzy. I did it, but I wasn’t nearly as curious and engaged as I was by the video.

Jung Mun made ambitious use of Sala Diaz, showing just what she’s made of – technically, intellectually, intuitively, and just what we’re made of  – our gaze, our status as a creature who makes and means and tries and accepts.

NOTE: The closing reception for Proprium Cycle is this Friday, the 6th, from 8-11 pm. Highly recommended to go look at her exhibition, and squirt water at it.

Jung’s work is good, but Fisch is just a bad writer. Period

Scathing. Any declarative statement which follows with the word “period” always makes its case, Q.E.D. From now on, I’m a veterinarian.

QeD is not a phrase, boob.

ignoring the absurd and juvenile prior comments, I just want to point out that good writing is writing that communicates effectively. This review did that and made me want to see this work. Wish I was in SA so I could. Thanks for the review.

When I saw the artist’s work last year, she seemed to be struggling to bridge the gap between absraction and realism, and was clinging to technique driven facial images that appeared to be drawn from photographs. I’m pleased to see that Ms. Mun’s work has taken a more conceptual route in the Sala Diaz exhibit, with some of the figurative images appearing more surreal. The artist has obviously matured through repeated trial-and-error experimentation.

As for the “bad writer” comment, this is a blog, not the “Art Journal”. It is refreshing to read art reviews that aren’t full of “art speak”. The writer tells it like it is, throwing in her sense of humor. The only complaint I would have if I were this artist is to please not post such low quality images of a show that she must have spent months creating. Invest in a proper digital camera, hire a photographer, or solicit the artist for high quality images from the exhibit. Taking pics of art with your phone is what the tourists do, not art reviewers.

You’re dead-on about the images, Jessica, and thanks. Need better camera, and/or to get images from artists and curators. Point well taken.