For Part One in this series, please go here. Part Two is here, and Part Three here.

Former Casa Chuck resident artist and current Interim Director of Sala Diaz, Heyd Fontenot, considers various artist ecologies, cinematic and actual, and fantasizes a domicile to contain it all. His scenario, beyond the polarities of utopia/dystopia, favors the real and tosses in the suggestion that by luck, grit, and good will, an all-inclusive society could emerge; or, failing this ideal, that maybe just finding somewhere to belong is enough. During his extended stay at Casa Chuck, Fontenot’s project, The Lodge of Saint Reborlaro, was set to host San Antonio artist Katie Pell. Her eye-bathing project was sadly cut short by terminal illness. If you knew her, you miss her.

When I think about winning the lottery, I think about buying big houses. Not extravagant, reality-TV houses, but accommodating houses. Houses big enough for my friends to come live (and work) with me in Portugal and Paris and British Columbia and Santiago… and we will all make art and have healthy meals together… and campfires! And we might do drugs, *wink*. And everyone will love everyone else who is at these houses. Everyone will clean up after themselves. Everyone will respect everyone else’s privacy and time and studio practice. There will never be a time when anyone has to wait for a bathroom. And no one will start bringing over some terrible, idiot boyfriend. It’s perfect and safe and we will all be productive and helpful — with good boundaries. I regularly indulge in these utopian fantasies, but perfect and perpetual harmony isn’t realistic. No scene or family is without its conflicts. It’s a guarantee that conflicts WILL arise. But how these conflicts are negotiated makes all the difference.

There’s a documentary film called Trinidad from 2009. As I remember, it tells the stories of people who have made pilgrimages to the small town of Trinidad, Colorado to purse gender affirmation surgeries. It seems that this town had gained a reputation among the transgender community as a place that felt somewhat safe and had medical resources that suited their specific needs. Many of the people in the film choose to remain in Trinidad once their surgeries are complete. In the months leading up to surgery and in the months of recovery, they recognize the strong community in Trinidad. There is value to being among people who share or at least understand a trans identity in the earliest years of the 21st century. One of the more compelling scenes in the film for me is when the trans subjects of the documentary begin shit-talking each other. It’s not exceptional for this often-victimized minority to endure bigoted judgements — navigating abuse is just part of the landscape. The revelation was that the audience witnesses these documentary subjects at such ease in Trinidad that they can entertain rivalries and petty grievances and develop cliques. It had the unexpected effect of feeling almost like graduation… like a liberation. This moment wasn’t a fabricated public relations photo op about “unity.” They were finally able to retire the façade of “everything is fine” because it felt safe enough to just be real.

Katie Pell died three months after I arrived in San Antonio. She was wrestling with cancer and her prognosis seemed to change with the wind — devastating — hopeful — back to devastating. When she felt good, you can bet that she was deeply engaged in a locked-gaze, no-bullshit conversation. She loved a party, and she went to every party that she could get to. Her personality and power are too great to sum up here, so I’ll just tell you one story that she told me. Chuck Ramirez, the much beloved, legendary, and deified San Antonio artist who served as the Sala Diaz Compound Grande Host, once told Katie when she first arrived on the scene at Sala Diaz that she “didn’t belong there… in this group of friends… at this party — she really “wasn’t welcome.” By many accounts, Chuck was wonderful, but he could be a mean drunk and had a running disclaimer of “if you see me with a vodka in hand after 1am, you’d better run.” 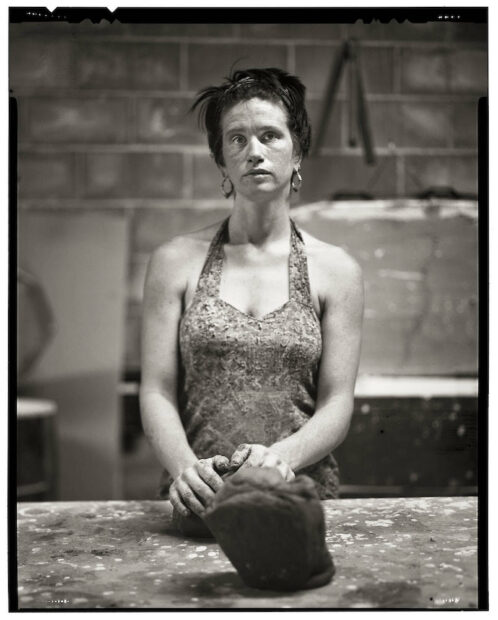 Katie DID belong there, and she knew it. While it momentarily knocked her off balance to hear such a statement, Chuck’s proclamation didn’t deter Katie from sticking around and contributing a massive amount of time, energy, and love to Sala Diaz and to Chuck Ramirez himself. Like all histories, who’s to say what really happened or who said what? When you add to the equation: two LARGE, DRAMATIC PERSONALITIES, circumstantial chemical substances and delicate mental states, these social interactions have the possibilities of a Rubik’s cube. Why am I talking about two achingly absent people who shared an uncomfortable moment of who-belongs-where? Because every damn day in San Antonio, Texas, Katie Pell and Chuck Ramirez are mentioned and fondly remembered. They are both essential to Sala Diaz’s story — Katie and Chuck were only two of maybe hundreds of people who belong here at Sala Diaz. To belong somewhere is remarkable. 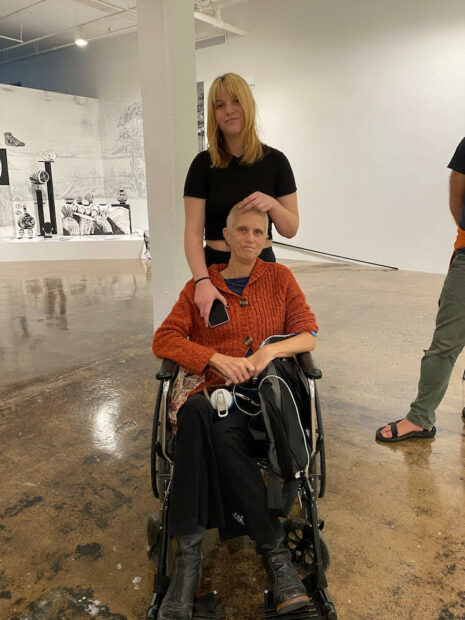 In intimate relationships, often the person we are closest to is the person to whom we “show our demons.” Christianity, with its strict binary of good OR evil, has distorted expectations that only bad people have negative impulses. Like Dante’s Inferno with its circles of hell, likewise in friendships and romances there are… complex levels and layers of seeing and knowing someone. Of course, we are all a lumbering mix of good and evil, hopefully doing our best to be kind, generous, helpful, and not adding to anyone’s pain.

My personal history with Sala Diaz is extremely brief compared to its on-going twenty-six-year existence. But it is a history, nonetheless. I’ve had the great fortune to experience several communities as a visiting artist-in-residence. Some situations had me in the wilderness scraping for basic comforts, and some had me on a circuit of glitzy galas. It’s been both enriching and daunting to enter a new community. Even the more challenging situations were at least educational. Traveling about as a visiting artist has given me in-person perspectives on a variety of creative eco-systems. Whatever mystical or practical elements allow for an artists’ community to form, thrive AND survive, San Antonio’s Southtown has it. It’s not effortless (in fact, quite a lot of effort has gone into it — just ask Ethel Shipton (speaking of saints). But enough about saints. Maybe we can do away with the notion of saints and utopias all together. Because that gets in the way of seeing things for what they are. Why are we even expecting people and situations to be perfect? Instead, maybe we do the kindest thing for ourselves and just embrace the complications of living side-by-side our inherently flawed, potentially magical, and deeply human peers. 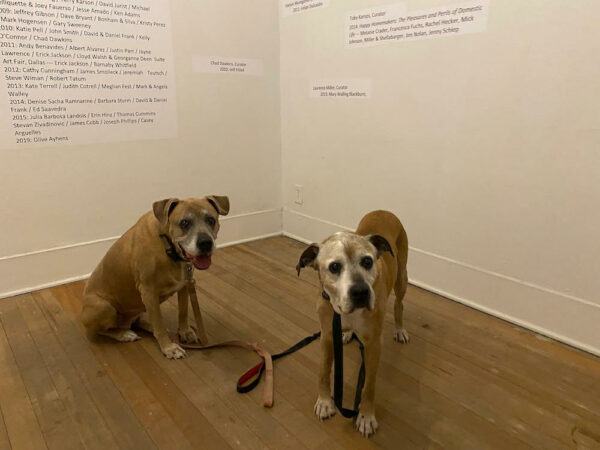 Katie Pell’s pups Jumba and Buddy get a preview of the archive show at Sala Diaz.

Missing Katie, yet she is Here All Over The Place. <3

That was a great read, Heyd and Hills, she was certainly a no BS go-getter with talent but also so approachable if you were genuine.

My Aunt! Katie was the best human being I’ve ever known. Love and miss her beyond words. What a blessing to have been connected to her in such a close way. I miss her laugh and smile. She was my favorite person.

Thank you for this.