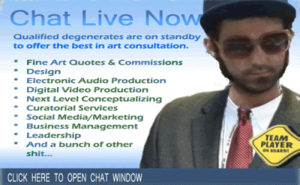 Waco artist Joe Magnano was arrested by the Texas Department of Public Safety yesterday on charges of criminal mischief in connection with the recent Tom’s Marfa/Prada Marfa vandalism incident near Valentine, TX. Magnano, a graduate of the San Francisco Art Institute has been revealed as “9271977,” the author of the most recent unauthorized alterations to oft-targeted popular landmark. In a January article in the Waco Tribune, Alicia Hart, owner of Harts N Crafts, a shop in Waco where Mr. Magnano lives and helps out, said of Magnano, “He has an eye to reorient things.”

Magnano is expected to be released on bail this afternoon. 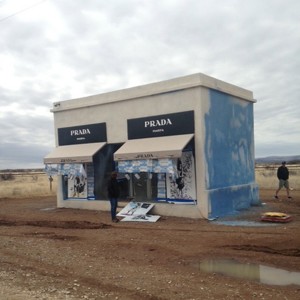 So what is your opinion on Magnano’s alleged actions?

As I see it, an action can be art AND vandalism, they’re not mutually exclusive. It’s just that some art forms have legal consequences.

The question for me is whether the piece was worth the destruction of property and possible criminal prosecution. Not having seen it, it’s hard to judge it as art. I’d guess no, in this case. From the pictures and the artist’s website it looks like too much work for a too little effect. I think the stray bullet-holes through the window in 2005 were more succinct.

Artist should find a new medium! I don’t want nobody drawing on my page…how rude!

No one has the right to alter anyone’s art. I don’t care if you are a self-proclaimed super artist.

Initially, I judged this act as destruction by punks. That been revised to the singular.

if he really is an artist I would like to see more effort in the next attempt. it appears that he didn’t really try that hard at all.

Art in museums, galleries, or other installations sometimes have security guards to protect the pieces. It is widely known that one should not touch art, much less vandelize it.

“When Elmgreen & Dragset erected Prada Marfa in 2005, they, along with the producers Art Production Fund and Ballroom Marfa, proposed that the public art project would exist at the mercy of the elements and visitors. As Art Production Fund’s Yvonne Force Villareal told the New York Times before its opening, “We loved the idea of the piece being born on Oct. 1 and that it will never again be maintained. If someone spray-paints graffiti or a cowboy decides to use it as target practice or maybe a mouse or a muskrat makes a home in it, 50 years from now it will be a ruin that is a reflection of the time it was made.””