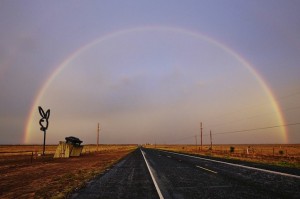 Playboy Marfa, which was quickly installed this summer just outside of Marfa and almost as quickly received removal orders from Texas Department of Transportation (TxDot), will be moving down the road to the Dallas Contemporary. The controversial sculpture is set a part of a Richard Phillips exhibition opening at the museum in April.

D Magazine’s Peter Simek relayed his initial reaction to the Dallas relocation: “When I first heard the news my knee jerk reaction was to see this as merely an opportunistic swipe at a sensational bit of art controversy.” He eventually came to the conclusion, though, “that the Dallas Contemporary is a better location for the Playboy sculpture than the pristine and sublime West Texas desert.”

One of Simek’s gripes about Playboy Marfa was that “its brazen tastelessness has put a superior work of art, Prada Marfa, in jeopardy.” The fate of Prada Marfa, which has stood out on the West Texas highway since 2005, is still unresolved, according to the Huffington Post. “All I can tell you about Prada is we are working on a solution,” said TxDot spokeswoman Veronica Beyer, “but cannot get into specifics yet.”