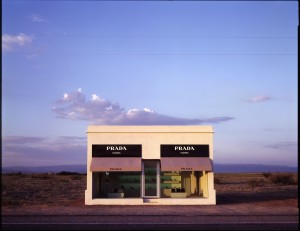 After last week’s media blitz about the most recent defacing/art-application (up to you!) to Prada Marfa by an artist/vandal (also, up to you!) called 9271977, Ballroom Marfa, the art organization tasked with looking after the remote fake storefront, has updated the “Prada Marfa Explainer,” Ballroom Marfa’s place for answering some of the tangled conceptual FAQs about the artwork and its site. The updates are in response to the sweeping criticisms that Prada Marfa is, by nature, an entropic art object, made to deteriorate and suffer abuse, both environmental and artistic/vandalistic. As one Glasstire reader, citing Wikipedia, pointed out last week in this space: “The act of protecting and repairing this art work is vandalism. Prada Marfa ‘was intended to never be repaired, so it might slowly degrade back into the natural landscape.’ People are natural things and vandalism is a byproduct of nature, so repairing a work that is supposed to be degraded by nature is vandalism.”

Glasstire’s anonymous comment, albeit twisted with a funny logic, was not singular, as the “Prada Marfa Explainer” implies with this new FAQ, underscoring, perhaps, the sometimes entropic nature of conceptual intentions, as well:

Why is there any maintenance of Prada Marfa? Isn’t it supposed to become a ruin?

When Elmgreen & Dragset erected Prada Marfa in 2005, they, along with the producers Art Production Fund and Ballroom Marfa, proposed that the public art project would exist at the mercy of the elements and visitors. As Art Production Fund’s Yvonne Force Villareal told the New York Times before its opening, “We loved the idea of the piece being born on Oct. 1 and that it will never again be maintained. If someone spray-paints graffiti or a cowboy decides to use it as target practice or maybe a mouse or a muskrat makes a home in it, 50 years from now it will be a ruin that is a reflection of the time it was made.”

The reality of leaving Prada Marfa completely untouched is a complicated and multifaceted issue. The site is far from pristine, as visitors will already know; however, all parties realized that if the structure were allowed to fully decay, it would become both a hazard and an eyesore. With the blessing of Elmgreen & Dragset, the work’s original plan was modified shortly after it was constructed in 2005. Since it is a public installation, Art Production Fund and Ballroom Marfa are required by law to perform a certain level of repairs in the interest of safety. And out of respect to the residents of Valentine, we paint over graffiti and clean up trash at the site as needed. Performing this minimal maintenance remains true to the spirit of Elmgreen & Dragset’s original proposal, and it also allows us to keep the installation accessible to the public.

Apparently, you can’t fake dereliction. I imagine that Elmgreen and Dragset’s original vision was inspired by the hundreds of picturesque abandoned gas stations and other failed roadside busineses that abound along rural West Texas highways (think Route 66!), but the recent vandalism/repair situation highlights the fact that Prada Marfa isn’t really abandoned. Ballroom Marfa is still a going concern, and can maintain Prada Marfa, so they must, for the reasons they cite.

Never fear! Someday, when Ballroom Marfa is a memory, and Prada Marfa is a real abandoned project, not just the image of one, the muskrats and vandals will get their turn.

Prada Marfa’s relevance faded a long time ago. It was never purely surreal or effectively conceptual, given the proximity of contemporary art and boutique businesses in Marfa. It’s kinda just a box for people to check off their Facebook bucket-lists.

Wing wall back in Dallas we’re trying to convince the powers that be that certain public art installations need to be maintained. Interesting.

Assuming that it ever becomes an abandoned project, my only guess upon further contemplation, would be that some Art enthusiasts or institution would strive to salvage Marfa-Prada and store it in another Museum box, as if it were some Russian egg doll. Meantime those reasons cited await further dialog &/or debate. New reasons & updates are hard not to follow …