When it’s a battle between Art and the State, it can get ugly. Max Ernst vs. the Gestapo. Robert Mapplethorpe vs. Senator Jesse Helms. Ai Weiwei vs. the Chinese government.

Then there’s the chilling power of the Texas Department of Transportation.

Wait, what? You mean TxDOT, the state agency with the cute nickname that plants bluebonnets along the road? Yes, and last summer, wielding the chilling power of the Highway Beautification Act, they nearly shuttered a beloved West Texas art installation: Prada Marfa. 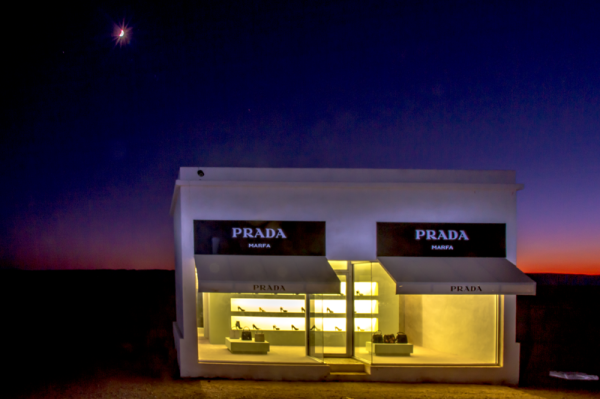 At that time, in July 2013, TxDOT had just declared Playboy Marfa an “illegal outdoor advertising sign” according to the 1965 federal act. The previous month, Playboy Marfa had appeared, literally overnight, along Highway 90, just outside of the desert art mecca of Marfa. It was a Richard Phillips creation, with the trademark Playboy logo of the bunny in a bowtie, towering 40 feet above a Dodge Charger on a concrete platform.

It was commissioned by Playboy Enterprises; it featured a corporate logo; and it sure looked like advertising. It turns out they didn’t have the proper highway permit for the bunny-on-a-stick-on-a-box.

With Playboy Marfa under investigation, the TxDOT bureaucrats then adjusted their orange safety vests and drove—slowly and with caution—west along Highway 90 to Prada Marfa.

Was Prada Marfa art or advertising? Most saw it as the whimsical satire of European artists Elmgreen & Dragset. It was installed in 2005 by Ballroom Marfa and the Art Production Fund. But on its surface, it was a phony shoe store, brandishing the Prada brand to the millions (well, ok, thousands) of travelers who whiz past it into the dusty town of Valentine: population 217.

Well, this Friday (September 12), the verdict finally came down. TxDOT has now given up its more than yearlong crusade. It released a statement, saying “the complaint file will be closed.”

“Prada Marfa is officially saved,” crowed the website of Ballroom Marfa, which commissioned the piece almost a decade ago.

One of the key moves for Ballroom was that in February of this year, they began leasing the land on which the art exhibit is located. The building’s branding was subsequently considered to be an “on-premise” sign and therefore didn’t require a permit under the Highway Beautification Act.

“I was happy with that,” said artist Boyd Elder about TxDOT’s decision. He is the site curator of Prada Marfa and a resident of the town of Valentine. In recent years, he’s seen the site grow into a bona fide tourist destination, a must-stop for “selfies” along the road. Its urban façade set ironically against the empty desert landscape.

“Whenever I’ve had to do work over there,” he said, “it’s incredible the number of people who come up to me and want their photo taken.” On a 2012 trip, Beyoncé accelerated this trend, when her friends took a snapshot of her leaping into the air in front of Prada Marfa. In a yellow blouse and black skirt, she floats above the road, arms outstretched.

Prada Marfa now may be safe from bureaucrats, but it’s still the target of vandals. The two biggest attacks were in 2005 and earlier this year, in Spring 2014. In the first major attack, a few days after it opened, thieves broke into the storefront and made off with Prada shoes and handbags. Earlier this year, a resident of Waco, in a clumsy attempt at a political statement, grafittied the walls of the exhibit and slashed the cloth awnings. The legal case is still ongoing, and according to Elder, the site itself has not been full restored.

As for Playboy Marfa? It gave up the fight. It was dismantled barely six months after it was erected. On a cloudy November day, it was trucked east, to a new home at the Dallas Contemporary. Most Marfa residents were happy to see it go. To this day, a few “Ban the Bunny” bumper stickers still appear around town.

For some, it was too bad Playboy Marfa was ever lumped in with Prada Marfa in the first place. Playboy was the name-dropping party-crasher at the cool kids’ party, parachuting into town to take advantage of the Marfa name.

It was a stealth installation and there was no opening. Playboy’s PR flacks wouldn’t even talk about the sculpture for two weeks after it was installed. Playboy staff barely made their presence known. The publicity photos of Raquel Pomplun, Playmate of the Year, were taken in front of the sculpture in the wee hours of the morning. By that afternoon, she was on a plane back to the West Coast.

In the end, Creative Director Landis Smithers was happy that Dallas wanted what Marfa had scorned. And Prada Marfa, now with security cameras firmly in place, will soon enter its second decade.

Maybe TxDOT knows what they’re doing after all.

What’s the difference? It seems like a matter of maintaining the “Marfa” brand by avoiding anything risqué. Richard Phillips is as important an artist as Elmgreen and Dragset. WTF? Playboy Marfa was the edgier piece, but it’s just as well that it’s gone. It would have become another boring selfie-magnet after a few years.

In encourage vandalizing it to the point that it’s no longer cost effective to protect it. Then it will become the artwork it was intended to be when it was installed.