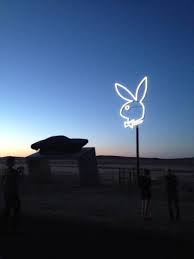 Playboy Enterprises has leased some 6,500 square feet of land just west of Marfa and installed a large sculpture of a Judd-like cement box with a car on top and a nearby 20-foot tall neon Playboy bunny, causing quite a stir in West Texas—not just because of the sculpture, but because of its lack of explanation.

Its potential existence was originally discovered and reported only recently by the local Presidio County newspaper Big Bend Sentinel because of the paperwork that Playboy had to file in order to acquire the electricity needed to light up the giant neon bunny. The article was first published on May 30 by the Sentinel and included diagrams and working sketches that had been filed with the county. “Unlike many Big Bend construction projects,” reports Marfa Public Radio, who has been snapping photos of the sculpture’s progression, “the sculpture went up quickly.” Framework for the block and the ears were in place this past Monday, and the installation was completed by Wednesday evening. 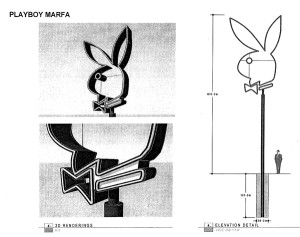 There are also reports that the installation will include a 24-hour video feed. It is unclear whether the video is intended to be part of the art installation, or as a security measure against what most locals consider to be inevitable vandalism. Recalling the almost-immediate vandalism of the Prada Marfa installation of 2005, one contributor to the Marfa Public Radio Facebook page simply referred to it as “target practice.”

According to Presidio County Judge Paul Hunt’s office, writer/curator/artist Neville Wakefield has been working on the temporary installation (the term of the land lease is about one year). Wakefield, who is Playboy’s new creative director of special projects, had previously curated an exhibition at Ballroom Marfa in late 2011, although Ballroom has no direct connection to this project.

Everyone from the Big Bend Sentinel to the Huffington Post has been trying to get more information about the installation, but neither Playboy Enterprises nor the project’s PR firm has yet to comment.

Just to clarify – the Huffington Post proper is not working this story that I know of… Their post was merely a pickup of an article I wrote for Hyperallergic which sought to bring attention to the story beyond the regional news outlets… That article can be found at http://hyperallergic.com/73377/why-is-playboy-erecting-a-neon-bunny-in-marfa-texas/