As visual display, Hills Snyder’s installation Steam is anti-spectacle. Someone fitted with headphones and a sleeping mask is sitting on a tilted-back recliner sited just inside the white-walled room that houses Ana Poplawsky’s AP Art Lab. On the walls are peculiarly shaped bits of sky with fragments of cloud, photographs that have been cut up and clumped around the door and above the floor. A not-quite discernable sound buzzes in the background, and if there are any other viewers, they most likely speak together in subdued tones, glancing occasionally at the chair’s occupant. 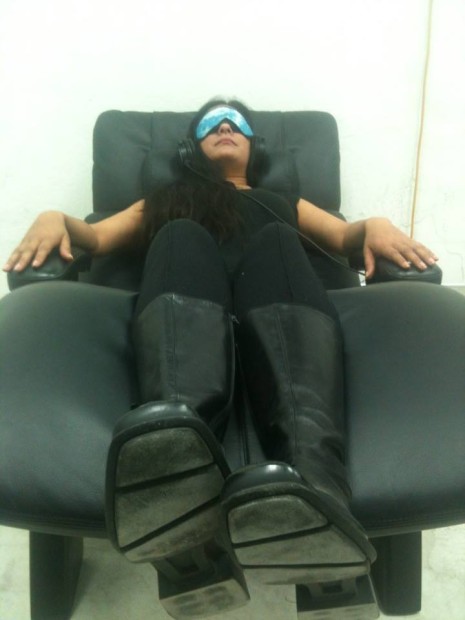 The scene is reminiscent of scenes from Chris Marker’s 1962 sci-fi flick, La Jetée, about a post apocalyptic time traveler who reaches into his past under some mysterious sedation. If you sign up to take this peculiar trip, available through April 20, you’ll discover the comparison is eerily apt. 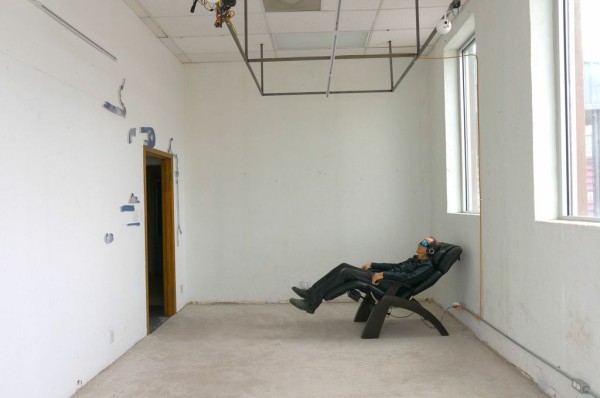 Volunteers experiencing the chair are in for an overwhelming experience. Like an aural version of Oculus Rift, the sound drifting in from the headphones creates a virtual reality that is as unsettling and seductive as peyote. During the opening last month, Snyder found three San Antonio arts writers to take the voyage. Sarah Fisch seemed a bit unsteady on her feet as she emerged, latter describing it as “memorable and haunting.” SA Current editor Callie Enlow remarked, “this will put you in an altered state for hours afterward. The closest thing I could compare it to would be Kundalini yoga mixed with a trust fall,” while Casa Chuck Arts Residency director Anjali Gupta came up with, “Prada, baby…third hand, of course.” Thanks to Hills for providing the above quotes; the following is an attempt to describe an immersion I took a few weeks ago.

The experience, I was told, consists of 72 minutes listening to two playings of a mix Snyder first made in Banff, Alberta, of ambient sounds recorded in 2001 on an Artpace travel grant in Amsterdam. Using an idiocentric mapping device, Snyder went about Amsterdam picking up bicycle parts–broken chains, gears, and the like–and recorded the ambient sounds at each site. Recursively mixed, bits of conversation, footsteps, and traffic cycle through a surrounding landscape. For me, it was a near-doppelganger of walking through late afternoon crowds at the Jemaa el-Fna in Marrakech, passing away from the Dutch tourists, into the Casbah. 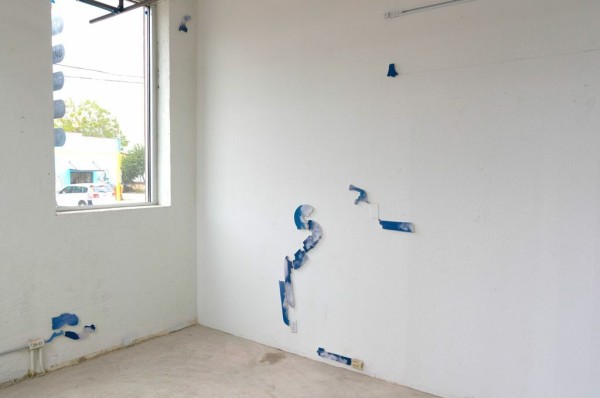 Left on my own with the headset, Hills told me to put my cell phone on vibrate–he would give a call when I was supposed to emerge. Eventually, I started to drift out of my Moroccan memories, gave him a confused phone call during which I claimed the sound kept changing, had yet to repeat. “You’ve stayed under an extra hour,” he told me. “Congratulations!”

Other visitors are offered a more controlled experience. Contact Hills Snyder at 210-473-9062 to schedule a 72-minute immersion in Steam. The show is open to upright visitors, also. 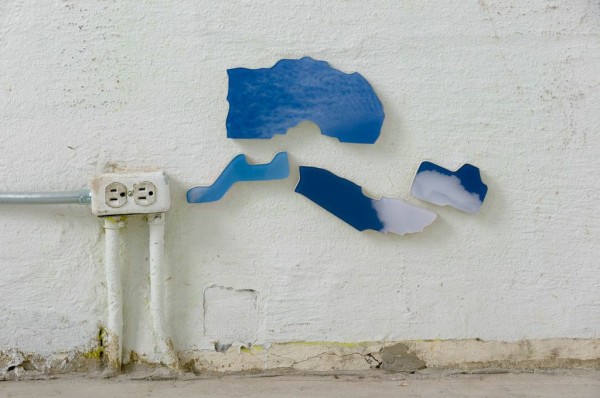 There will be a Steam Closing Party TONIGHT, Friday, April 4, from 7-10pm, although the project will remain on view through April 20 at AP Art Lab, 1906 S. Flores, San Antonio.

what are you talking about? god.
i listened to it. and.