Art where you find it: Port Aransas rental condo

I’ve been in a hopeless mood today, semi-flattened by a multiple sucker-punch of sad and horrifying news — massacre in Norway, the continuing fiasco of waste, loss and futility in Afghanistan, the budget talk breakdown and brinksmanship, a train disaster in China, the shocking failure of the genuinely talented Amy Winehouse to find her way back from oblivion.

The inescapable information age ensures that we’re continually traumatized in immediate, real time. Even if the only media you consume is dedicated to celebrities and Jackass. It’s overwhelming.

That’s why today, Chupacabrona would like to take you away from all that. This blog post is dedicated to a painter, CJS, whose still life and landscape works hang in a rental condominium called Mustang Towers in the town of Port Aransas, which sits on Mustang Island on the Texas coast. 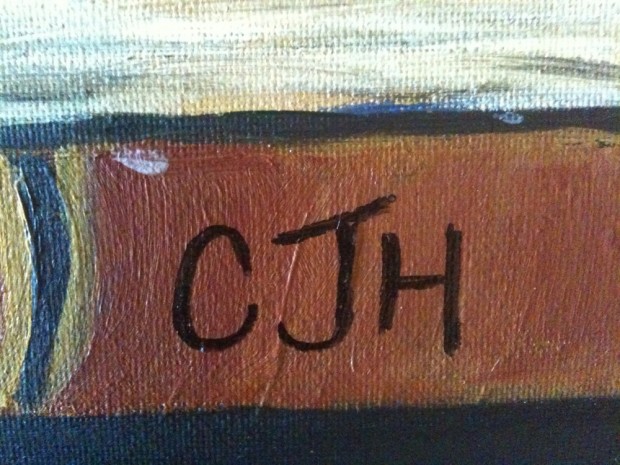 You may be familiar with Port Aransas, particularly if you grew up in central/South Texas; for thousands of families for many generations, that’s “the Coast.” Particularly if you didn’t know any other seaside, Port A was beach paradise, where you went every summer to bask under a searing sun, to fear or embrace the warmish, murky, roiling seawater. I loved it and still do. Running around on a Port A beach, you earn nice soft feet from the savage friction of rough brown Gulf sand. Hulking, largely-abandoned oil rigs lord it over the horizon, and turn twinkly and beautiful, like imaginary cities at night. I was one of those kids who didn’t care that I couldn’t see my feet in knee-high surf, endured moments of Jaws-infused shark fear as my brother and I pushed past the line of breakers and field of swells to the second sand bar, and dismissed with a shiver the momentary swish past my legs of little brown perch. I got stung, more than once, by Portuguese man-‘0-wars and bitten by sand fleas, and sunburnt to blistering.

My mother, a native Midwesterner, saw the ocean for the first time in her life at Port Aransas when she was about 20 years old. It disappointed the hell out of her, which is totally understandable. Port A isn’t Hawaii, or Bali, or Florida, or California, or even the Jersey Shore. One of the things I’ve come to appreciate about it, though, is its cheery openness to people of all classes and colors. It’s not the Hamptons, or even South Padre; almost any family can find a way to spend a weekend at Port A, eating peel and eat shrimp and drinking Coors light in a can, brown kids and white kids digging holes in the sand. In this way, Port Aransas reminds me of those working-class British resort towns, which while a lot clammier and overcast, evince a similar overall feeling that everybody deserves the seaside whatever the peoples’ or the seasides’ failings. The bodies aren’t perfect, the sea is cold or hot or rough, the accomodations can be dicey, there’s on-purpose kitsch and not-on-purpose kitsch, and you can fucking relax, already.

So this summer, just like almost every summer of my life, I went to the Coast with my family — parents, my brother and sister, and their spouses and children. We had a blast, as usual. Everybody frolicked and swam and got sun- and sea-scoured, like in a religious ritual. Except Mom, who still hates it, and watches us from the balcony with binoculars and worries when somebody goes out too far. 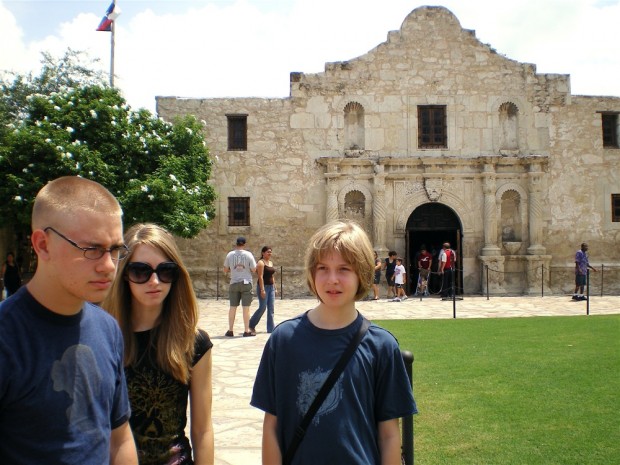 It’s nice to take a break from the tourist town I live in. 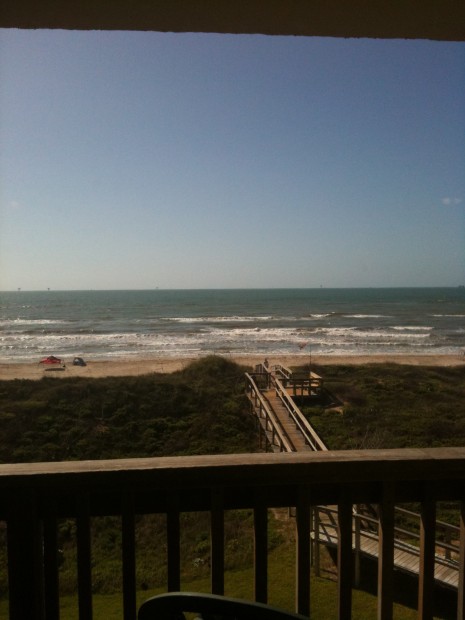 …And hang out in a tourist trap where I’m actually a tourist. View of Port A. beach from condo balcony. Not shown: family groups centered around makeshift shade structures blaring Toby Keith and flying, sometimes, both the Texas and the confederate flags. Tons of kids wearing arm floaties. Old men unselfconscious of hairy beer bellies, in funny hats. Teens in yelping, jerky, oblivious swarms. Abuelitas sitting in half-sunk folding chairs, laughing as their grandkids pile sand on their feet. Gobs of tar. (Which was a big problem when I grew up; there was even turpentine at the wash-up stations to remove clots from your bathing suit hair and skin; the tar thing has actually improved).

There are condo developments and towers all along the shore, though not to the extreme, squeezed-in, and showy extent that there are in South Padre. Each unit is owned by (usually) somebody you don’t know, and it’s always fascinated me to see how they decorate. Lots of beachy stuff, as you can imagine; posters of seagulls sitting on piers, fanciful beach scenes that look NOTHING like what’s outside, lamps shaped like dolphins, anchors, branches of coral.

This summer was the first time, though, I saw evidence of original art in the condo where I stayed. This exhibition included beach-related and non-beach related themes. They fit into no contemporary aesthetic echelon; not skillful executions of the mundane, no discernible social message, no painting-about-painting business, and completely devoid of the visceral visions of Outsider Art.

Let’s take a look at CJH’s oeuvre. It’s gonna be tempting to make fun, but let’s not. Can we find it in ourselves to enjoy CJH? 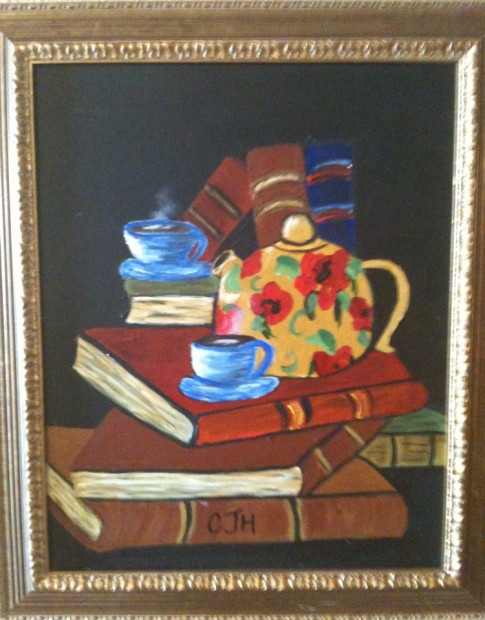 I like this one, which I like to call “Tea and Books Go Together.” It’s not site-specific regionally, since pots of hot tea (or I guess that could be coffee) aren’t really a Port Aransas thing. Also, one seldom sees leather-bound tomes down there. But it’s the notion of well-read refinement worn down to coziness via easily-recognizable symbols, plus the placement of the sig, that I really like. It says to me “I, CJH, invite you to slow down your hustle, read something, and have a nice cup of something. You could rest your tea on a pile of books and think, too.”

The irrational composition goes a long way towards reification of tea-drinking and book-reading, I think. The book-spine towers and precarious setting of the larger, steaming cup of something acts as an unpretentious Surrealism; what couldn’t really be, is. Also, the extremely truncated spigot on the teacup is in nice contrast to the Gauguin-like floral pattern. 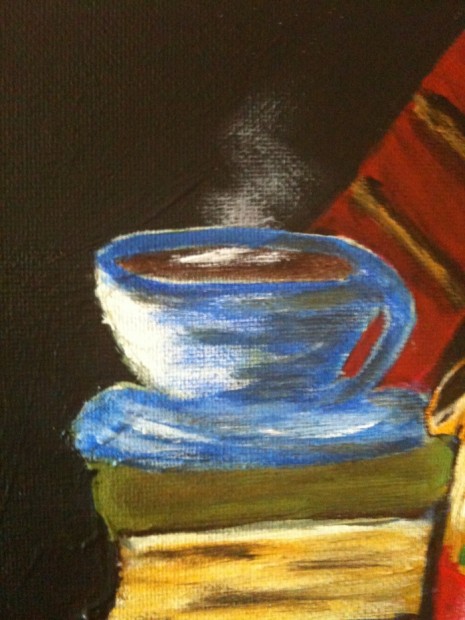 There’s a generous spirit at work here, an unfussy gestural quality to the paint handling that’s less naif than cuneiform-like. We know what she’s getting at. I think it’s a she. The teapot connotes femininity to me. I could be wrong though, as CJH proves less feminine in her/his other beverage-based still life: 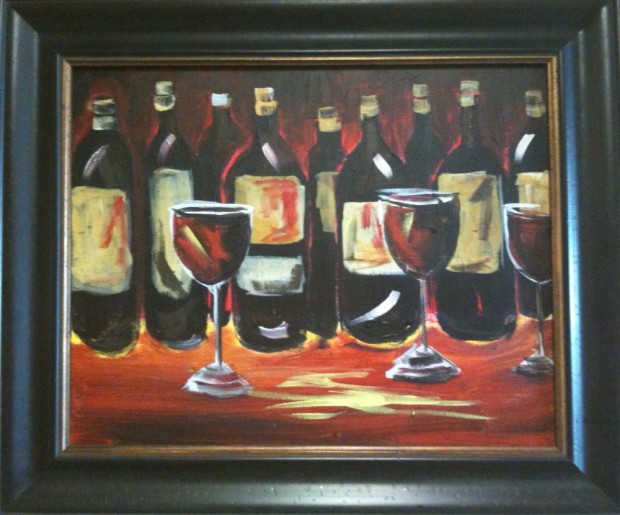 Sort of phallic, no? All those upright bottles. I like this one, which I call “Look at all this wine you could have,” because it also celebrates relaxation, comfort, and beverages. This painting wants you to enjoy yourself. 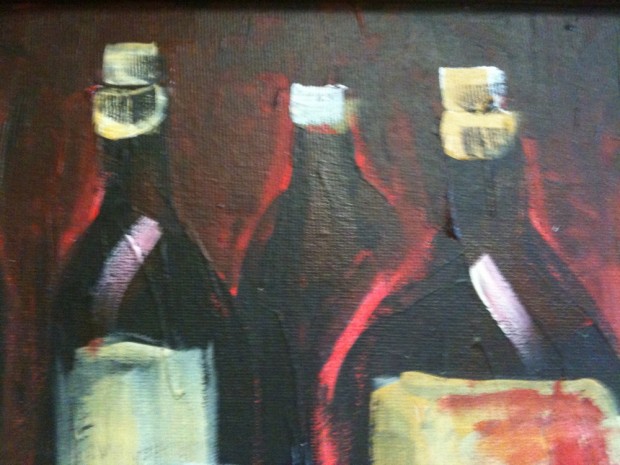 The object differentiation and bold strokes of light are unconvincing, but I know just what CJH is going for, and I appreciate that. I like tea, and I like wine. Sometimes the occasion calls for one, sometimes for the other. There’s a duality there, but the overall message is one of celebration.

The coup de grace for me, though, is “Palm tree in the bathroom,” which suggests through its painterly surface to be the work of the same artist. Note: this is not in the master en suite bathroom, but in the “guest,” or presumably “lesser” bathroom, which makes the effort all the more valuable. And yet, its generous scale and escapist theme treat the space as an extension of the natural world, an acknowledgement of the oasis of the mind you go to the Coast to experience. 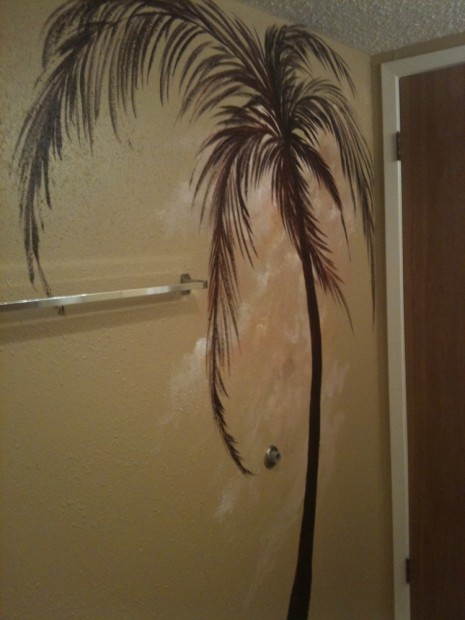 CJH unafraid to use the entire wall. Interestingly, palm trees aren’t native to the Texas coast, I don’t think, but the idea is still emblematic and accessible. 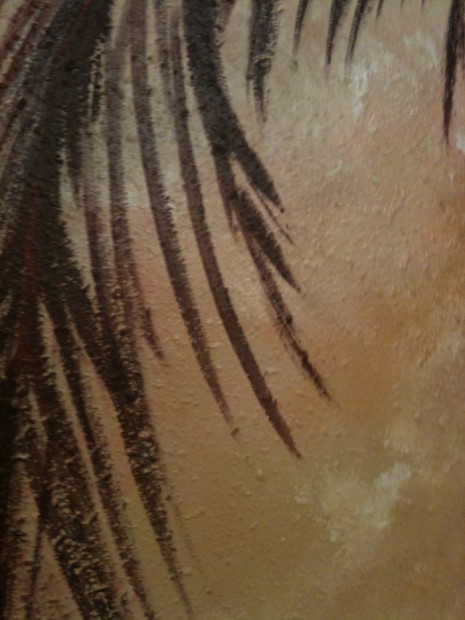 I’m not arguing that CJH is a talented painter, or that s/he should anticipate a gallery show. But in the context of a slightly-shabby but eminently serviceable beach condo, amid the unglamorous “come as you are” spirit of Port Aransas, Texas, it serves a beneficial function. CJH isn’t just somebody who’s filled his or her condo with dolphinalia, but an artmaker who has used materials and time in order to express a sense of fun, and heighten the humbly blissed-out experience of losing your regular self at the edge of the ocean. In troubled times, I look upon Port Aransas and the work of CJH with gratitude. 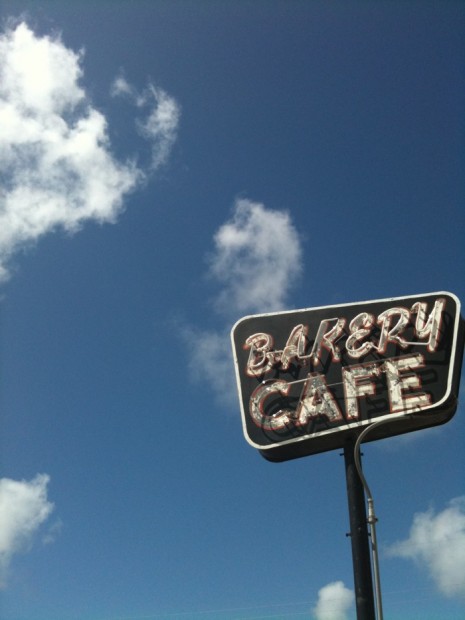 This is the nifty sign for the Bakery Cafe, which is in Aransas Pass, a ferry ride back to the mainland from Port A (i.e., take the ferry from the island rather than crossing the Packery Channel Bridge through Corpus Christi.) The fried seafood is maybe the best in a region filled with fried seafood. If fried seafood isn’t your thing… you may have a tough time in Port A. Anyway we got there as breakfast service was ending, and the biscuits look divine, too.

Did you go to the Coast?

I read your article with great interest since I claim Port A as my hometown. I am always interested in how someone else sees it. I sympathize with your mother’s disappointment because I felt the same way about the east coast and the Florida coast. Of course, our water is a gulf and very warm due to the Gulf Stream and the water on the east coast is the Atlantic ocean…so very much colder. I do not stay in the condos or rooms when I go down to “the island” because I have friends who allow me to stay at their place. I’ve had the pleasure of cleaning up after the tourists though and that’s always been something to talk about over a glass of wine.
I’m glad that you continue to enjoy your time each summer in Port A. I get close enough to smell the air and I start to relax. It has that effect on many of my friends….I think it causes the “island time” mentality…slow and easy!
I enjoyed your comments about CJH and even like that we will probably never know if it’s a he or a she!

This was so awesome, Sarah! Port Aransas was our summer paradise for most of my childhood vacations, and I miss it all the time.

I love the paintings, especially the one on the bathroom wall. My mom was an artist and she painted very similar artwork on our bathroom wall!

This was a lovely break from the outside world…

Hi Sarah,
My name is Jane and I’m with Dwellable.
I was looking for blogs about Port Aransas to share on our site and I came across your post…If you’re open to it, shoot me an email at jane(at)dwellable(dot)com.
Hope to hear from you soon!
Jane