by Hills Snyder May 2, 2013
FacebookTwitterEmail

My favorite merit badge was the “Fingerprinting” badge, which I’m sure they don’t even have anymore. My father was a detective and gave me a fingerprinting kit when I was young, I could lift prints off practically any surface. And I was an expert at reading prints and their patterns. Plus, it was my first merit badge.

2. You look like a guy that was in a teen combo. Or was it more like a garage band?

I played the drums (not very well) in a garage band. My friend Todd Robinson played guitar and he went on to fame as the guitarist for the Latin superstar Luis Miguel.

3. Have you ever tied a knot while surfing?

Yes, I have. More importantly, in Boy Scouts we learned to tie our pant legs together and make an inflatable flotation device in case our boat ever sinks. 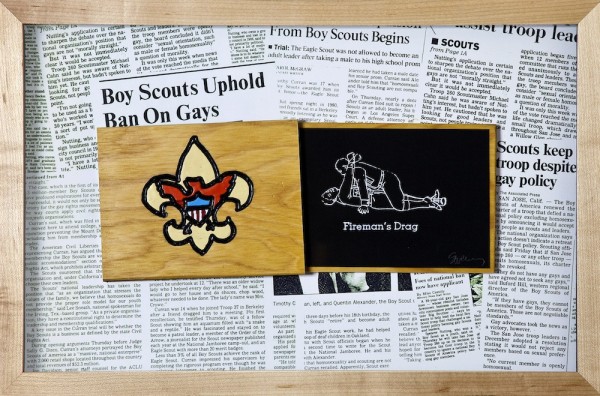 4. What is the most interesting sentence that ever passed through your mind while handling baggage?

“After I fill this 737-300 with this mail, freight and luggage; and after they put the fuel and people on, this thing will weigh 133,000 pounds. I can’t believe this thing will then lift off the ground and fly to New York. That’s really fucking amazing.” 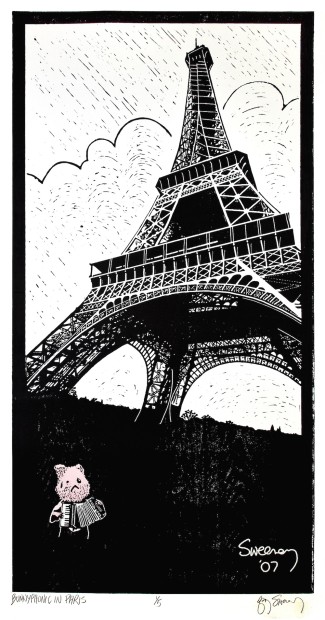 5. Have any random passengers at the Denver Airport ever caught you admiring your own work?

Oh, yes. I have a relative who was there one time, and he would go up to groups of people looking at the maps and say, “you know, my wife’s cousin’s husband made that map!” 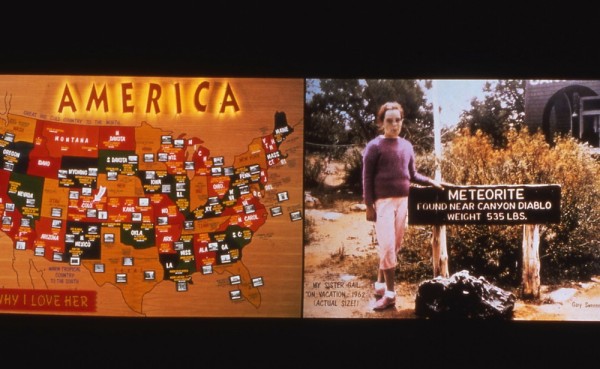 One prepared by the chef of the Thai Royal Family. I would hope, however, that Mr. Pynchon could join us.

7. If you were forced at gunpoint to read a book, which one would it be?

I would like to be reading the book, “How To Disarm Someone Holding A Gun On You.”

8. Was your dad into detective fiction?

No, but I can guarantee you he LIVED detective fiction at his job on the L.A. Harbor waterfront. 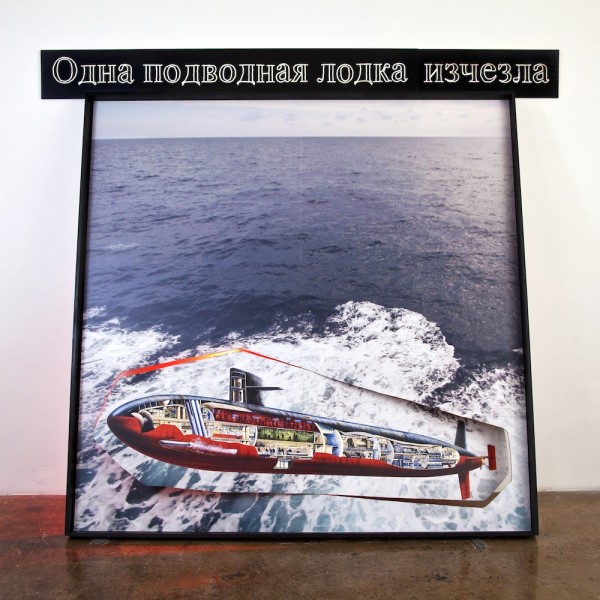 9. What is the best concert you ever attended in Los Angeles? Denver? San Antonio?

That’s a tricky question. I saw so many concerts in L.A., but Cream, Bob Marley, Led Zeppelin and the Clash stand out. Saw the Rolling Stones (Exile on Main Street) in a very small venue. Actually, the list goes on. In Denver, I saw Los Lobos in front of 400 people right before they hit it big; and Richard Thompson in a small place; and the Talking Heads twice at Red Rocks, which is the coolest concert setting in America.

10. What is the most interesting sentence that ever passed through your mind while alone with either of your parents prior to 1975?

The one that told them that my dream of becoming an oceanographer had been replaced by changing my college major to studio art. 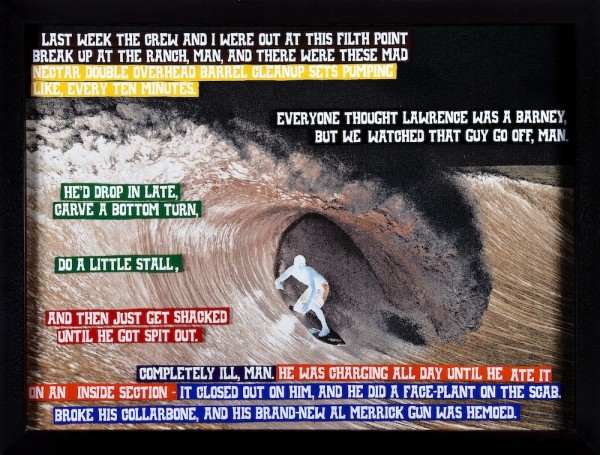 11. What tipped the balance, when, as a young child, you became a shoe guy?

My first brush with shoes occurred in high school in 1968, when I painted an American flag pattern on my white Chuck Taylors. Hard to imagine now, but that was considered a radical fashion statement at the time. A little while later, I bought some ridiculous platform shoes in New York City, and walked around looking like Elton John.

12. How ironic would it be for San Antonio to have an earthquake?

Here’s my idea of ironic:

There once was a Beetle Bailey cartoon in which Zero shows up in a crumpled uniform.

Sarge: That’s a very well-pressed suit you have on there.
Zero (looking at his shirt): It looks crumpled to me!
Sarge: You don’t understand irony, do you?

Next panel has Zero ironing his shirt, saying, “I’ll show you who doesn’t understand irony!”

13. Have you ever worn a pink carnation?

Probably as a gift from a prom date. However, my mother grew orchids, so my prom dates were always decorated with monster orchid corsages.

14. Given that 6% of CEOs are psychopaths, as opposed to the usual 3% of the rest of the population, how do you explain your present occupation?

Baggage handling would not be a desired occupation for psychopaths. There is no power or manipulation involved.

15. What have you done today to deepen the mystery?

I try to deepen the mystery, but it’s not as if I’m Marcel Duchamp. I mean, everybody knows we Geminis are shallow people! 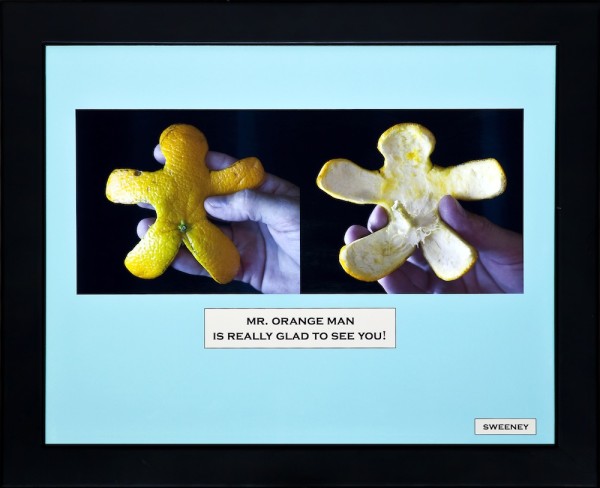 16. Your Georgia O’Keefe piece reminds me of those “spiders on drugs” photos. Care to comment? 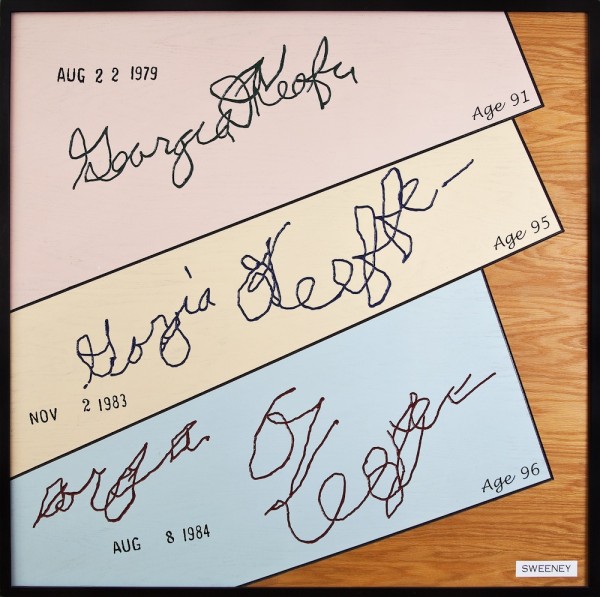 17. Did you put the bad in Baden-Powell?

Speaking of psychopaths…no, I didn’t. I did, however, put the “well” in Baden-Powell. 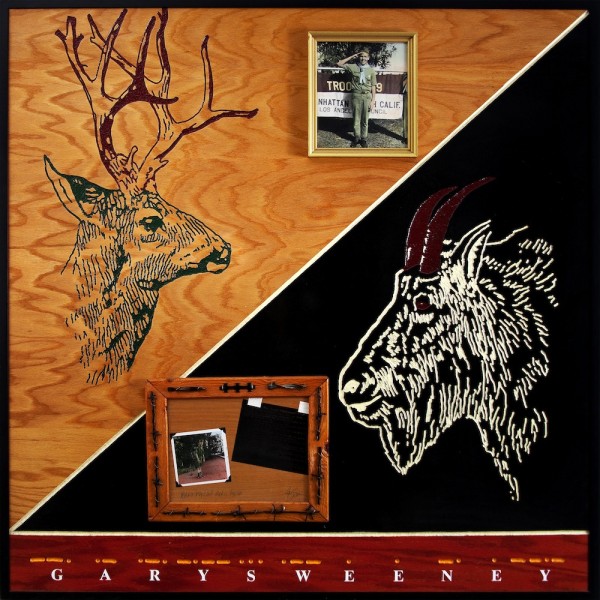 It was a 1964 Ford Econoline, and my father drove us 9,000 miles around the U.S. in the summer of 1964. The highlight for me was John Kennedy’s temporary grave. 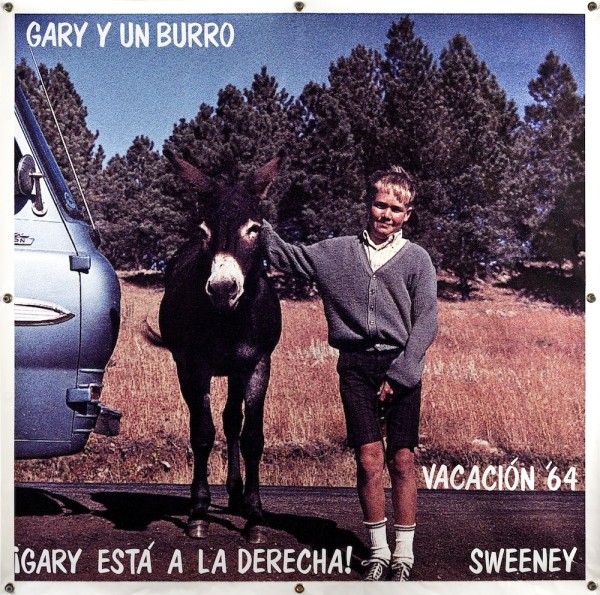 19. Were you ever given a hard time for wearing loafers at Scout meetings?

I don’t EVER remember wearing a pair of loafers, and yet there they are in the photograph!

20. If you were given the task of signing for a televangelist broadcast would you fuck with people?

No. As much as I dislike televangelists, I don’t like ambushing people who are not in on it. I think that’s mean. There is an expectation for most people who visit my artwork that there will be some surprises involved, and we can enjoy that together. 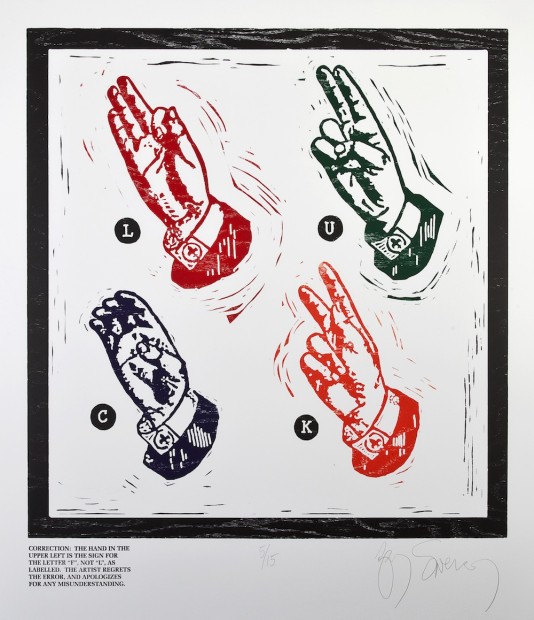 21.  What, if you had one, would be the nature of your temporary grave?

My temporary grave would be much like JFK’s: a pile of evergreen branches with an eternal flame on top. Caps placed on the pile representing the four branches of the military. All this bordered with a white picket fence and 24-hour color guard.

22. Please complete this limerick: There once was a man named Sweeney…

The next line refers to his penis,
It’s clear from the start,
That his strong-suit is Art,
But he obviously knows nothing about rhyming.

Gary Sweeney: A Forty-Year Overview is on view at the Blue Star Contemporary Art Museum though May 11.

All photos by Jenelle Esparza.

How did this video not go viral eight...

Interesting. I like the donkey in your vacation photo ♡ also wanted to say I enjoyed the title you gave this article as I was recently checking out a book called “How to Pet a Porcupine”