Over the last few months, art organizations across Texas, including the Amon Carter Museum of American Art, the Kimbell Art Museum, the McNay Art Museum, the Meadows Museum, and the Rockport Art Center, have announced recent acquisitions. 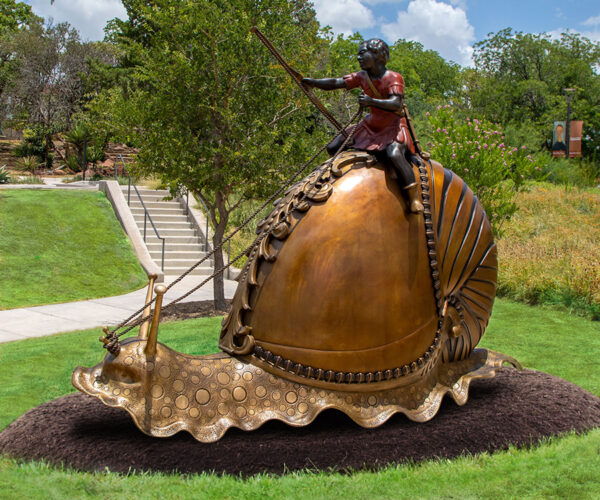 Hank Willis Thomas, “History of the Conquest,” 2017, bronze. Collection of the McNay Art Museum, Museum purchase with funds from Ben Foster in memory of Raye B. Foster, 2021.42.

In July, the McNay Art Museum in San Antonio announced its acquisition of History of the Conquest by Hank Willis Thomas. The seven-foot-tall bronze sculpture features a child holding a bow and reins as it sits atop a giant ornate snail. The seemingly playful piece references a German sculpture in the collection of the Wadsworth Atheneum Museum of Art titled Nautilus snail. The Wadsworth museum’s website suggests that the Black figure in the much smaller sculpture by Jeremias Ritter was meant to be a personification of the continent of Africa, with the sculpture serving as an allusion to the origin of the nautilus. Mr. Thomas’ work is by contrast a critique of prejudiced depictions of people of African descent. The piece is installed at the Mays Family Park near the Russell Hill Rogers Sculpture Gateway. 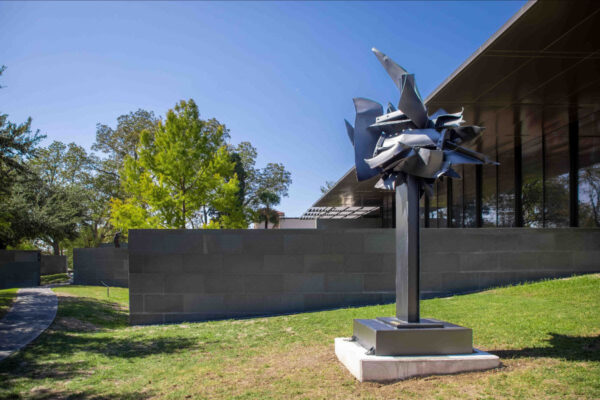 More recently, the McNay also announced the acquisition of the sculpture Redemption IV by San Antonio-based artist George Schroeder Jr. The work is made from salvaged metal, which has been hammered, bent, and shaped into organic forms.

In August, the Meadows Museum at Southern Methodist University in Dallas, announced the acquisition of seven works of Spanish art ranging from the 17th through 20th centuries. The pieces include three paintings, which were acquired through donations made in honor of the museum’s late director Mark Roglán, and four works on paper, two of which are by Francisco José de Goya y Lucientes.

In a press release announcing the acquisitions, Meadows Museum Director ad interim and Curator Amanda W. Dotseth remarked, “These acquisitions of Spanish paintings and prints in memory of Dr. Roglán participate in the fulfillment of the museum’s mission to tell new stories about the history of Spain and its art. The works also represent different historical moments, from the early modern to contemporary periods, and are prime examples mostly by artists hitherto not represented in the permanent collection. They likewise promise to inspire new educational opportunities for campus and North Texas communities.” 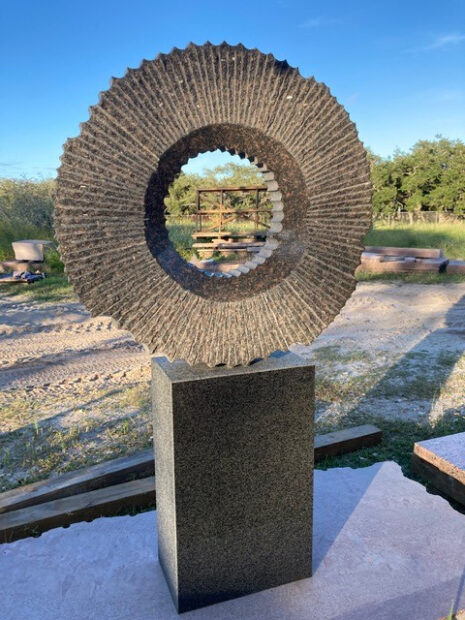 In October, the Rockport Center for the Arts (RCA) announced the acquisition of Moonscape by Corpus Christi-native Jesús Moroles. The sculpture will join eight other works, including another sculpture by the artist, which will go on display in the Patricia Bennett Moore Sculpture Garden as part of RCA’s new 1.2-acre campus that debuts next month.

The sculpture, which was carved from Dakota granite by Mr. Moroles in 2014 in Rockport, is approximately 6 feet tall and weighs 1,400 pounds. The piece features a 41-inch interpretation of the moon mounted on a 32-inch tall rectangular base.

In a press release RCA executive director Luis Purón stated, “Jesús was a talented sculptor with an amazing spirit. His untimely passing due to an automobile accident was a shock to the art world and to Rockport, the community he called home. We are so pleased to be able to showcase his striking pieces, in the form of sculptures along with five of his granite benches that will also be part of the new RCA sculpture garden. An enduring testament to his creative genius.” 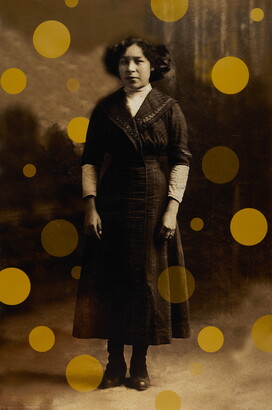 Also in October, the Amon Carter Museum of American Art in Fort Worth announced the acquisition of works by over 16 artists. The newly acquired pieces include drawings, paintings, sculptures, prints, and photography, some of which are currently on view in the exhibition Speaking with Light: Contemporary Indigenous Photography. Many of the works are by living artists and explore American history through a critical lens. 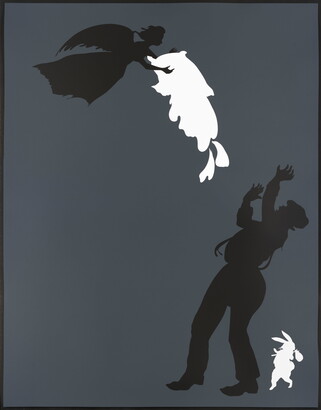 Some highlights of the acquisitions include Emancipation Approximation (Scene #9) by Kara Walker, Lowrider by Luis Jiménez, Set-Up (The Outlaw) by Stephanie Syjuco, Nocturne for Robert Fuller and Malcolm Harsch by Sandy Rodriguez, A Beautiful Despair (Cube) by Anila Agha, Grandma by Hulleah Tsinhnahjinnie, The Texas Cabinet by Mark Dion, and Seven and Seven Flower by James Surls. Additionally, the museum has acquired over 300 drawings and watercolors as well as a selection of books, letters, and ephemera by and related to Hudson River School artist John F. Kensett.

This past week, the Kimbell Art Museum, also in Fort Worth, announced the acquisition of Still Life with a Bowl of Strawberries, Basket of Cherries, and Branch of Gooseberries, painted by French artist Louise Moillon in 1631. Though little is known about Ms. Moillon’s career, she was one of the greatest French still-life painters of the 17th century and has been called the “unexpected genius of the period.” 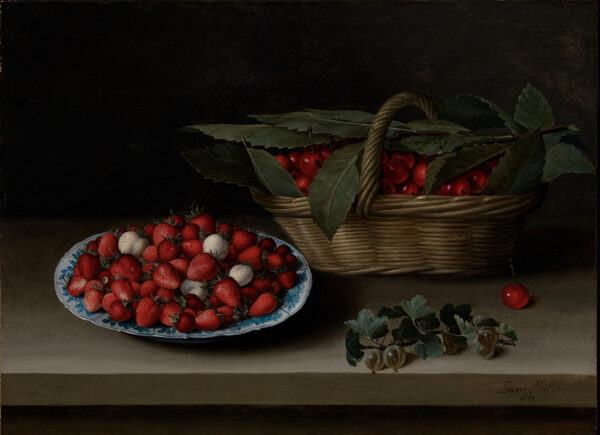 In a press release announcing the acquisition, Eric Lee, the museum’s director, stated, “The Kimbell Art Museum is delighted to add to its renowned collection what is unquestionably a masterpiece by Louise Moillon. The painting is an exceptionally well-preserved composition, a mysterious image of simple fruits painted in jewel tones on a wooden panel. It came to light for the first time just this year and is a prime example of Moillon’s keen observational skills and poetic approach to still life.”

The painting, which had been in a private collection, was unknown to scholars until it appeared at a Paris auction in March of this year. The Kimbell purchased the piece from an American collector through the New York dealer Adam Williams. The work went on public view for the first time in its history on November 18, 2022 in the museum’s building and will remain on view for the foreseeable future.