Jesús Bautista Moroles died yesterday in a car accident north of Austin, near Georgetown. The Rockport Pilot reports that the artist returned to Rockport from an installation in Dallas in order to report for jury duty on Monday, then left in the evening, headed towards Oklahoma to begin work on his next commissioned piece. As he was traveling on IH35, Moroles was involved in the deadly car accident.

Born in Corpus Christi in 1950, Moroles was an internationally renowned sculptor and National Medal of Arts honoree whose work has been featured in museums and institutions around the world, including the White House and the Smithsonian Institute. In 1978, he received his BFA at the University of North Texas, Denton, after which he served as apprentice to sculptor Luis Jiménez and then spent a year working in Pietrasanta, Italy.

In 1981, Moroles purchased his first large diamond saw, which began his long-term commitment to create a studio in Rockport. By 1983, the Moroles studio became a family effort involving his parents Jose and Maria, his brother, Hilario, his sister, Suzanna, and brother-in-law, Kurt Kangas. In 1987, Moroles completed his most visible work, “Lapstrake,” a 64-ton, 22-foot-tall sculpture located across the street from the Museum of Modern Art in New York. His largest single work is the 1991 site sculpture, the “Houston Police Officers Memorial.” There are also several sculptures by Moroles in his hometown in the sculpture garden at the Rockport Center for the Arts. 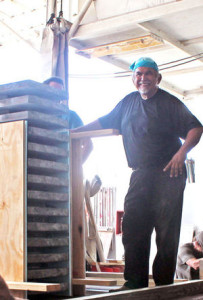 Full Details on the Jesus Moroles Memorial in...

A Public Memorial and Tribute to Jesús Moroles

A Humble Giant, it was my honor to nominate him for The Art League or Houston’s Texas Artist of the Year in 1989 during my tenure as Chairman of the Artists Directors of the ALH. We met up at various International Sculpture Center events in later years and he was always the same Jessie I had met in the early 80’s after his Rome Prize stint. Condolences to his family, loved ones and many friends world wide!

Adored him – what a wonderful man and phenomenal artist. Sick to hear this.

A great guy and a huge loss. He was certainly one of the most successful artists in Texas, and well deserved.

My prayers, my love and my heart.
I will help in any way I can,
Jennifer

Suzanna, I am here for you.

Another man of fire leaves!
Deepest condolences to the Moroles family.
Jesus was a giant, indeed!

We will forever treasure the enrichment Jesus’ work has brought into our lives. Thank you Jesus. A legacy……. and a wonderful human being. Rest in peace.

He was a great man who really made a huge mark in the art world and on the lives of so many he touched. He was a giving man. It is a tragic loss to all who knew and loved him and to the art world as a whole. God bless you Jesus and your new beginnings in heaven.

Prayers go out to the fsmily and I pray for you all to have a speedy recovery from this huge heart break.They worldbhas lost a very humble and beautiful artist

I want to send prayers for his family, and his good soul which has left us with his many treasures of beauty and expression which remain to lead many fresh hearts to their finest hours of imagination. My sincerest condolences.

Jesse, I’m sorry for your loss. I’m glad to have known you. I’m proud of your accomplishments. “Most Likely to Success.” And you did!

Our sculptures at the World Sculpture Park in the City of Eternal Spring, Changchun, China, will continue to bring joy to the visitors for many year to come. They are living stones that also speak in their own special and unique ways.
May your spirit continue to mentor and guide the few who are dedicated to this art form .

A sad loss of a role model, great artist, and nice guy.

A great artist, a great friend, a great loss and a great sorrow!
Love always!