For Freedoms’ 50-State Initiative Comes to Texas this Fall 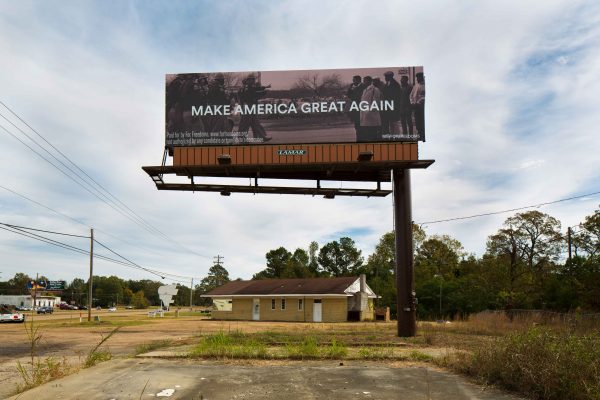 Today, Hank Willis Thomas and Eric Gottesman’s artist-run initiative For Freedoms announced the launch of The 50 State Initiative, a project that will run from September to December of 2018. Initially established in January of 2016 as the “first artist-run super PAC,” For Freedoms’ mission was to, per Gottesman, “elevate and expand the dialogue that no longer exists in our sound-bite culture, its ‘gotcha’ tactics, or in its oversimplified conversations.” Unlike many other super PACs, For Freedoms was unique in that it lacked partisanship and instead let the voices of artists participating in the project be heard. Contributing artists gave their works to be used in various ways of advertising — including billboards, subway adverts, and social media posts — and ultimately, an art show at Jack Shainman Gallery in New York. While many of the included artists lived in major cities, Thomas said that for the project, For Freedoms was looking to place ads “in the heartland,” where airtime and ad space was cheapest.

Since it’s first June 2016 show at Jack Shainman, For Freedoms has participated in the 2016 Creative Time Summit, won a 2017 ICP Infinity Award, and hosted numerous town halls and public conversations, and pop-up shows across America, all aimed at political engagement. Of course, since the organization promotes a diverse array of views, public response hasn’t always been completely supportive. For example, in 2016, Mississippi’s Governor Phil Bryant called a billboard by For Freedoms “reprehensible.” (The billboard featured then-President-elect Donald Trump’s slogan “Make American Great Again” overlaid on a photograph documenting a Civil Rights confrontation on the Edmund Pettus Bridge in Alabama.)

For its 50 State Initiative, For Freedoms (this time the For Freedoms Federation, LLC, not the For Freedoms super PAC), is collaborating with local partners across all 50 US states to realize the production of 52 artist-designed billboards (one in each state, plus the District of Columbia and Puerto Rico). Community programming will come along with the project, including town hall meetings, special exhibitions, etc., all aiming at facilitating conversations around local and national issues. For Freedoms’ list of Texas partners currently includes:

For Freedoms currently has 52 Kickstarter campaigns aimed at funding the billboards. Here’s a link to the Texas campaign.