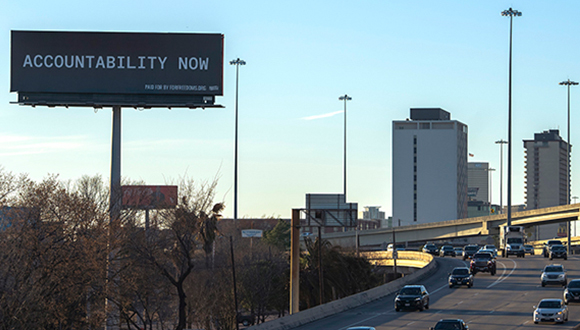 Swedish-American conceptual artist​ ​Michele Pred has launched a billboard campaign, and one of her billboards is now installed in Houston, visible on northbound I-45, near the Dowling/Emancipation Street exit and the I-69 interchange. The billboard and its text “ACCOUNTABILITY NOW”​ will be visible for four week​s, through March 23. Pred’s message is one directed at “the American people.” Says Pred about the project: “Hold insurrection-supporting politicians accountable. It is critical to have artwork in the public sphere to ignite conversation and inspire civic engagement.”

Inspired by the Capitol insurrection, the artist designed and raised money for the two-billboard project (the other was installed on January 18 in Saint Louis) via Kickstarter. Josh Hawley, junior United States Senator, has represented Missouri since 2019, while Ted Cruz, junior United States Senator, has represented Texas since 2013. Both Cruz and Hawley have been called upon to resign since the Capitol insurrection, as reported by the news organization Politico. 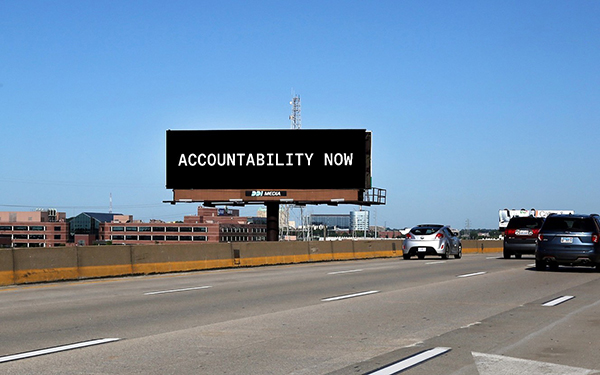 ​For Freedoms​, an artist-led organization that “models and increases creative civic engagement, discourse and direct action,”​ paid for the billboard, as stated on the billboard. Pred’s work has previously been featured on For Freedom’s website. The artist is also using the billboards as a voter-registration effort.

Michele Pred is a Swedish-American conceptual artist whose practice includes sculpture, assemblage, and performance. Her work uncovers the cultural and political meaning behind everyday objects, with a concentration on feminist themes such as equal pay, reproductive rights, and personal security. Projects often contain social components that drive the conversation into public spaces; such as the intersection of personal space and security by using airport-confiscated items after 9/11, the cultural background of the fight for reproductive rights using thousands of expired birth control pills, and the continuing economic and political struggle for women’s rights represented by her modified vintage handbag editions.

For Freedoms’ 50-State Initiative Comes to Texas this...