“The message after 50 years is still unresolved,” remarks Samuel Egerton, who donated the poster to the Smithsonian after carrying it in protest during the 1963 March on Washington”(Collection of the Smithsonian National Museum of African American History and Culture, gift of Samuel Y. Edgerton).

Following the killing of George Floyd in Minneapolis late last month, there have been global and national protests against police brutality. The catalog of protest art about police brutality and other issues is not short on content, and has been the subject of more than a few exhibitions over at least the past 50 years.

As we commemorate Juneteenth, the day that marked The Emancipation Proclamation’s arrival to Texas a full two and a half years after the January 1, 1863 decree, these works emphasize how long the road has been, and how far still we have to go.

My most recent conversation with artists Danielle Demetria East, Robert L. Hodge, David Jeremiah, and Vicki Meek led me to consider some of the works of art I’ve seen over the past few years that deal with the subject of protest and police brutality. Concentrated over the period between 1963 and 2020, and in no sense comprehensive, the following selection is somewhat representative of the spectrum of art created around the subject of police brutality. 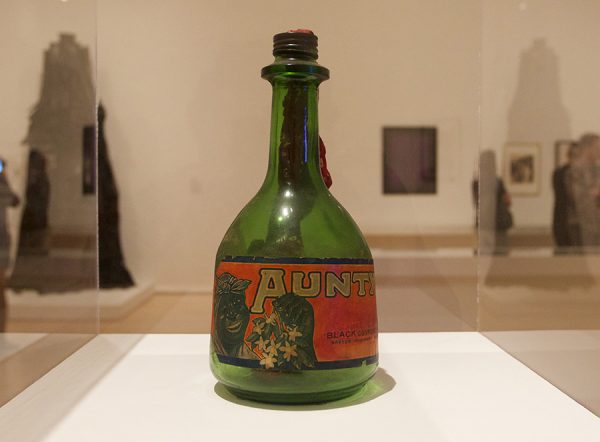 On a road trip from Texas to New York in the summer of 2017, I stumbled onto the exhibition We Wanted a Revolution: Black Radical Women, 1965–85 at the Brooklyn Museum, and this work by Betye Saar titled Liberation of Aunt Jemima: Cocktail, 1973. This was one of a few works by Saar in the show. 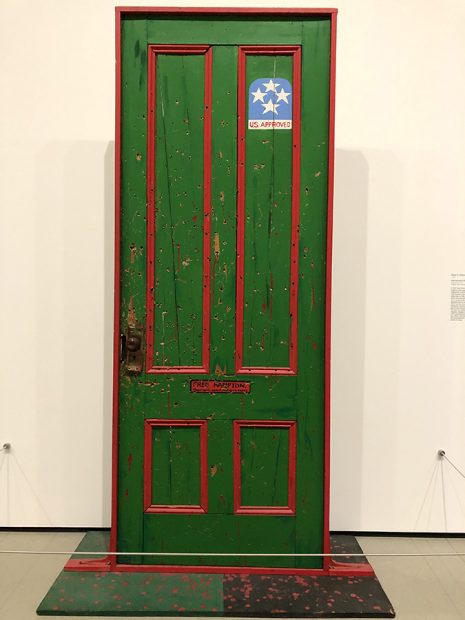 On a similar trip in the opposite direction last summer, I saw Dana Chandler’s Fred Hampton’s Door at The Broad in Los Angeles in the traveling exhibition Soul of a Nation: Art in the Age of Black Power, which incidentally comes to the Museum of Fine Arts, Houston next month. The door, with its red and green paint and bullet holes, references the Chicago police raid which killed Hampton, the then-leader of the Black Panthers.

“After the raid, police used the door, filled with bullet holes, as evidence that Hampton shot first. However, it was eventually proved that all the gunshots came from the police officers. Chandler created a bullet-riddled door to pay homage for Hampton and highlight police brutality.” –A.R. Shaw 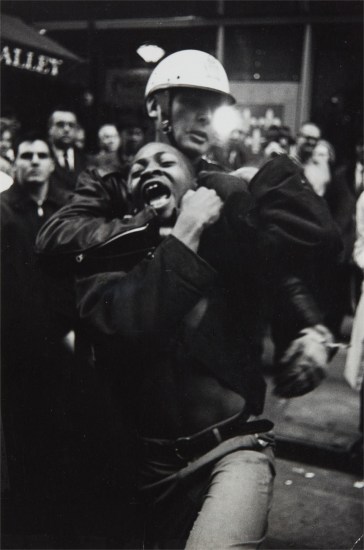 The above is The Arrest of Taylor Washington, Leb’s Restaurant, Atlanta,1963, printed 1967, by Danny Lyon.

Via The Minneapolis Museum of  Art:

“The Civil Rights movement of the 1960s was a widespread effort to end racial segregation and discrimination against African Americans. News coverage of sit-ins and freedom rides dominated the cultural and political landscape of the United States. At this time Danny Lyon was in his early 20s and an undergraduate student at the University of Chicago. After meeting John Lewis, the chairman of the Student Nonviolent Coordinating Committee’s (SNCC’s) in Cairo, Illinois, Lyon then traveled to Mississippi, to cover voter registrations, and soon he was present at almost all of the major SNCC events during the movement. Lyon served as SNCC’s photographer from 1962 to 1964 and later documented his experiences in his book Memories of the Southern Civil Rights Movement.”

The story of the above work by Jean-Michel Basquiat is recounted in a Guggenheim Museum’s online resource from Basquiat’s“Defacement”: The Untold Story, the museum’s exhibition of Basquiat’s work which closed last November:

“The work commemorates the fate of the young, black artist Michael Stewart at the hands of New York City Transit Police after allegedly tagging a wall in an East Village subway station. Originally painted on the wall of Keith Haring’s studio within a week of Stewart’s death, Basquiat’s painting was a deeply personal lamentation that has rarely been exhibited in a public context.” Stewart died on September 28, after 13 days in a coma. He was 25. 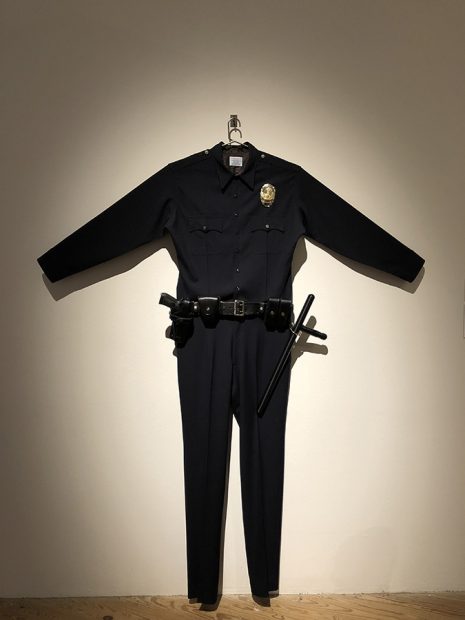 Another work that I was fortunate to see in person is Chris Burden’s L.A.P.D. Uniform, which was part of the Contemporary Art Museum, Houston’s show Walls Turned Sideways: Artists Confront the Justice System, in the fall of 2018.

Uniform, from 1993, was made by Burden in response to the Rodney King beating in 1991, Los Angeles, which was followed by riots and protests. The uniforms, in an edition of 30, were made oversized to fit someone 7 feet 4 inches tall, signifying an authoritative dominance. 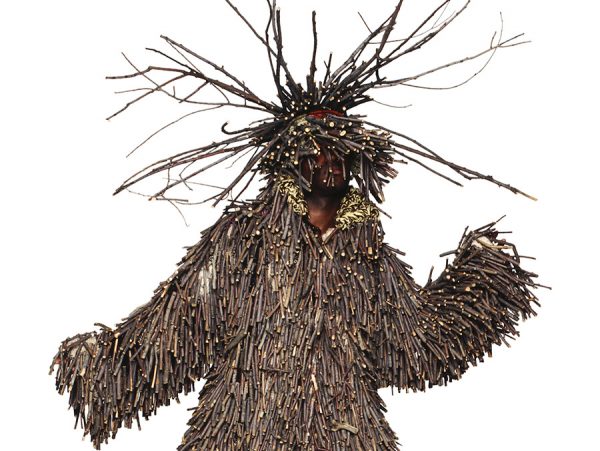 Detail of “Untitled” (2006) by Nick Cave. This is one of several soundsuits Cave made out of twigs.

“During an October 13 conversation with Cave at the University of New Mexico’s Rodey Theatre, Kymberly Pinder said that Cave’s twig soundsuit helped her conceive of the exhibition Necessary Force: Art in the Police State, which she co-curated with Karen Fiss at the UNM Art Museum. Cave said the original impulse to create the twig suit evolved out of the artist’s heightened awareness of what it meant to be a black man in the United States following the Rodney King beating in 1991. The brutal police violence against King, along with Cave’s own experience of being a black student at the mostly white Cranbrook Academy of Art, motivated him to shift the course of his artistic practice.”

Glenn Ligon,“blues,” “bruise,” and “blood.” The work by Glenn Ligon was inspired by a description of police brutality and wrongful conviction.

My road trip to Ferguson, Mo. in July 2017 coincided with Glen Ligon’s Blue Black, a show the artist curated for the Pulitzer Arts Foundation (June 9- October 7, 2017). The show featured works that are blue and black, emphasizing color and form. His own work for the show references a quote from Daniel Hamm, imprisoned as part of the famed “Harlem Six” or “Blood Brothers,” a group of young black men wrongly accused of murder in 1965.

From the Virginia Museum of Fine Arts:

“Hamm and four other members of the group — Wallace Baker, William Craig, Ronald Felder, and Walter Thomas — were eventually exonerated. Robert Rice however remains incarcerated, serving a life sentence. In a statement shared a few days following his release from police custody, Hamm spoke publicly about the brutality he experienced at the hands of prison guards.

“Hamm’s quote is particularly poignant against the current social landscape in which incidents of police violence against and wrongful incarcerations of young African American men have continued to rise.” 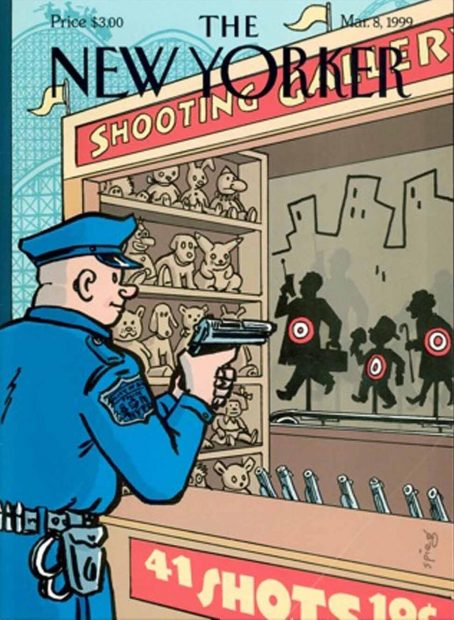 Art Spiegelman’s March 8, 1999 cover art for The New Yorker references the killing of Amadou Diallo. An American Journalism Review article about the cover reads in part:

“The March 8 cartoon cover, drawn by Art Spiegelman, elicited outrage from New York police and a protest by about 200 off-duty police officers in front of the magazine’s headquarters… . The cover, which pictures an NYPD officer aiming at human cut-outs at a carnival shooting gallery, was prompted by the February 4 killing of Amadou Diallo in his apartment building by four officers. They fired 41 shots, hitting Diallo with 19 of them.” 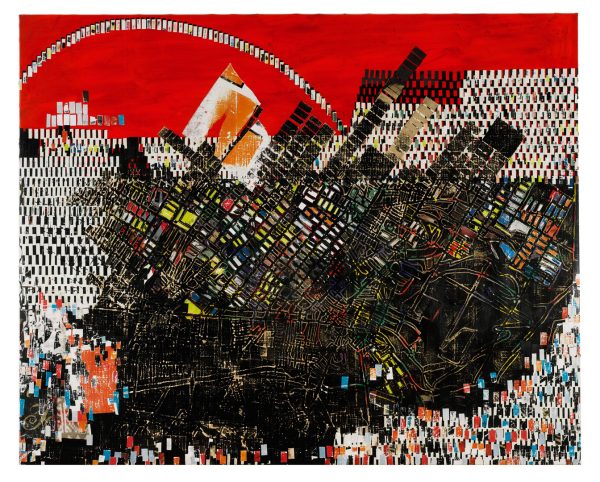 Also seen at The Broad on a Los Angeles road trip was Mark Bradford’s Scorched Earth. Writing about the work, which references Tulsa’s “Black Wall Street,” burned down during the Tulsa Massacre, The Broad’s accompanying text reads:

“The layers in Scorched Earth create a topography that represents the deep psychological and physical ruins of a disappeared people and another time and place. In this work, Mark Bradford depicts an aerial map of an area that has been blacked out. The blackness of this land mass resonates on many levels: black as in the demographics of this neighborhood in Tulsa, Oklahoma, at one time called ‘Negro Wall Street,’ where many black-owned businesses thrived, until a race riot erupted in 1921 and the violence obliterated this unique area and its history; black, as the title suggests, meaning burnt or scorched; black as in redacted; and black as in nothingness.” 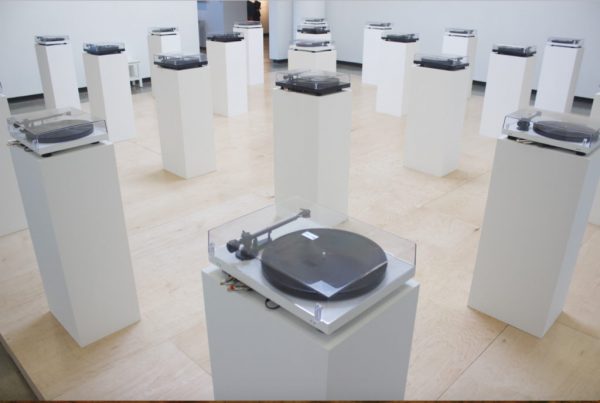 Above is American Monument, by artist lauren woods. A Hyperallergic story describes the work:

“American MONUMENT [is] a multi-media installation addressing police brutality and the killing of African Americans by police officers. The centerpiece of the monument (woods is adamant that it not be referred to as an exhibition) consists of a grid of 25 record players, each holding a record related to one of these deaths: Sandra Bland, Alton Sterling, Mike Brown, Philando Castile, Eric Garner, and several others. The audio on these records is gathered from police reports, court transcripts, and bystander recordings. Flanking this central piece are 25 boxes of documents related to the cases, as well as blown-up transcripts of testimony by George Zimmerman, who shot and killed Trayvon Martin, and Darren Wilson, the police officer responsible for Brown’s death.”

woods shut down the monument after the museum director Kimberli Meyer was fired from her position just as the show was scheduled to open. Read the full story here. 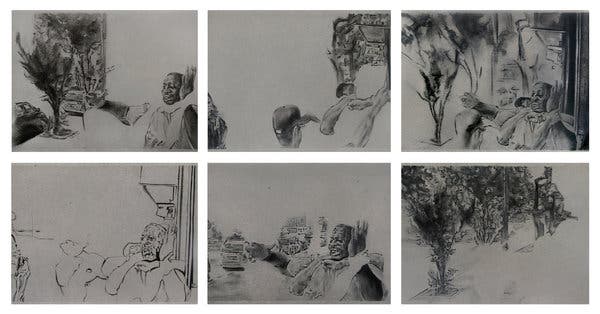 In a similar situation earlier this month, artist Shaun Leonardo’s exhibition The Breath of Empty Space was canceled by the Museum of Contemporary Art Cleveland. Leonardo’s piece Eric Garner from 2015 (drawings 1-6) was to be part of the exhibition.

A statement from the museum, in a story about the cancellation from a New York Times article, reads in part: “The museum canceled the exhibition, organized by the independent curator John Chaich, in March after local black activists and some of the museum’s staff members objected to it. The museum shared a statement with the artist that said that ‘troubling community response’ made the institution realize that ‘we were not prepared to engage with the lived experiences of pain and trauma that the work evokes.'” 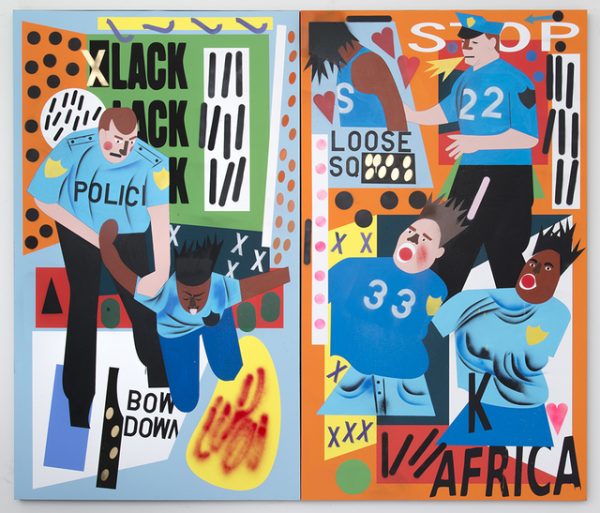 I saw this work by Nina Chanel Abney at the Modern Art Museum of Fort Worth’s Focus exhibition of her work in the spring of 2018. The work, titled What, 2015 is described in an excerpt from the Modern’s text:

“In the Always a Winner series, which addresses the Black Lives Matter movement, police batons are phallic symbols and clown makeup suggests racial distinctions. The series reflects the absurdity and information overload of the internet era and questions the ways in which people are affected by abuses of power.” 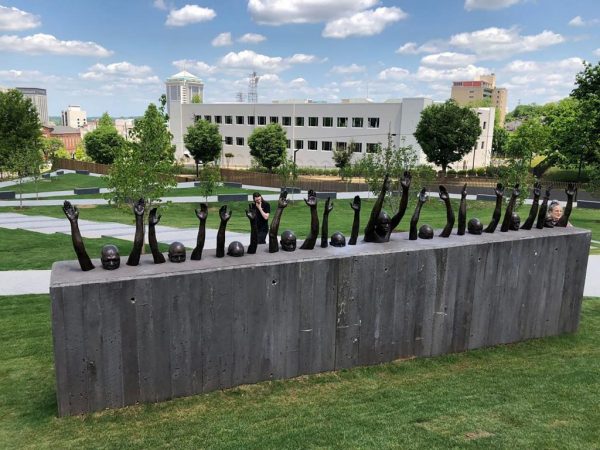 This final piece, the work of Hank Willis Thomas, is Raise Up, from 2016. Bronze.