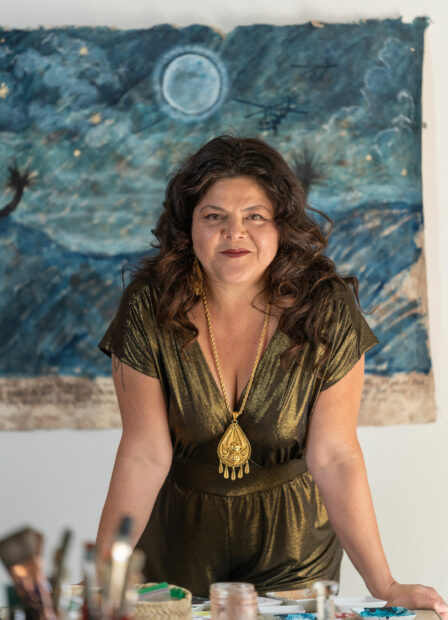 Sandy Rodriguez is a Los Angeles-based painter who was raised on the California/Mexico border. Her work investigates the methods and materials of painting across cultures and histories. While she has exhibited at notable institutions, such as the Museum of Contemporary Art, San Diego, Sandy Rodriguez in Isolation, which opens December 18th at the Amon Carter Museum of American Art, is her first solo museum show in Texas.

Ms. Rodriguez herself is no stranger to museums — from 1998 to 2016 she held various art education positions at institutions like the Museum of Contemporary Art, Los Angeles and the J. Paul Getty Museum. Her roots in art education are evident in this exhibition, which includes a display of the artist’s pigments and materials, as well as a large-scale didactic installation centered on plants. The piece lists the plants’ names in various languages, notes their medicinal uses, and also contains dried plant specimens. 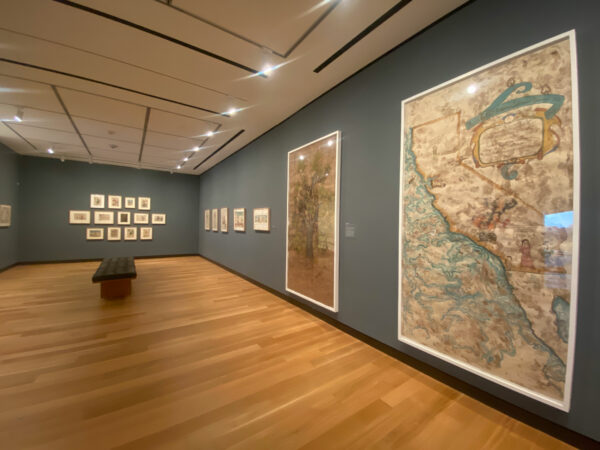 The thirty-six paintings on display at the Carter were created during the spring of 2020 when Ms. Rodriguez began a residency as the inaugural Alma Ruiz Fellow at the Joshua Tree Highlands Artist Residency. Though the artist was secluded in the desert, the news of the rising COVID fatalities and nationwide demonstrations against police brutality infiltrated her space. Ms. Rodriguez drew inspiration from the long lineage of artists who have documented and reacted to conflicts and pandemics in their work. Maggie Adler, Curator of Paintings, Sculpture, and Works on Paper at the Carter told Glasstire, “This work is seductive because it looks like you’re looking at landscapes or botanical studies, but the meaning is so rich with interpretation and it speaks to our moment and the traumas of our moment. There’s an easy entry point to it but the work is complex.”

Nocturne for Robert Fuller and Malcolm Harsch is a perfect example of how Ms. Rodriguez’s work lulls you in but presents a complex narrative. At first glance, you may be drawn in by the monochromatic landscape featuring silhouettes of iconic Joshua trees, or you might notice the natural inconsistency of pigmentation in the piece’s handmade paper. As you look closer, you begin to see helicopters in the night sky, their cockpits depicted as skulls. Ms. Rodriguez refers to these as “calavera copters,” and they appear in works from her other series. As you lean in closer to read the text at the bottom of the painting, you find that the artist is documenting an incident in which two Black men, Robert Fuller and Malcolm Harsch, were found hanged ten days and 50 miles apart in Southern California.

In a statement, the museum’s Executive Director, Andrew J. Walker, said, “In line with the Carter’s mission of bridging historical and contemporary narratives in American art, Rodriguez unites the past and the present, both through her subject matter and material usage, in a new body of work that is prescient and timeless.” In a conversation with Glasstire, Ms. Adler discussed the connectivity between Ms. Rodriguez’s work and the Carter’s collection, and how the artist’s work brings out new ideas from the museum’s holdings. Adler noted that the Carter has a long history of collecting works related to National Parks, like Albert Bierstadt’s Sunrise, Yosemite Valley, but that she was also motivated to work with Ms. Rodriguez because, for several years, the museum has been interested in re-examining the concept of “the West.” This includes a conscious effort by the museum to go beyond the works of Fredric Remington and Charles Russell, two artists who were central to the institution’s early mission and collection.

One element of the museum’s reexamination of “the West” involves broadening the institution’s holdings of work that discusses the region. A piece by Ms. Rodriguez, You will not be forgotten, Mapa for the children killed in custody of US Customs and Border Protection, acquired by the museum in 2020, is part of this effort. This piece is not included in Carter’s current show, as it is on loan to the Los Angeles County Museum of Art for their exhibition Mixpantli: Contemporary Echoes.

Sandy Rodriguez in Isolation will be on view from December 18, 2021 through April 17, 2022 at the Amon Carter Museum of American Art in Fort Worth.