“Ellsworth Kelly: Postcards” at the Blanton Museum of Art, Austin 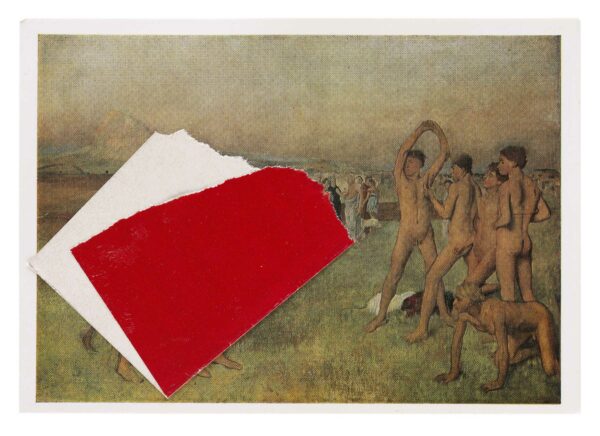 Postcards are about people and places.

This should come as no surprise to anyone who has ever sent or received a postcard. Historians estimate that in the first two decades of the twentieth century, something like 200 billion postcards were in circulation around the globe – postcards were the world’s first social network. More than a century after their heyday, today postcards are artifacts that show how images and text were used to create short, simple communications that existed en masse. Postcards were – and still are – a way of creating connections between senders and recipients, spanning both time and geography.

It’s easy for individuals to become lost in the churn of a media that history measures by the hundreds of billions. Subsets of postcards, carefully curated, thoughtfully collected, can expand our thinking of these objects, their life histories, and the context that surrounds how and why they were created. The new exhibition at the Blanton Museum of Art, Ellsworth Kelly: Postcards, is just such a collection, comprised of roughly 150 postcards in total.

Although twentieth-century artist Ellsworth Kelly is best known for his work with paintings, sculptures, and prints, these postcards – themselves a rarely seen aspect of his art practice – offer a fascinating, complex media that expands how we can think about Kelly’s overall work with shape, color, and abstraction. Put simply, Kelly’s postcards are collages. Commercial, readily available, archetypical, and tourist-y postcards serve as the initial base for each collage; from there, Kelly pastes images or parts of images, torn from other media, into the predetermined, predictable image from each postcard. Some of the collages highlight famous celebrities; some explore shape and texture; others offer ways to see how Kelly was playing with space. 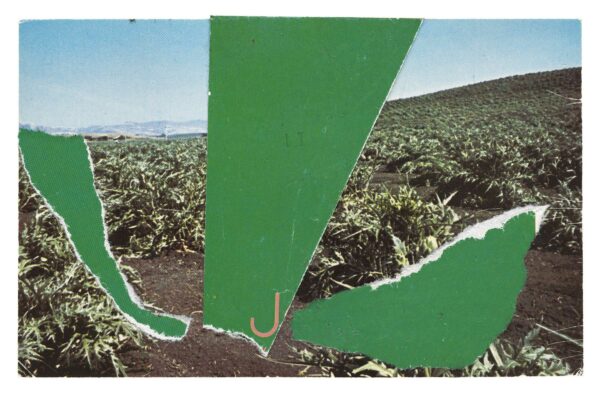 Postcards are participatory media. People must create a postcard’s picture image, create or print postcards en masse, and buy and sell them, to say nothing of the social infrastructure required to send and receive postcards around the world.. Postcards also offer a very scripted space. On the front, there is an image for the viewer to consume and to connect with a place; the back of a postcard has several blank spaces in anticipation of a message and a recipient. There might be thousands of the same postcard featuring a specific image of the beach at Saint Martin, for example, but the sender, recipient, and message on a postcard means that each one can be triangulated to a specific time, place, and person. In order for a postcard to be a postcard, it needs that participation.

In Ellsworth Kelly: Postcards, postcards become a participatory media twice over. Once when the artist created each collage – upending expectations about the image and space on the front of the postcard. And twice when Kelly put the postcard in the mail or in his own archives to be circulated later. As such, it is striking that each postcard is both scripted and unexpected – dynamic and static.

Over fifty years in his career, Kelly made something like four hundred of these collages, although they were not created with the express intent of being exhibited. Most were held privately by the artist – Kelly was a great archivist of his own work, and only something like twenty percent of the total postcard collages were ever sent in the mail. And, only some of these postcard collages would make their way to larger institutional collections.

In his earlier years, Kelly sent the postcards as correspondence, and then started keeping them for himself; in the mid-1980s he began sending them again. (Monocle Radio has an interview about the postcards, featuring Ian Berry and Jessica Eisthenthal, who curated the exhibition, along with the Blanton’s curator, Carter Foster.) 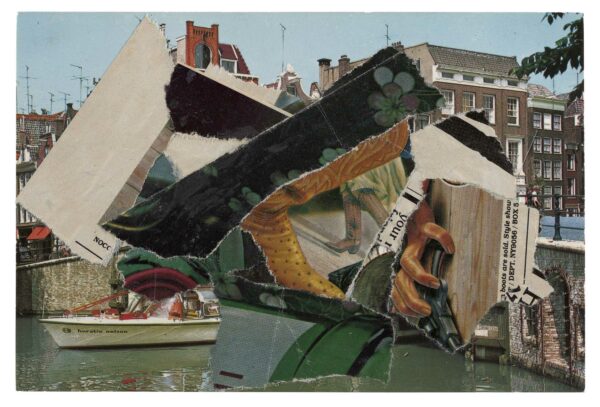 Ellsworth Kelly: Postcards explores four themes, according to a chronology of the artist’s life: Visual Play and the Framing Edge, 1954-61; Accidental Dimension and Chromatic Complexity, 1964-75; Seeking Essences of Form and Experience, 1975-80; and Materials and Monuments, 1984-94. The exhibition is comprehensive in its survey of Kelly’s collection, including a postcard of his first monochrome painting from 1949, as well as his final collages of ocean waves at Saint Martin. 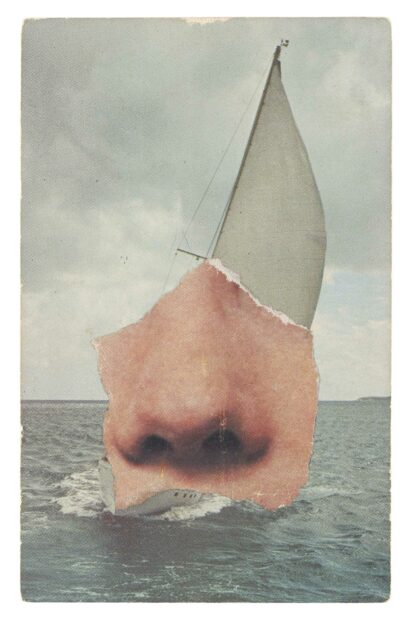 The postcards that Kelly uses as the basis for his collages range from travel picture postcards – that feature classic postcard staples like sun-drenched beaches and awe-inspiring monuments – to museum postcards that depict classic works that have art historical significance. Perhaps the most interesting postcard collages are those that feature the same picture postcard with a different collage each time the postcard is used. For example, Kelly might use the same starting postcard, but how he imagines and reimagines the color, space, and texture on top of it is as singular as the moment the postcard collage represents.

Postcards are as playful and as complicated as we want them to be. They are a media that requires our active contribution – we interact with them and by doing so tie ourselves to a particular time, place, and text. Ellsworth Kelly: Postcards shows us how postcards can challenge and shape our understanding of this sense of participatory media.

Ellsworth Kelly: Postcards is on view at the Blanton Museum of Art through November 27, 2022.