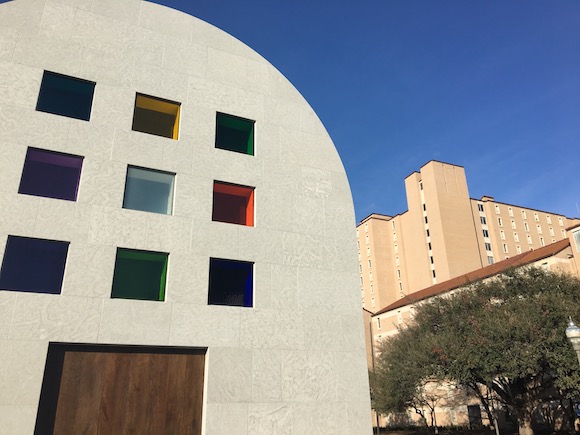 Seventy-six works of art by Ellsworth Kelly have been gifted to the Blanton Museum of Art at The University of Texas at Austin. Sixty-seven of the works are gifts from Ellsworth Kelly and Jack Shear; the remaining works come from Douglas S. Cramer, Jan and Howard Hendler, Jeanne and Michael Klein, and David G. Booth.

Since opening in 2018 on the UT Austin campus, Kelly’s freestanding Austin is a major art destination, attracting more than 171,000 people in its first year.

Amongst the new works gifted to the museum are paintings, drawings, sculptures and prints spanning Kelly’s career. Especially significant is the architectural model of the Austin project’s original design from 1986.

The Blanton has launched an eight-part video series that traces the development and evolution of the Austin project. The museum will also host a series of talks on Kelly’s practice. The next two are:

Kelly and Shadows: Friday, September 13 at noon. Roberta Bernstein, art historian, will explore how the contrasts of light and shadow in Ellsworth Kelly’s photographs relate to shapes used in his paintings and sculptures.

Kelly & Stamps: Friday, November 8 atnoon. The Blanton’s Veronica Roberts will speak in conversation with Derry Noyes, Artistic Director for the United States Postal Service about her design of the 2019 Ellsworth Kelly stamps and thirty years of experience designing art stamps