Art History and the Smart, Hard Truth About Our Cats and Dogs 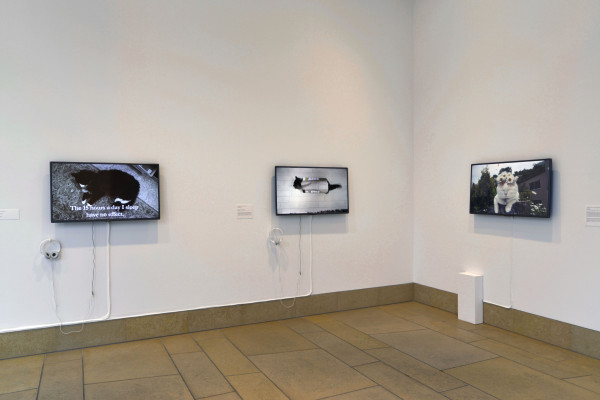 The French and Japanese cat videos at the exit

Before I typed up this piece on the Cats and Dogs show at the Blanton, I read the Glasstire roundup of Austin art shows by contributor R.J. Harrington. His piece started and ended well enough, and I was impressed by his consistent demand for rigor in the face of shows and artists who may lack it. He seems bent on rigor. Which is why his little capsule response to the Cats and Dogs show, buried in the middle of his piece, jarred me. “Stupid Show Makes Me Stoopidier” reads his subheading.

I don’t know what he expected from the Blanton or what kind of mood he was in when he saw the exhibition. But I know that “In the Company of Cats and Dogs” is a rigorous show. I think the Blanton had its work cut out for it before it even called in the first loan; it’s a summer exhibition that therefore implies a broad and general appeal, yes, but it’s also an academic show necessitating a high degree of research and organizational discipline and strong work by some heavyweights to counteract the idea that the theme is slight.

The Blanton has achieved this. The show’s structure and tone is impressive. So is the work. If a museum-goer is dead to the aesthetic or formal or intellectual seductions of Otto Dix, Henri Cartier-Bresson, Albrecht Dürer and William Hogarth then I can’t help him. Whether you like our four-legged partners in civilization or not it seems a shame to blithely dismiss the riches of art history here in the middle of a soupy Austin summer. 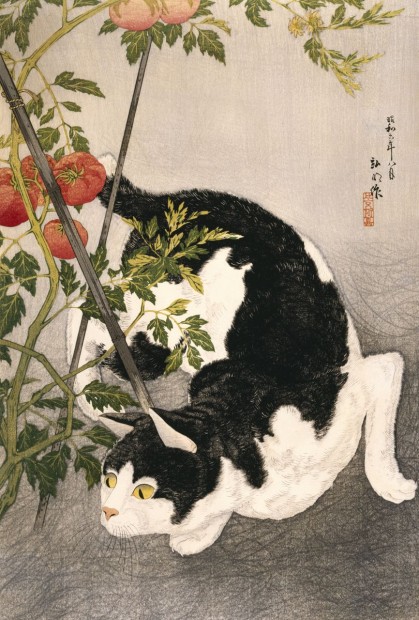 This is not a cloying or sentimental show. Despite its theme and the metric ton of children running around the exhibition when I walked through, I saw little to engage the warm fuzzies that often infects the modern pet owner’s brain. In fact, most of the younger kids and their distracted parents seemed to blow through the show like water over a broken dam, because most of the works are intimate, difficult, and don’t play into our contemporary addiction to cuteness overload. (There is, in the lobby at the end of the show three monitors playing French and Japanese cat videos, but that’s the only concession to cheezburger demands.) Teenagers and college-age people and lone adults were taking it in, though. If anything, this show makes abundantly clear that the long history of civilization’s relationship to dogs and cats is troubled, mutually exploitative, purely functional (if not dysfunctional), and ambivalent.

The show is organized into themes (and to some degree and by default also a bit by eras, since mankind’s view of animals and depictions of them shifted with the times), and when I read the intro text that prefaces this compartmentalizing, I dreaded it. But threading a narrow subject through three thousand years of art history requires some deft maneuvering, and categorizing themes is one way to do it (the Tate Way, I call it). Sometimes the themes felt overly super-imposed, but more often they felt intuitive and right. The Blanton did a bang-up job on its wall text (the dreaded wall text), which was a godsend because the scope of this deceptively compact show is vast. Without the infrastructure the show would be a rangy but interesting mess. 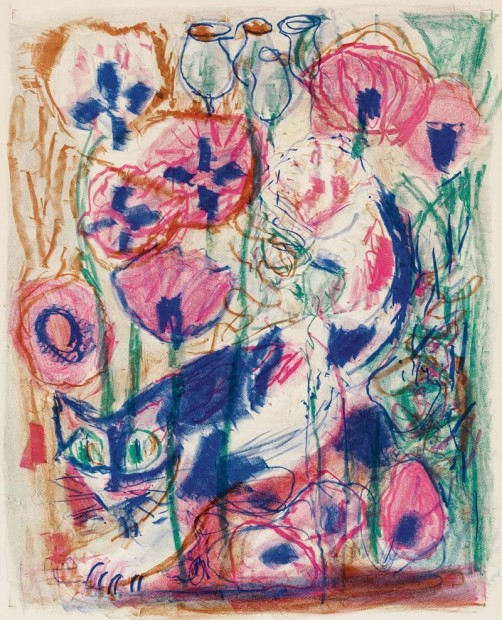 The show starts with piece of Egyptian sarcophagus limestone from around 1295 BCE, etched with the figure of Anubis, the familiar desert-dog headed man, and ends with the aforementioned Maru, the internet-famous Youtube cat from 2012. In between all this the exhibition’s artists grapple, for centuries, with notions and depictions of the dogs and cats who work for us, their place in literature, our shifting morality around them, our mutual abandonment, aggression, and so on. There was a depressing and resilient association with death, sin, and superstition around these two species, and it lasts all the way up to the Enlightenment. This is not a “fun” show. Even the great Dix’s colorful and playful-looking marks denoting a cat on the prowl turns out to be a product of his shaky hand and shaken confidence after he had a stroke. It’s terribly sad.

There are, of course, glossy oil portraits of hunting dogs from the 17th through 19th centuries, small and stunning European etchings and canvases of animal-laden myths and religious texts from the 1400-1700s, lithe and charming Japanese woodblock prints from the last century (of cats of course, and these are what I coveted most), and 18th-century portraits of noblewomen and girls with their lapdogs. These little purebreds are understood to be as much props of prestige as the sitters’ clothes and jewelry, which reminds me that some things haven’t changed much. But time is fluid here. Early in the show, near the artifacts, Louise Bourgeois weighs in with a drawing of herself as a cat version of Saint Sebastian and Jacob Lawrence shows us how dogs were used to curry tips in bars. I liked the time shifts. It kept me on my toes. 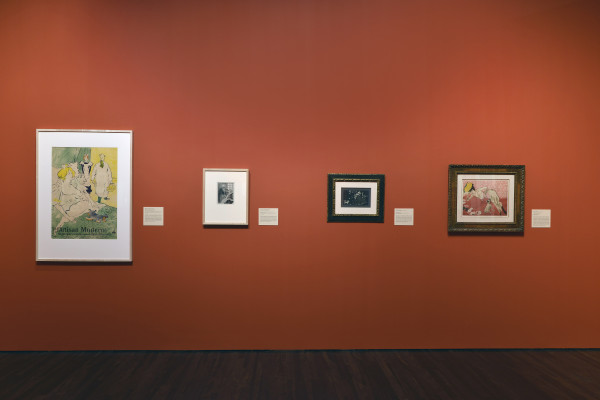 Installation shot from the Morality room; the Jacques Villon is on the right

A particularly charged room titled “Morality” explores our empathy and lack thereof, evolving ideas about animal consciousness, and comparisons between human and animal behavior. Hogarth’s wisdom and despair is on full display in his etching from 1697 titled “The First Stage of Cruelty,” depicting men in a town square gleefully inventing novel ways to torture and kill cats and dogs. But in the same room is a languid, delightfully seedy and very Parisian aquatint by Jacques Villon from 1903 depicting a half-naked prostitute playing a game of solitaire on her bed with her dog looking on.

There are unexpected gems like this throughout. Did you know Dieter Roth was obsessed with making dog-related works in the 1970s and produced more than 3,000 of them? There’s one here: his aggressive self-portrait sketch as a two-headed dog going after a cat woman. Pablo Picasso made a weird little woolly fabric homage to Gertrude Stein’s dog and gifted it to her after his dog fought with hers. There’s a stunning Western Jin dynasty granary jar from around 265 CE ringed by tiny glazed dog guardians. About halfway through the exhibition is a Cartier-Bresson photograph from 1946 of Igor Stravinsky looking far more mischievous and self-satisfied than the black cat he’s cradling.

Really, the exhibition is an art historian’s dream summer show (it is a crying shame the Blanton didn’t spring for a catalog), as well as a cultural anthropologist’s, a zoologist’s, a psychiatrist’s, a theologian’s. And mine.