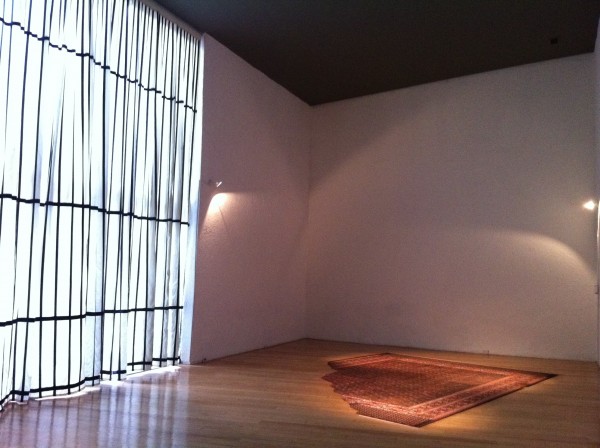 I had the incredible pleasure of visiting the studio of artist Pablo Vargas-Lugo a little more than one week ago.  Pablo’s studio is temporarily nestled in a corner of the Museo El Eco, in the San Rafael neighborhood of Mexico City, just south of the downtown historic district.  The Museum El Eco is also the current site of Pablo’s most recent installation titled Intemperie1, a large Turkmenian rug that sits in the middle of the El Eco’s bottom floor gallery space.  From one corner the carpet looks as if has already been unraveled, as if someone came along and pulled a thread from the precious item and begun the quick process of its deterioration.  However, the closer and closer one gets to the piece, it becomes more apparent that the carpet is actually not woven, but instead made from layers of colored sand laid together with an incredible amount of technical precision.

I’m not new to Pablo’s precision, but it continues to baffle me every time I see his work or his process.  In 2009, I was on the production team for Pablo’s Eclipses for Austin at the Blanton Museum of Art for the former WorkSpace series, in partnership with the UT football stadium (see some images of the action here on Flickr, or visit the projects Facebook page) .  With the help of more than 150 volunteers who generously sat in the sun for more than four hours, we flipped plastic placards in sync with a drum and the artist counting the time to produce a replica of eclipses that will be visible in Texas in the next millennium.  Long story short, it was my first introduction to Pablo’s methodical process and his hyper–conceptual work that is also beautiful, poetic, and wrapped up in his love of patterns and “how things fit together.”2 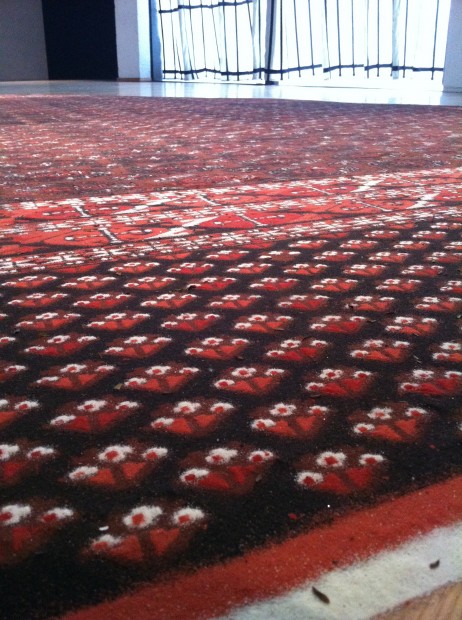 For Intemperie, Pablo’s precision, conceptual framework, and poetic visual voice once again combined in a perfect trifecta to make an incredible work of art.

Aside from the rug itself, a second part of the installation involved the removal of a large set of windows that had been designed by El Eco architect Mathias Goeritz.  In their absence, Pablo designed a set of large curtains that mimic the cross-hatching casement of the metal pier and beam architecture itself, but instead billow into the gallery as the wind from the street sweeps into the courtyard and catches in the curtain’s heavy fabric. 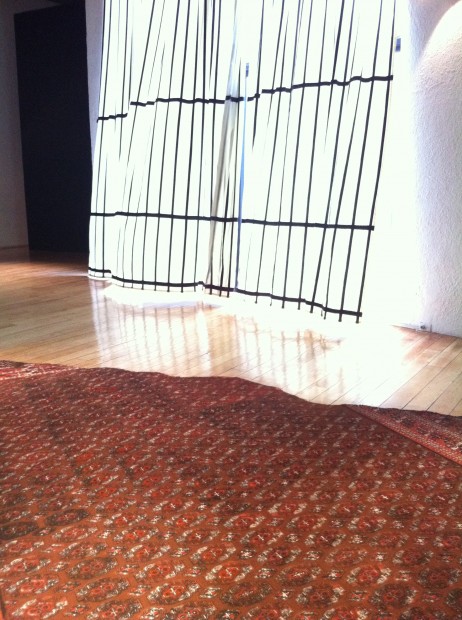 Intemperie, detail of curtain and rug

It’s easy to get completely lost meditating in the small waves of the fabric as the curtain sweeps in and out of the gallery space.  It’s easy to become mesmerized by the layers of color, shapes and form in the rug itself., especially as they are subtly swept away, mixing into each other quietly.   The objects just as they are offer a beautiful moment of introspection as the elements of nature sweep under the thick curtain and slowly erode at the delicate carpet of sand lying on the floor.  Come to find out, this is exactly the artist’s intent.

When we began to talk about the piece I learned that Pablo was very interested in the dichotomies involved within these precious Turkmenian rugs historically.  To my surprise Pablo began to tell me histories of how these rugs were not meant to be used as decorative objects, but rather functional ones, meant to protect their users from the physical elements of the desert.  They were used as clean spots to serve meals, they were used as temporary roofs at night for nomadic lifestyles, and they were used to provide covering in the harsh central Asian climate.  In contemporary society we are used to seeing these rugs decorate lavish homes, and that’s exactly where the interest lies for the artist. 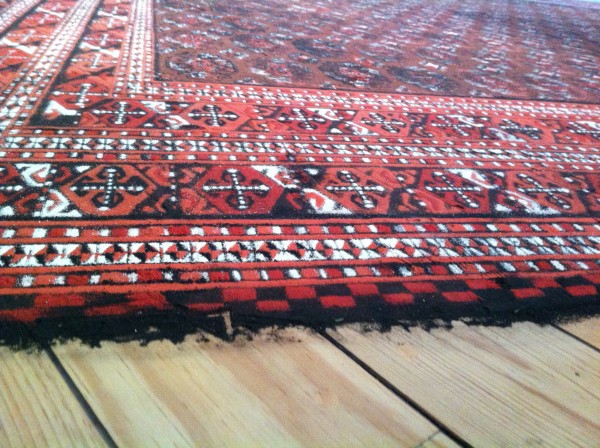 Intemperie, detail of rug slowly being blown away by the wind

In our conversation, Pablo expressed that he was interested in the slow, natural erosion of the rug, just as its functionality has slowly been eroded over time to change its practical and functional properties into fine décor for bourgeois homes.  Indeed it seems irreverent that the wind is allowed to blow in, tainting the perfection of the carpet, even damaging it, but this precisely the piece.  Once lain on the floor for the objectification and veneration of the eye, it is swept up into its impermanence and its dysfunctionability3, eroding as both an art piece and object.

I could sit and watch it all day.

1. Literally translates as: out in the open or outdoors

2. Words from the artist himself

3. Yes I just turned that into a word.  Pardon my Spanishism