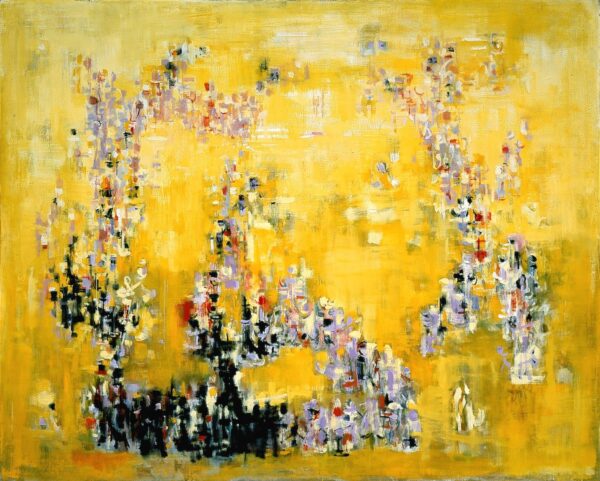 American artist Alma Thomas’s acrylic painting, Jonquils (1973), is a yellow and gold field of daffodils that fit like puzzle pieces across the canvas. It’s a powerful work that exemplifies many of the themes of light and color characteristic of abstract painters in the mid- to late-20th century.

Although artists began exploring abstract and nonrepresentational forms early on in the 20th century, the ensuing decades saw them push boundaries between media, explore new mediums (including acrylic paint), and consider that the action or gesture of creating a piece was just as much part of the work as was the material it was made of. If anything, these new directions emphasized that 20th-century art was not a static entity, either in its creation or in the emotion that it invoked in its viewers. It was ever-moving and ever-changing: ever-expanding. 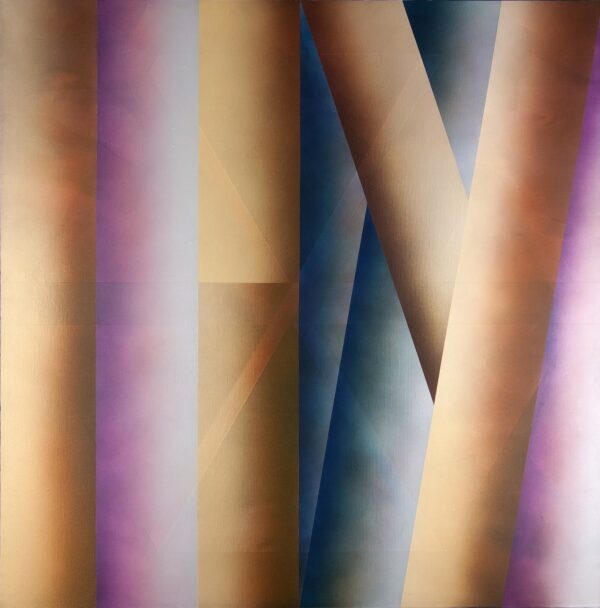 It’s the element of dynamic extension — in subject and in work — that thematically run through the 46 works that comprise Expanding Abstraction: Pushing the Boundaries of Painting in the Americas, 1958-1983 currently on view at the Blanton Museum of Art at UT Austin. “A world without color would seem dead,” Thomas is quoted in the exhibition. “Color is life. Light is the mother of color. Light reveals to us the spirit and living soul of the world through color.” 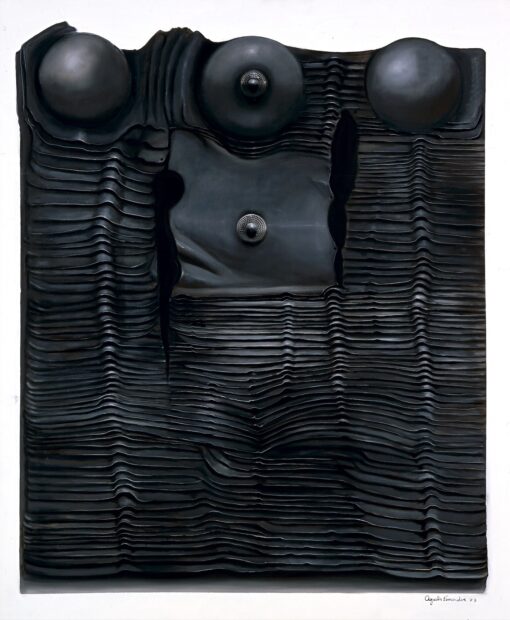 Forty-three of the works in Expanding Abstraction are from the Blanton’s permanent collection, and three are on loan (including Jonquils), with an emphasis on large-scale works that are rarely on view. Although elements of dynamic abstraction can be found around the world from a number of different artistic schools and communities, this show focuses on works from a diverse set of artists in the United States, Latin America, and Brazil. Works by Sam Gillam, Alma Thomas, George Sugarman, Dorothy Hood, Norman Lewis, Gyula Kosice, and Richard Anuszkiewicz (to name a few) illustrate the many ways that artists in the mid-20th-century Americas experimented with light, color, and materiality. 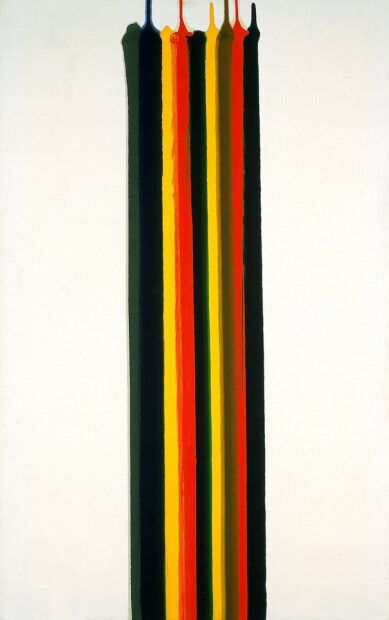 For centuries in art, “paint” meant oil paint. What’s more, it meant “paint applied to surfaces with traditional tools in traditional ways.” By the mid-20th century, acrylic paint became the first alternative to oils; artists found that acrylic dried much faster and more uniformly than oil paint and was less expensive than its traditional counterpart. Working with acrylic paints on large surfaces offered new perspectives both literally and figuratively. Instead of working on a vertical canvas, artists could — and did — lay flat, bend, and lean their working surfaces. Thus “pouring, staining, or dripping paint allowed artists to use gravity and chance as tools to create form,” the exhibition literature states. Two examples from the exhibition include Morris Louis’s Water-Shot (1961) and Dorothy Hood’s Space Bolts V (1967.) 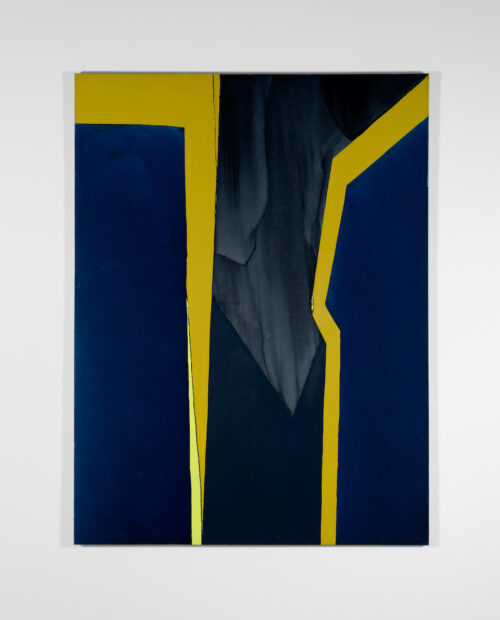 And introduction of acrylic paint challenged notions of “flatness” in perspective, particularly as mid-20th century artists explored new tools with which to apply it. (“Some artists … explored spraying paint using industrial tools like air guns.”) But “flatness” was also challenged as works began to bridge traditionally observed boundaries between painting and sculpture.   Most if not all of the works here offer myriad non-traditional (and some even non-canvas) textures to create new dimensionalities. 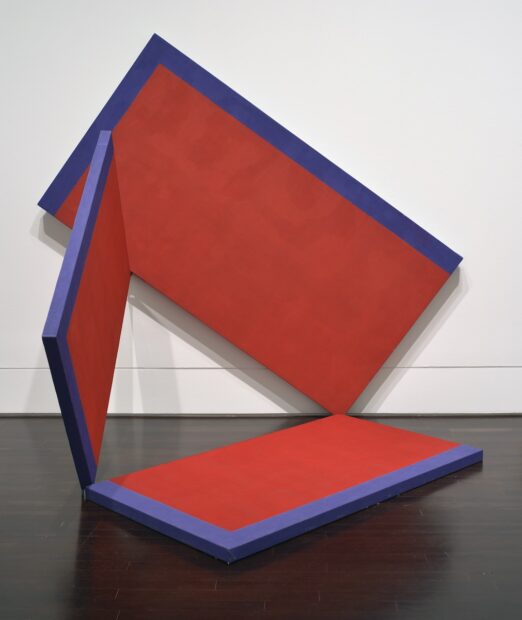 Works like Alejandro Puente’s Estructura [Structure] (3 panels) (1966) and George Sugarman’s pedestal-free Two in One (1966) show how composition and color can ensure that a painting can also be experienced as a sculpture. Push the question of paint and space one step farther, and artists like Jamie Davidovich began to draw, as it were, from non-art materials. His Tape Project, Akron Art Institute (1976/2020) eliminates the expected boundedness of a work by removing a traditional frame; the installation is comprised of clear tape and highlights the wall it’s hung on as a space for exploring the physicality of institutions that support and exhibit art.

The works in Expanding Abstraction exemplify what art critic Harold Rosenberg described as the mid-20th century’s abstract expressionism: “an arena in which to act.” (Rosenberg termed it “Action Painting” in 1952.) For materials that challenge traditional notions of exhibition (like Davidovich’s tape), the creation of the piece is part of that arena. 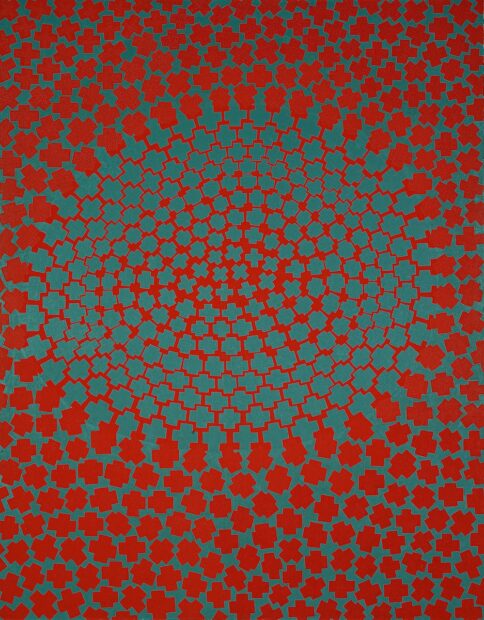 That dynamism isn’t limited to the creation of the pieces. Understanding that each piece is active — moving, changing, expanding — is exemplified by the paintings that explore optical illusion. Richard Anuszkiewicz’s Plus Reversed (1960) and Tadasky’s (Tadasuke Kuwayama) C-109 (1964) notably visually “shift” depending on where one stands to view them. And as acrylic paint can produce very specific and crisp lines, it was ideally suited for the sorts of interlocking graphics required to create these moving optical illusions, known as the moiré effect. (Oil paints can deliver this as well.) And the motor, light, plexiglass, and water of Gyula Kosice’s Hidroluz (Hydrolight) (1975) push illuminated little bubbles up the wooden box. Here, the movement is literal.

What’s evident throughout this nuanced and thoughtful show is just how much artists in the Americas found new ways to explore and expand on notions of light, color, and materiality during this time. It’s a welcome feast for the eyes.