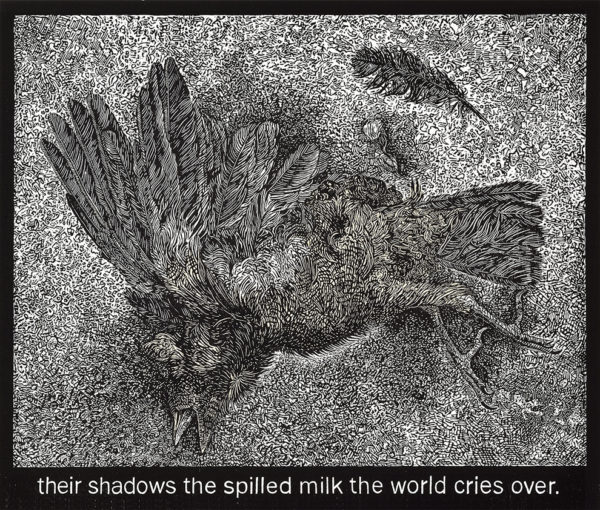 Most marriages between visual art and poetry fail. One will overpower the other, making both look weak. Or, worse, they will appear too closely linked, sinking into didacticism and literal-mindedness, patronizingly illustrating the other’s failings.

One or the other is reduced to a mere prop, revealing the flimsiness of the whole enterprise. The reason for these failures usually comes down to a lack of imagination. It’s generally best to keep these two arts separate, to let them get on with the business of using abstraction to express something — about truth or beauty or ugliness or authenticity or nature or artifice or whatever it is — without getting muddled up in each other’s methods.

It’s quite rare when a marriage between visual art and poetry leads to something uniquely greater than the two distinct parts. But one such example is Alice Leora Briggs’ series of 12 woodcut prints, on view at the Louise Hopkins Underwood Center for the Arts in Lubbock, and executed in 2016. Each correspond to a line of the poem The Room by Mark Strand. 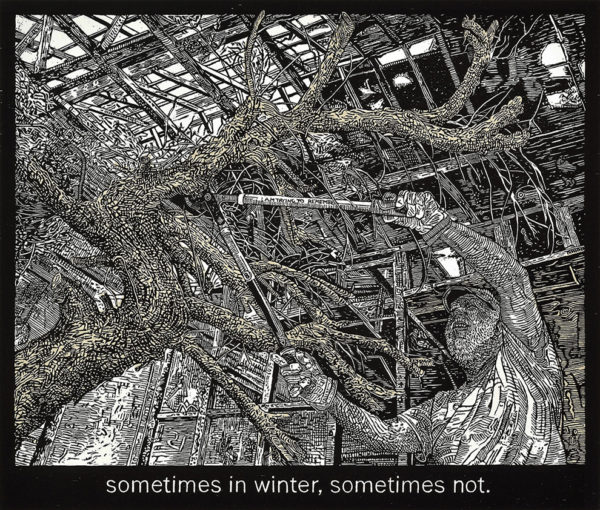 This was a not a marriage that flourished overnight, though. It needed work. In the gallery text, Briggs details the difficulties she experienced in her attempts to make work that responded to Strand’s words:

“Beginning in 1993, I corresponded off and on with U.S. Poet Laureate Mark Strand. I always felt I was on the verge of creating images that could stand beside his words. After three failed attempts, this notion became a standing joke that I told only to myself. I once wrote to Mark that I did not understand his poems, but could not stay away from them. He replied that this was reasonable, “that love comes first, then understanding.” Several decades later, I turned my back for a moment and one of Strand’s poems bled into my work. THE ROOM became my geography.”

In viewing Briggs’ suite of images, this process becomes clear, not because the images and the text are inextricably linked, but because they are not. Tellingly, she “turned [her] back for a moment” — it seems the work came to her on an unconscious level. The intimate understanding that resulted between Briggs’ and Strand’s works is something that the viewer won’t grasp on an intellectual, surface level. It’s deeper and mysterious and intuitive, like love is. 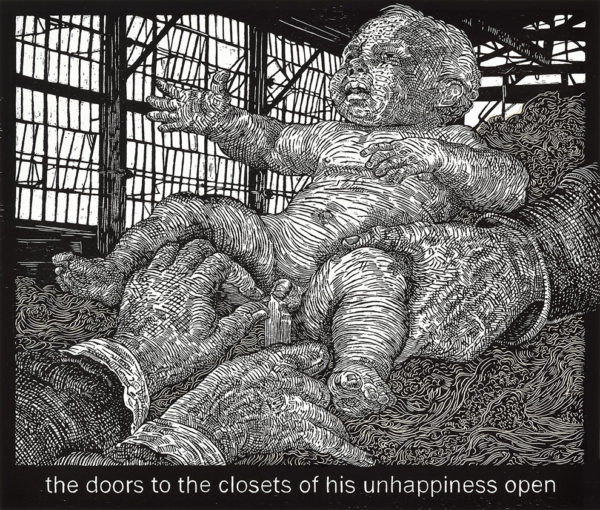 Briggs’ woodcuts bear a closer relationship to the detailed cross hatching and crowded compositions of Albrecht Dürer than they do the sparer style of José Guadalupe Posada, but she certainly shares a macabre sensibility with the latter as well. The images are dense, claustrophobic, and grisly. Some resort to allegory, but many show more shadowy and unfathomable scenes of death, starvation, and violence among the banalities of everyday life. Briggs honed her talent for depicting such grim scenes in Juárez, Mexico, at the height of the city’s reign as the murder capital of the world.

In sequence, Briggs’ prints resist any imposition of narrative, much the same way Strand’s poem eludes it. If anything, what links the images is the grim architecture of dilapidated warehouse interiors, somehow cavernous and claustrophobic at the same time — like the setting of a dark, inescapable dream. Indeed, this eerie warehouse, this surreal room, appears, too, in some of the other prints on display that don’t belong to the series. 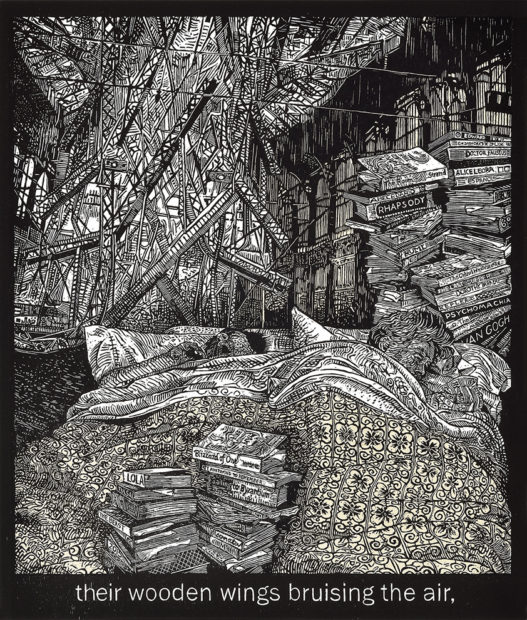 One of these, dated 2012, contains the full text of the poem and appears to be the seed of The Room series: a scene of a couple sleeping snugly in a bed, with books piled high around them, and a warehouse roof collapsing in the background. As a single image, this one perhaps encapsulates the feeling of the poem the most, in its sense of the inexorable. That no matter how we buttress ourselves against the misfortunes — with knowledge, material things, architecture, art, poetry — we are ultimately powerless to prevent them. We are sleeping while the horrors occur, their shadows the spilled milk the world cries over.

Alice Leora Briggs’ ‘The Room’ is on view at LHUCA in Lubbock through November 25, 2017.

While I sort of agree with the author’s initial observation that most marriages between poetry and visual art fail, it may not be a result of the marriage but, perhaps, some inherent weakness in one or the other medium (or both). And the successes are worth mentioning, in the western European tradition perhaps the history of relationships between visual art and the Dante’s Divine Comedy stand as exemplary. Anyway, the author is right…it is not easy to bridge literary and visual arts and easy solutions often fail. While I have a bit of a bias–living on the Llano Estacado–the author has brought focus to some serious work.

Alice Briggs’s work is a marvel.