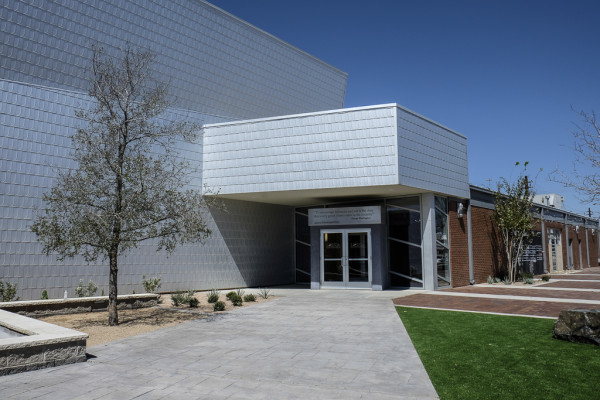 One entrance to the massive LHUCA in Lubbock

This week I found myself in Lubbock with a lot of time and little to do. Luckily at the Hub City’s downtown edge is its Cultural District, which is a combination of studio spaces, artists’ residences, galleries and a theater, and at the heart of it all lies the Louise Hopkins Underwood Center for the Arts (LHUCA). Lying adjacent to the freeway and bordered by some railway tracks, the 17-year-old LHUCA compound has led the area’s transformation, and its modern building’s landscaped courtyard features sculptures, murals and even Candy Chang’s “Before I Die” wall. 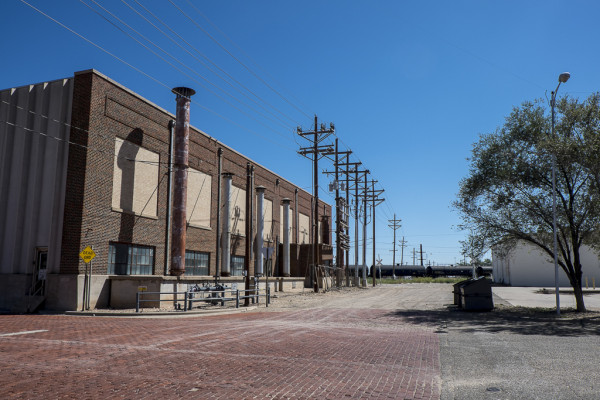 Lubbock’s growing Cultural District adjacent to its downtown makes use of historic buildings as well as some newer ones. 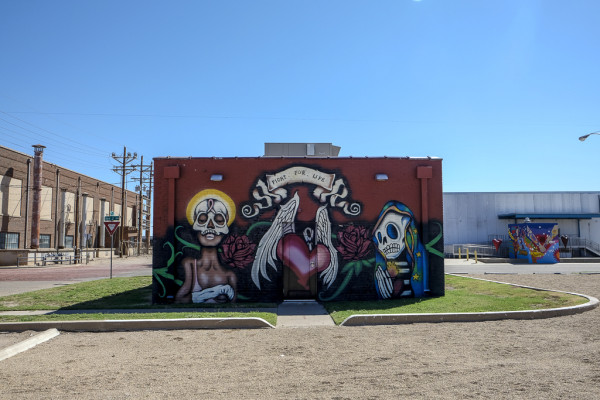 In the courtyard of LHUCA

Just inside the public galleries, Wen Fan’s undulating ceramics line the foyer and hall. The Pennsylvania-based Fan’s work is understated and elegant (in stark contrast to what lay ahead in the main gallery); the sculptures emerge from the concrete floor and interact with the changing daylight streaming through windows. Her smaller work lines shelves down a hallway, grouped in orderly clusters of black and white forms. 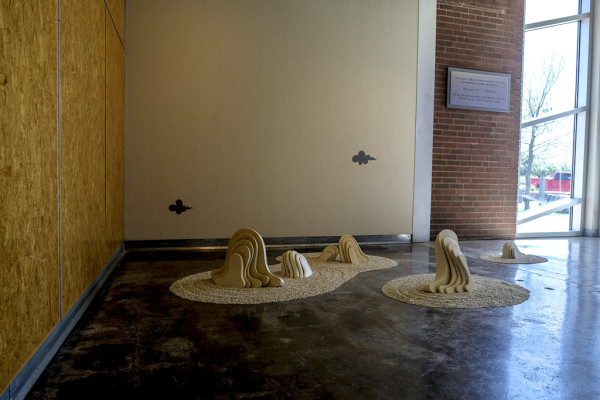 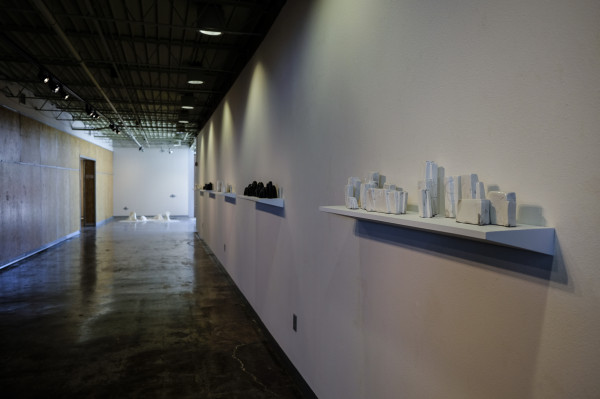 A side gallery hosts dynamic watercolors by Liza Littlefield. Littlefield explores human interaction with the natural world through sometimes surreal flora and fauna imagery, and the paintings are unusually bright and defined for watercolors. The solitary birds on board and in cutouts are more beautiful than they are thought-provoking, and the more interesting pieces, technically, are watercolor cutouts mounted on plexiglass of hands and various plants and animals. I did pause briefly at a painting of a bird amidst tree stumps holding a severed finger in his beak. 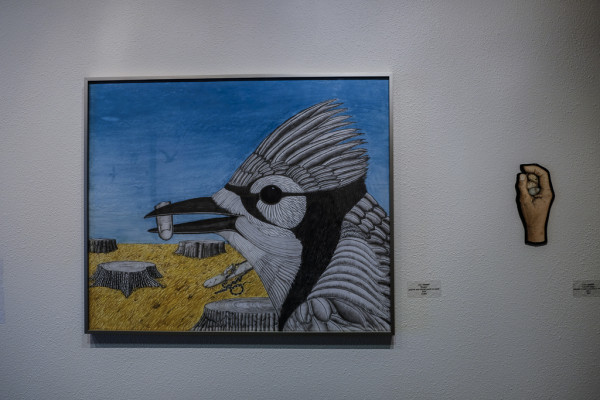 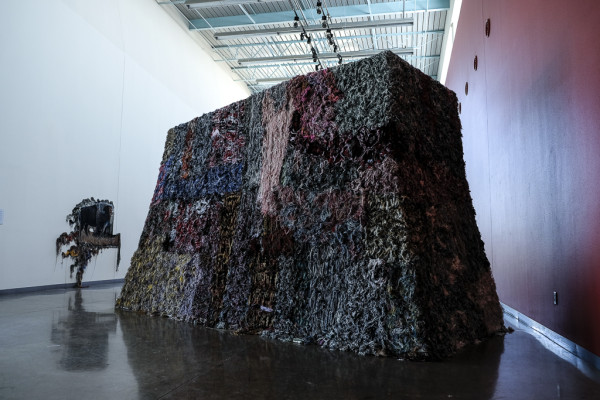 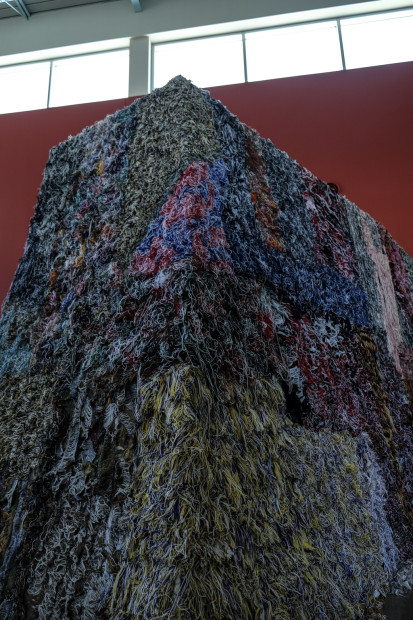 In the gallery’s main space is Bridget Elpers’ solo show “Narrative Rewritten: A West Texas View.” Elpers (currently based in Lubbock) deconstructs blankets, sweaters and the like to create imposing forms; the most overpowering piece is a rising monolith entirely covered in coiled, colorful yarn as if sprouting  psychedelic fur. Floating just past this are crocheted “granny square” afghans reworked into circular objects with trailing tendrils like overgrown, airborne jellyfish. Elpers’ trick is transforming the intimate and mundane to weird and playful, and while I want to call them monoliths and jellyfish, the works are actually inspired by the landscape of the Caprock Canyons State Park. Elpers writes: “…[the work is] given a new identity and picks up new characteristics as the dust of the space accumulates around it. It also leaves a part of itself behind when the delicate fibers get tossed around over the time it is there.” 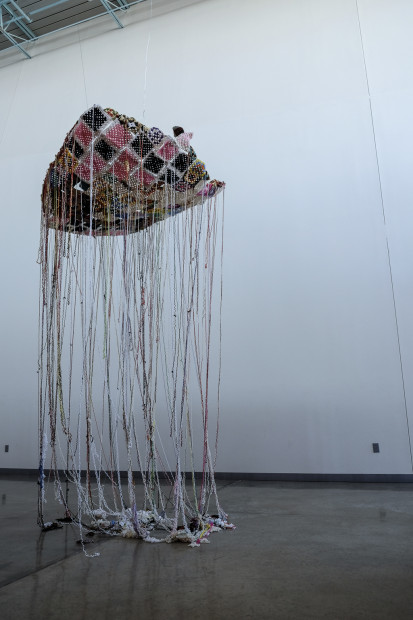 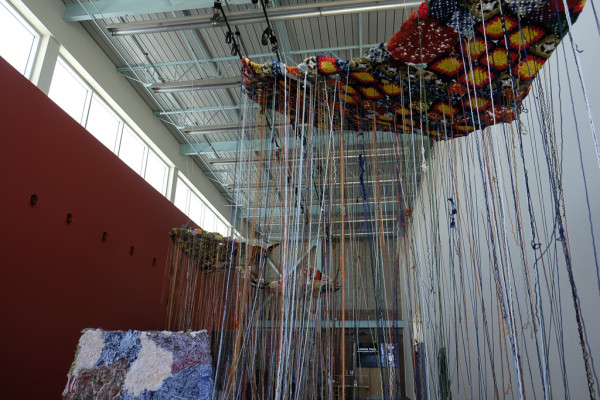 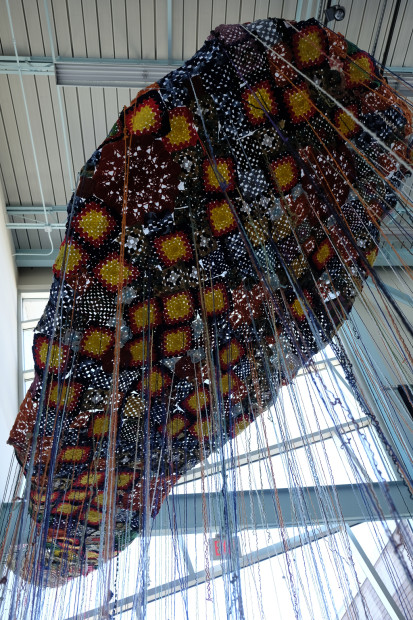 I wasn’t around long enough to experience a First Friday in Lubbock: Each first Friday of the month the neighborhood hosts studio tours, open galleries, music and more. It reportedly makes for a lively event. First Friday or not, the next time you find yourself in the Texas panhandle you should do yourself a favor and check out Lubbock’s growing Cultural District, and definitely stop in at the LHUCA.

And I might add Linda Cullum and Maisie Alford who curate and set up most the exhibits are fantastic to work with. I had a show of painting work in the main hall in the summer of 2013…attendance at first Friday blew me away. I would say 700-800 people saw the show that night. To boot I was told that it was a light crowd. The LHUCA is becoming a must see art attraction when visiting Lubbock.