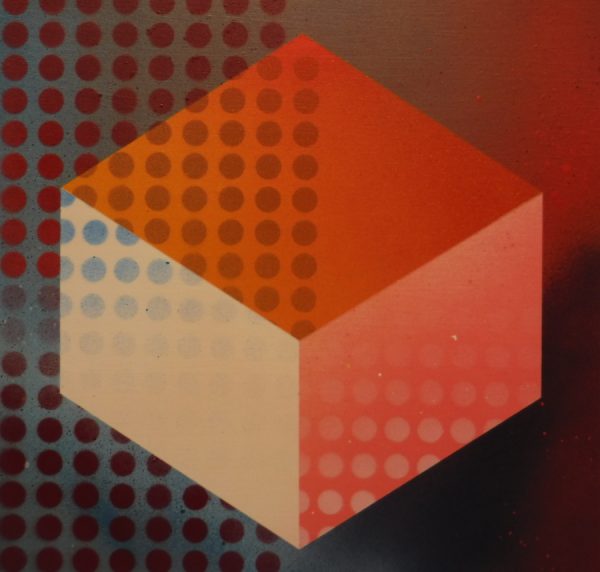 On my first day of high school theater class, the teacher led us through an activity on personal space. Pairing students off, each partner stood across the room, making eye contact, and advanced toward one another until one felt that the other had come close enough and said, “Stop.” It was a proximity game of chicken. During this exercise, we noted that partnered students stood at varying degrees of closeness to one another, depending upon familiarity and comfort level. The pair I recall best was the (male) drum major and the (female) bass clarinet player: they walked straight toward each other and embraced. The drama teacher pointed out that the two had acted in several plays together and knew each other well from marching band. (I remember this so well, I suppose, because I had a crush on the drum major. But don’t mind me: I had a crush on everybody in high school.)

This lesson was my first encounter with proxemics theory, an area of nonverbal communication pertaining to interpersonal space. If one pictures a series of four concentric rings radiating outward from oneself, the closest ring/distance is intimate space, followed by personal space, then social space, and the outermost ring is public space. The width of each “ring” is determined by such factors as gender, relationship, environment (i.e., habituating crowded settings, like a subway, versus living in the Big Bend), and culture. Our preferred personal spaces remain intact — we carry these borders with us — though they are also dynamic in that we might allow someone to move from personal space to intimate space as relationships change.

Austin-based artist Alan Disparte explores this paradox of the porousness/boundedness of interpersonal space in Proxemics, an exhibition of new work at the Louise Hopkins Underwood Center for the Arts in Lubbock. Disparte envisions our cushions of personal space as invisible shields behind which we plot our courses through day-to-day existence. “My interest,” he explains, “is to highlight what might otherwise be this invisible shield, represented as a cubicle. Similar to people, each cube is individually unique but shares a common physical exterior.” Within the cubicle, though, Disparte includes openings — avenues for intimacy. In Extrapersonal Space [pictured at top], space outside the limit of our physical reach, the cubicle’s edges are, at first glance, strongly delineated: there seems a very specific inside- and outside-the-cube. However, these strict edges are transgressed by rows and columns of circles that penetrate into the cubicle’s core. The softening features of these circles are echoed by unruly splatters of color, like a good-humored elbow to the ribs amidst the painting’s more rigid elements. 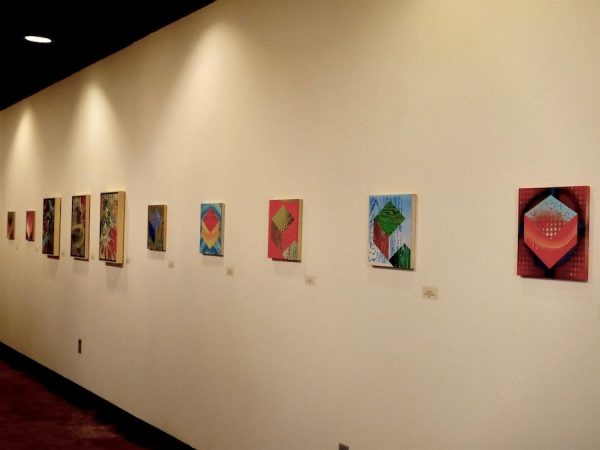 The experience of standing before the works on display (linear format) is different — as one would expect — than that of seeing them on the artist’s website (depicted as a grid). What struck me in viewing both modes of presentation was how each yielded a distinctive expressive subtext. In the Martin McDonald Gallery at LHUCA, we encounter each small painting independently, moving down the corridor gallery to pause before each. As if meeting individual acquaintances (at social distance), we see in each work the familiarity of the similar while noting the subtle nuances of difference; but we do so discretely, with each painting as its own entity. In contrast, the website’s grid format of Proxemics assembles the paintings as a unit, a community of individuals in (nonverbal) conversation with one another. Viewed this way, the series brings to mind a maze of office cubicles — each holding a nucleus of humanity within it — cordoned off from one another, except through an intricate series of entrances and exits. Moreover, the grid format serves to reinforce the fact that each painting is itself a grid. 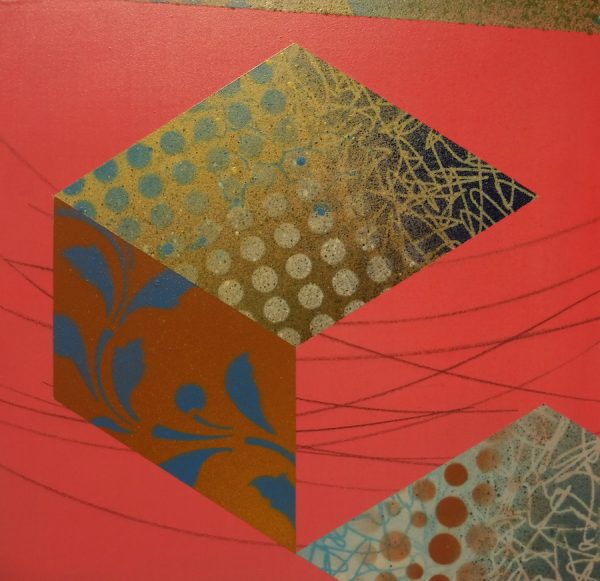 Which it is. And herein, perhaps, lies the metaphorical ingenuity of Disparte’s cubicle symbol. Rosalind Krauss noted that the Modernist painters used the grid because it promoted “silence, expressing it moreover as a refusal of speech… . This silence is not due simply to the extreme effectiveness of the grid as a barricade against speech, but to the protectiveness of its mesh against all intrusions from outside.” Thus, Disparte’s use of the grid (albeit expanded to the cube) in Proxemics reifies the nonverbal cues bound up in our hard-edged, protective personal borders. 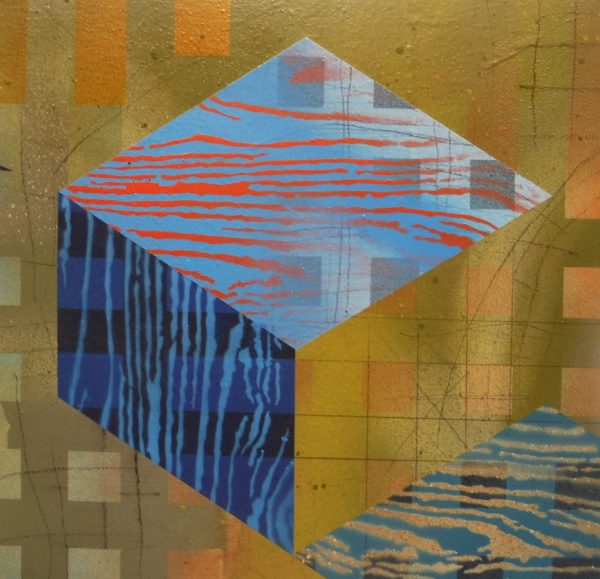 But Disparte is no Modernist. He adopts the grid as an artistic convention while simultaneously disavowing it. He does this through his use of disappearing boundaries, intruding Pop patterns, appropriated drip-and-splatter gestural motifs, and spray-painted gradations set against flat expanses of psychedelic color. Country and Culture, for example, repeats the grid multiple times: in the cubicle itself, in spray-painted checkerboards stenciled with tape, and in graphite elements that lend an architectural quality to the work. This proliferation of squares is contradicted, though, by the pseudo-organicism of stylized wood-grain in hues of cerulean and orange.

Proxemics’ straightforward appearance belies a complex series of dyads: hard-soft, 2D-3D, flat-modulated, masculine-feminine, closed-opened, Modern-Postmodern, manufactured-painterly. Such contradictions allude to the intricacies of human interaction. Had I been partnered with the dreamboat drum major in theater class long ago, I’d have yelped, “Stop!” before making it halfway across the room. The distance between social space and intimate space — while only a couple of feet — might as well be a chasm. Yearning for intimacy and accepting it are two different things.

On view through Sept. 28, 2019 at the Louise Hopkins Underwood Center for the Arts, Lubbock

Three’s a Trend: Blake and Hannah Sanders, and...