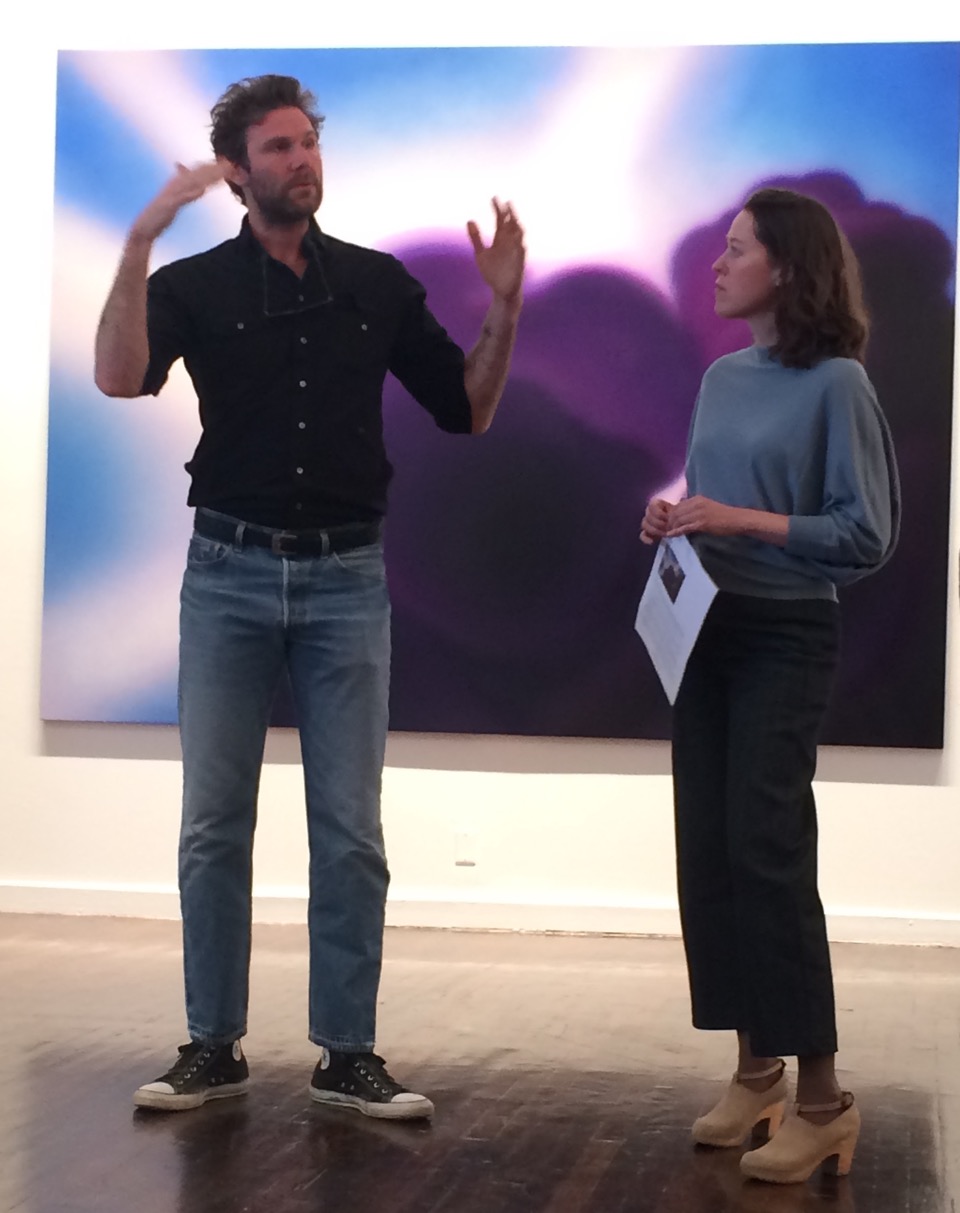 Dan Colen with Susan Sutton, director of Ballroom Marfa, in front of ‘Goodnight My Love’

In the north gallery of Ballroom Marfa, artist Dan Colen waves his arms before a crowd, trying to explain three massive canvases that surround him. He’s an established neo-pop presence in the New York art world. More than a decade ago, the former skate punk crashed the downtown party with a solo show at Gagosian Gallery. His work from that era has sold for millions. Now in his mid-30s, some forget the debate of his early party-boy years: is this good art or just collectors’ hype?

“They’re impressive, because they’re big,” an expat artist whispers to me. She could be talking about Colen himself, who stands tall here in Marfa, beefy in a black button-down, black sneakers, and faded jeans. Despite being in the center of the room, he’s not the focal point. This is a group show—called After Effect—and Ballroom generally features lesser-known or up-and-coming artists.

Colen’s painting, Goodnight My Love, is sumptuous, but the viewer needs a little distance to fully appreciate the wet, spray-paint quality of what looks like puffy purple clouds against a sun-streaked blue sky. Talking to those gathered, Colen struggles to locate words like “explore,” “search,” and “figure out” until he arrives at his explanation: “I wanted them to be formless, beyond background and foreground.”

His source material is an animated still from the 1940 film Fantasia. Classic Disney animation is a well that he’s drawn from before, repurposing scenes from Pinocchio in his candle paintings. “It’s about time,” he explains, “about something we cannot hold.”

Colen says the same about the thin silver sculpture on the floor that tapers at the ends like a highway guardrail that’s seen a few accidents. It’s a bit bland, even if it’s supposed to be about “the moment of impact.” He wraps up his talk. “I’m trying to unlock the power of the moment.”

The desert town is having a moment, too, as Ballroom combines its spring gallery show with Marfa’s anti-SxSW music festival, called Marfa Myths, supported by the record label Mexican Summer. This weekend, the town has swelled from its normal size of fewer than 2,000 residents.

The concerts are memorable, and all the institutions play along. There’s a two-hour takeover at Marfa Public Radio, a soundscape at the Chinati Foundation, a live score of an animated film at the Crowley Theater, an African dance party at El Cosmico, a rock show at the Lost Horse, performance art at the Judd Foundation, and a series of indie bands on the big stage at the Capri. The town is a cheery mix of art fans and music lovers from New York, L.A, and beyond. And all of us Marfa full-timers who serve them.

At Ballroom Marfa, Colen’s work is juxtaposed with World War II-era Transcendentalist painters from neighboring New Mexico. The paintings, by Raymond Jonson and Emil Bisttram, contrast with Colen’s soft shapes. The Transcendentalists’ vector lines are Wassily Kandinsky after Bauhaus, but with an earthen pallet more suited to the desert southwest. 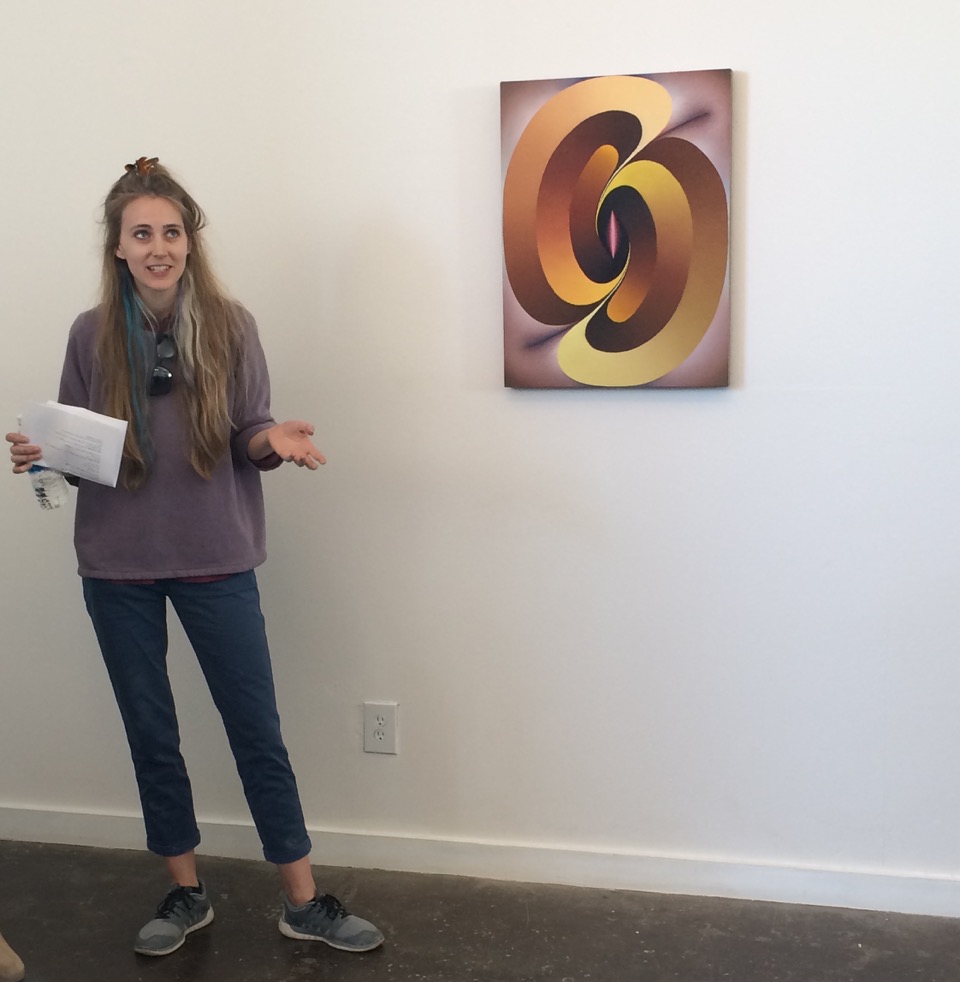 Loie Hollowell, in front of ‘Linked Lingams in Yellow and Purple’

In the center gallery, an emerging artist named Loie Hollowell describes her series of lingam swirls, painted in bright hues. Like Colen’s clouds, they have a glow that Hallowell explains is her use of “white illustrating light.” She calls it “peeling the color out until it gets to white.” They also have a texture. And close up, they’re corporal. She uses a fuzzy brush to build-up a speckled, freckled surface that give these swirling abstracts an allusion to body hair and the human form. The vaginal references are literally ecstatic. In the glowing center of each painting, there’s an almond-shaped mandorla, like the holy aureole that surrounds the Virgin Mary in many depictions.

Out in the courtyard, the noonday sun has the art-goers collaborating in a group squint. There, West Coast artists Michael Dopp and Isaac Resnikoff—together known as Arturo Bandini—show off their shack. The gallery-within-a-gallery is a splotchy white shed with an overhanging roof that features eight artists. It’s an exact replica of their studio in East L.A. It made the artists double-take when they arrived in Texas to see it cloned in a new setting.

The themes in the shack are earth and sky, featuring an actual fog machine that fills the ratty room with white smoke. Three over-sized walnuts sit on the floor in their shells. According to their artist Josh Callaghan, the nuts are fully realized inside, with a wholly sculpted interior that is unseen by the viewer.

The final element of the Ballroom show is a short film loop from 1942 by Oskar Fischinger, who worked in Hollywood. This is a rare piece to license, and a treat to watch. It’s a soundless piece of slow psychedelia; color bands and geometric shapes pulsate rhythmically. (No tie-dye swirls here, though. It’s more formal and orderly.) Squares, rectangles, circles, and diamonds jump to life from the animator’s drafting board.

Today’s graphic designers know all about After Effects, the software made by Adobe, and that this Ballroom Marfa show is called After Effect is not a coincidence. There’s a sense of post-production in many of the pieces, with appropriated and duplicated material throughout. And most of it is done by brush. “It’s really a painting show,” Colen says, surprising himself with the sincerity of his statement.

After Effect is at Ballroom Marfa through Aug. 21.