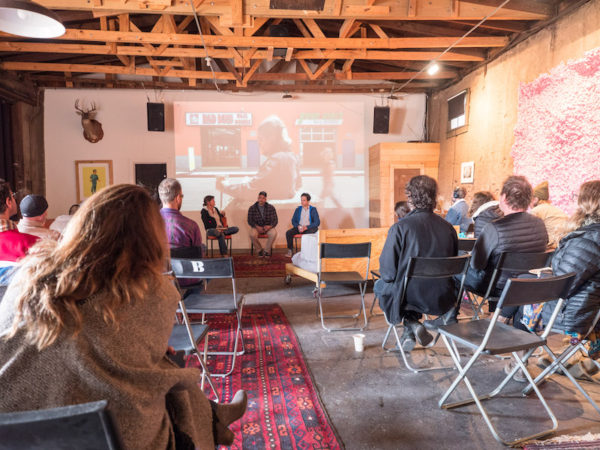 Water is life. The statement served a rallying cry at Standing Rock during the massive protests against the Dakota Access Pipeline. Yet, according to the legal statutes regulating water law in Texas, water is not life. Water is chattel and property. A commodity-in-waiting to be extracted, privatized, and either bottled or contaminated, as suits a corporation’s needs to maximize profit.

Places like Flint and Standing Rock are not so far from Texas. One of Dallas’ few celebrated public spaces is in fact a monument to the family of Kelcy Warren, CEO of Energy Transfer Partners, the company behind the Dakota Access Pipeline. In terms of colonial, environmental, financial, and racial violence, Klyde Warren Park is as ugly a monument as those to Robert E. Lee. Moreover, Flint and Standing Rock are very close to Texas because the slow violence of pipelines and water contamination is happening in real time in West Texas. The Trans-Pecos pipeline and Alpine High Development threaten the Big Bend and Balmorhea Parks with the same fate.

To address these local and global traumas, Ballroom Marfa organized a weekend of critical inquiry and public discussion of racial and environmental justice, water, human migration and the place of art practice within these fields. 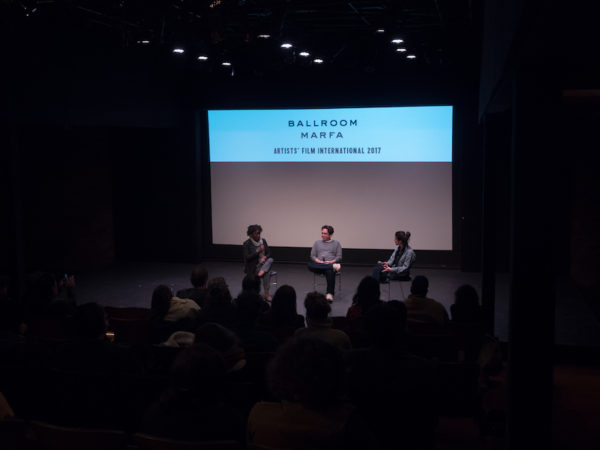 To begin, on November 18, Ballroom Marfa screened the film Serpent Rain, its selection for Artists’ Film International 2017. Serpent Rain is a collaboration between philosopher Denise Ferreira da Silva and filmmaker and artist Arjuna Neuman, and was commissioned by Stefano Harney for the Bergen Assembly. In addition to Serpent Rain, Ballroom screened 12 other video selections from AFI 2017, and organized the above-mentioned symposium.

On the Sunday after the screenings, Ballroom hosted at a nearby venue a panel featuring Ferreira da Silva and Neuman, as well as Timothy Morton, author of Hyperobjects and co-curator of the Spring 2018 Ballroom exhibition of the same name; Rafa Esparza, the artist behind Ballroom’s current show Tierra. Sangre. Oro.; Yolanda Blue Horse, co-founder of the Society of Native Nations; ecological systems designer, consultant, teacher, and permacultural grower Nance Klehm; and Coyne Gibson of the Big Bend Conservation Alliance. 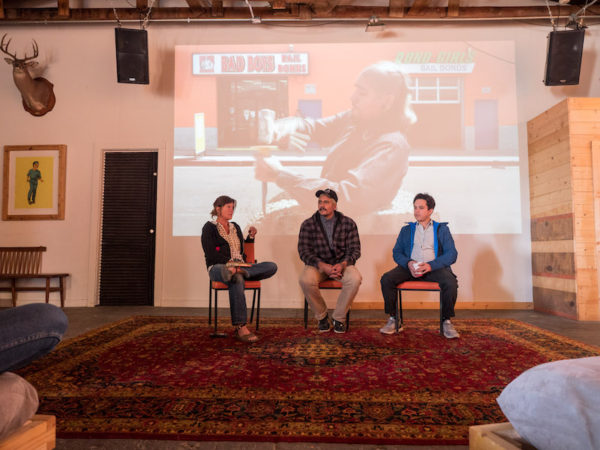 The subject at heart of the discussion by this cross-section of activists, artists and thinkers was the idea of  collaboration. What was so powerful about the weekend’s conference was the attempt from a number of different subjective and practical standpoints to evoke an ethics around collaboration. Following the thinking of Timothy Morton in his most recent work Humankind, “collaboration” can be thought of as solidarity and radical intimacy between both the human and the non-human — an intimacy that prohibits banishing undesirable elements to some unseen “away.” This definition raises two questions: 1) What does collaboration look like? and 2) How is collaboration central to art workers in 2017? — both in order to advance the field and to undo the systems of abuse that run rampant and unchecked within it. 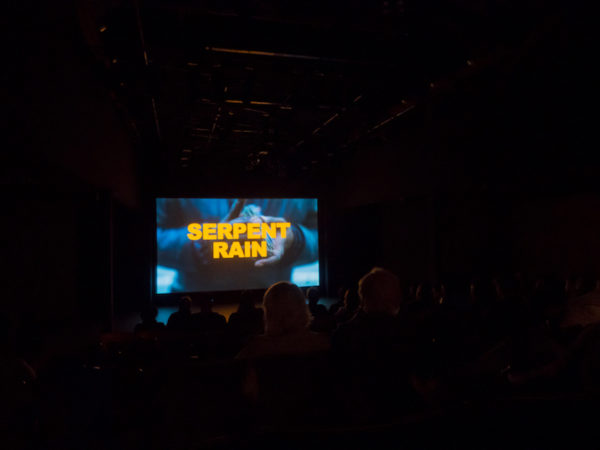 The weekend kicked off with the screening of Serpent Rain, which was initially commissioned in response to the discovery of a sunken slave ship, and the challenge that this disinterred complicity in the slave trade posed to the Norwegian narrative of colonial innocence. To redress these wrongs of historical narrative, Ferreira da Silva and Neuman sought to make a film without time. Serpent Rain is a meditative, non-linear narrative that seems to emanate from the landscape itself. It presents history and a vision for the future in its juxtaposing of lyrical, philosophical aphorisms whose content includes slavery, colonialism, and capital with long-form environmental shots that are vibrant in their strangeness and intimacy.

Ferreira da Silva claims in the film that the attitude towards the earth itself that has given way to the present state of environmental catastrophe is the master-slave dynamic of chattel slavery that still dominates planetary scale logistics. The ground of human and non-human life has been reduced to a site of projection, exploitation, and banishment out of sight, largely as a means of providing comfort and entertainment to people in the here-and-now.

Yolanda Blue Horse and Coyne Gibson took up this theme in the first discussion on Sunday as it pertained to their experiences in on-the-ground and legal activism around water issues. Their questions: When the legal infrastructure systemically advantages those with money, aka oil, what strategies remain? Is presenting information enough to activate change? How effective is the current mode of voluntarist activism? We can all show up with banners to Kelcy Warren’s house, but short of storming it like the Bastille, what can committed citizens do to slow the steady expansion of Warren’s Energy Transfer Partners’ pipelines?

Rafa Esparza and Nance Klehm next attempted to address their strategies of engagement in a powerful and emotional conversation. As a video of Rafa Esparza’s 2014 performance piece bust played in the background (in which the artist encased himself to the chest in concrete and then chiseled himself free in front of the LA County Jail), Esparza and Klehm talked about land, elemental forces, environments and bodies. How do you work with land you love dearly, land that has been affected violently? Their common ground is in the way they reclaim and center their work on supposedly undesirable, unseen, banished, and invisible materials. As Klehm put it, to hack the system is not to present more information about injustice, but rather to function without any sense of putting ugliness “away” or “elsewhere,” and to act from a place of deep fury, grief and love.

Timothy Morton described it eloquently in the panel’s final conversation. Even within protest and resistance, aesthetics is not just PR wrapped around some core of informational content. From the perspective of Morton’s “solidarity with non-human people,” there is little to distinguish the aesthetic and the activist. The thrust toward action that elides the aesthetic (as mere sugar-coating) stems, for Morton, from a misguided anxiety around passivity. Morton explains that the anxiety is part of the very logic and system of settler colonialism — the “passivity” of art-work, as well as educational, emotional and care work — exist as threats to Capital’s profit-churning algorithms. Everything in the room is made out of some concept. Your very Tweets take form in social life. 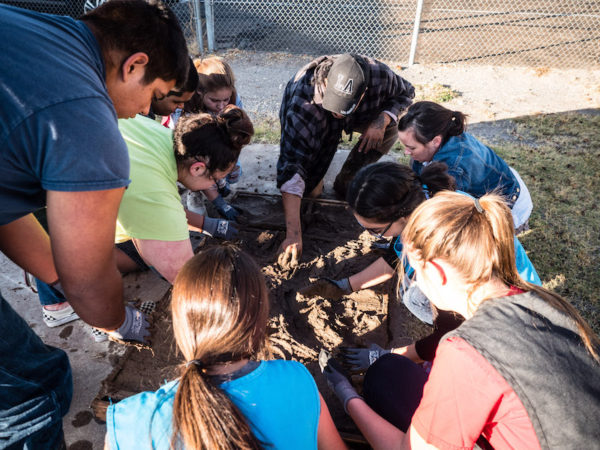 The Water Body screening and panel discussion was not only an eloquent invocation to a future that challenges the contemporary forces of ecological, economic, racial, and aesthetic violence, but as well a practical introduction to the near-term projects taking place at Ballroom Marfa. 2018 will see the opening of its long-term commission Stone Circle by Haroon Mirza, and the spring exhibition Hyperobjects co-curated by Timothy Morton and Ballroom curator Laura Copelin. When considered alongside the week-long educational program involving Esparza and local Marfa teenagers coordinated by Ballroom’s Sarah Melendez, the panel proves Ballroom once again to be ahead of the curve in exhibiting the work of exciting emerging artists and programming innovatively at an institutional level. And it’s exciting that many of the panel’s participants, like Blue Horse and Morton, live and work in Texas. What the weekend proved is that an intimacy with the very sites of conflict is the necessary precursor to the emotional, aesthetic, and organizational labor of creating new infrastructures — ones not modeled on colonial violence. Texas is ripe for it. Who would have thought?