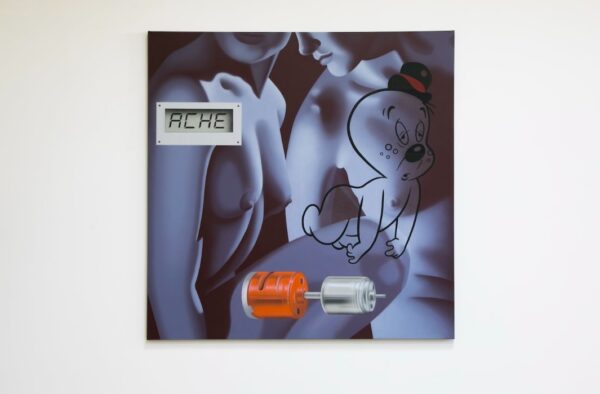 With 2,500 ~ 3,000 artworks in ‘a lived-in house that’s always churning,’ the idiosyncratic collector Wynne ‘hopes people enjoy seeing the art as much as we’ve enjoyed collecting it.’ A majority of the 40 artworks on view feature Texas artists. Key statewide artists include Rachel Hecker’s Ache, whom Wynne sees as the most overlooked artist in Texas. An early important Untitled 1994 piece by Scott Barber, recalling the tragedy of his untimely early death, is matched by a current drum piece by Jake Elliott & River Shell made this year. Appreciating her sense of humor, Celia Eberle’s fake ceramics, Mark Flood’s beautifully made skateboards, and Jeff Elrod’s hand-drawn computer squiggles feature key works in the collection.” 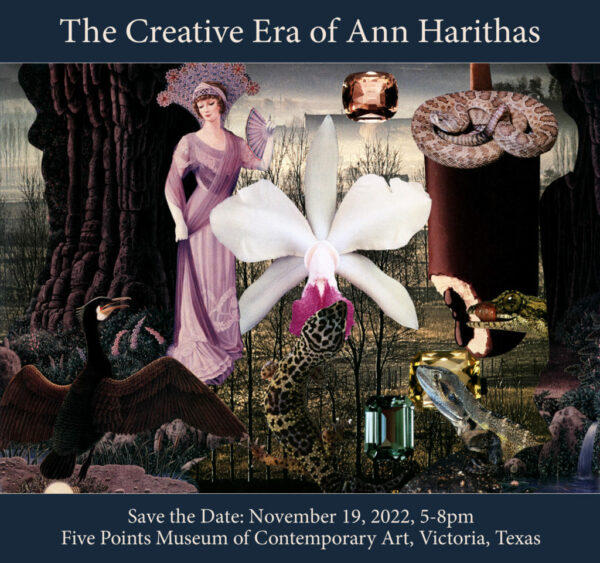 “The Creative Era of Ann Harithas is both a retrospective of the acclaimed collage artist’s body of work, and a tribute to what is truly an era of creativity ignited by Harithas, beginning in the 1970s and culminating in her curatorial work at Five Points Museum in Victoria, Texas, founded by Harithas in 2016. This exhibition will focus on the extensive body of collage works created by Harithas from the 1980s to the 2010s, as well as her own art car creations and those she commissioned and collected. The exhibition will also consider this work in the context of her contributions to the artistic communities in Victoria, Houston, and points beyond such as New York and California.

The art and collage work of Ann Harithas was born of the natural state of her creativity, and its purest manifestation was found in the intimate and revelatory collages that she crafted by hand. In concert with her personal art, however, she also curated innovative exhibitions and brought both independent and world-famous artists together to catalyze collaboration into a unique creative vision. This vision has helped lift and transform artists and society – her effect upon the world became a creative era, one that would have been unreachable without her dedication and support.” 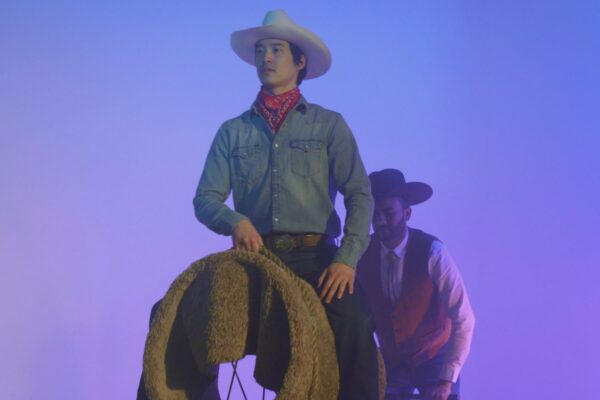 “Kenneth Tam’s solo exhibition Tender is the hand which holds the stone of memory features a series of commissioned sculptures alongside a two-channel video installation. In his exhibition, Tam unearths forgotten histories in order to reimagine our own identities and to question dominant myths that shape and govern our bodies. One of the most enduring myths that still haunts our nation is Manifest Destiny and the conquest of the American West. These ideologies have circulated and remain embedded in popular culture through Westerns and advertising, such as the figure of the Marlboro Man. These images reified claims to Indigenous land as well as distorted Indigenous histories, while also enforcing stereotypes of Anglo-American masculinity that remain pervasive.

Tam’s examination of American westward expansion is rooted in the unrecorded lives of nameless Chinese laborers, who toiled under the most physically arduous conditions in the late nineteenth century. Silent Spikes, the video installation on view at Ballroom, weaves together improvised dialogue and movement sequences from a group of participants, along with semi-fictional scenes of a Chinese worker from inside the tunnels of the Transcontinental Railroad. During Tam’s site visit to West Texas in 2021, his encounter with artifacts and fragments of objects left at workers’ camps along the railroad led him to consider how physical remnants function as stand-ins for the disappeared histories of laborers.” 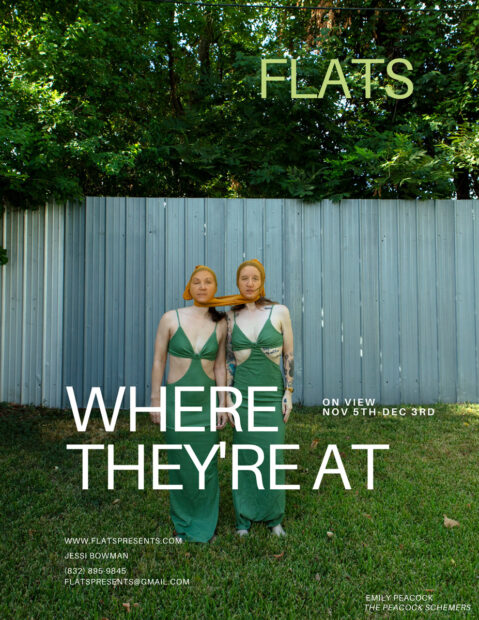 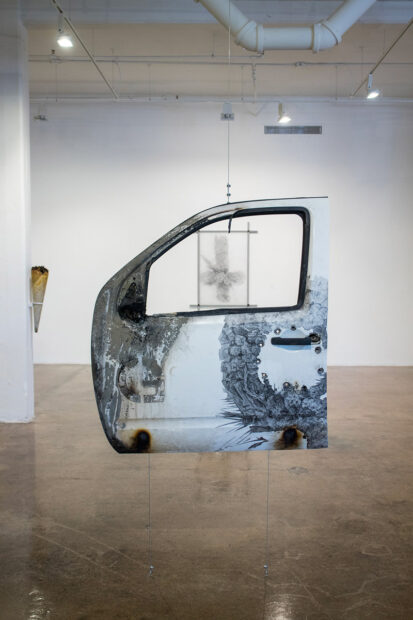 “Artist’s Statement: Recently, I’ve been trying to understand how ‘participant observation’ can be used to understand and describe the set of contingencies played upon family members, who are desperate to find their missing loved ones. By forming collectives, they attempt to pressure the Mexican government into helping them investigate, locate, and excavate mass grave sites, maintained mostly by powerful drug cartels. I envision myself as a reportage artist, who ‘carries back’ stories and situations confronted along the U.S.- Mexico border, where I grew up.

My approach to the material is experimental and incorporates drawing, painting, lithography, sculpture, assemblage, and installation. I use these media as a powerful forum to investigate how to address and embody weighty subject matter beyond international borders. I aim to induce a social collaborative experience with the viewer, referring to the relationship of the body to the object and the sense of exploitation or power. Ambitiously, I am trying to destabilize the border between artist, artwork, and audience—analogous to the socio-political border.”

Free Shuttle Bus Will Get You From Houston...