Joel Sampson’s Rhythm Machines at Dallas’ Conduit Gallery reminds me of something one might see at a Maker Faire or the Musee Mecanique if the people who made those things were less crass. They are delightful musical machines that skimp on the bells and whistles, but are still playful and charming. The giant nerd in me really loves these things. 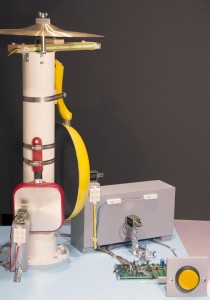 These machines play short, but well-composed songs/beats that are very loud and demand attention. The sounds are made by firing solenoids hard against steel cookware, storage tubs, tin cans, and actual percussion instruments. The damage the solenoids are doing to the pots and pans is visible (and could be a conservator’s nightmare!). 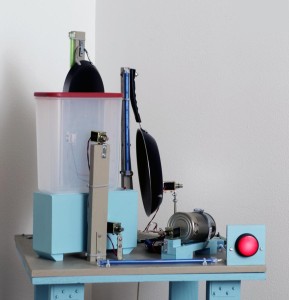 The songs are composed on a computer using samples of each sound, then turned into computer code that drives the solenoids. They are short and may be limited in length by the micro-controllers used, or possibly by the ability of people to sit for very long in front of the machines set at ear-splitting volume. 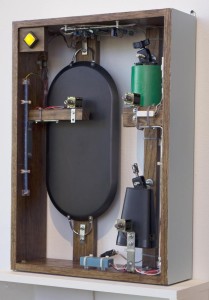 The only thing that irks me about these sculptures is the blinking LED and cold cathode lights that are equally jarring and, for me, add very little to the experience.  The lights are bright and demanding, but not physical enough in relation to the pounding ferocity/old-techiness of the metal-on-metal hammering of the sound-making portions—but this is a small complaint. These machines are pretty great and tons of fun, which is not usually something you get to see at an art show.

Joel Sampson’s Kinetic Percussion: Rhythm Machines will be on view at Conduit Gallery through August 17.

I have one, slightly ‘rough’ video up if you can’t make the show.

The one on youtube was really cool. It reminded me of “the pot calling the kettle” with pans talking to each other when the humans leave. I wish I could have heard the others too. Congrats on the show.