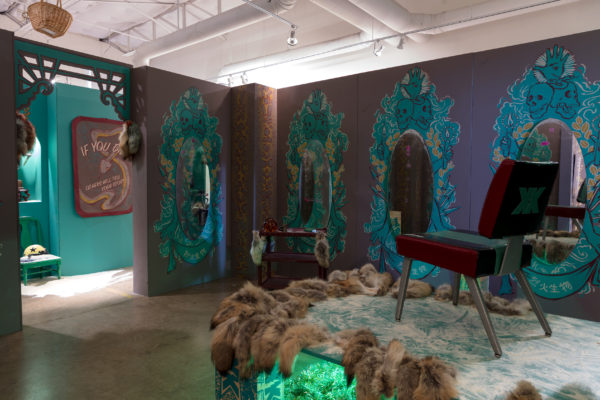 It’s November 12, 2016. Everything we write means something slightly different now. Just as every work of art means something slightly different now. This bell has been tolling, quietly but with impending doom, since late 2001, when a protectionist, reactionary tone settled over our shell-shocked nation in a way not even Lee Atwater would have predicted in 1988.

I don’t think any artist (or truly thoughtful human) in the western world has been easy with the underlying tone being cultivated in this nation after Obama was elected and something called the Tea Party emerged. There was a new writing on the wall (though sickeningly familiar to an older generation) that grew bolder with each year—in spite of the spread of something we think of as inclusiveness, or Occupy, or political correctness—and then frighteningly validated under a loudmouth demagogue who’s given a lot of permission to a lot of people to dismiss the liberty, fears, and, harsh realities of their own next-door neighbors. 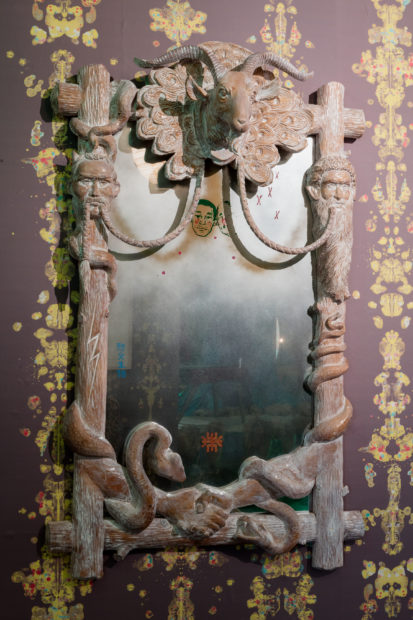 When I walked into Heyd Fontenot’s explosively celebratory, ultra-queer vaudeville of an installation and performance at Conduit a couple of weeks ago, I felt about five massive feelings, all at once. The first, though, was glee, in the way that shooting the middle finger at someone or something can feel so defiantly gleeful. It was clear that Fontenot, a longtime Texas favorite, is done being polite or even moderately accommodating. Good. 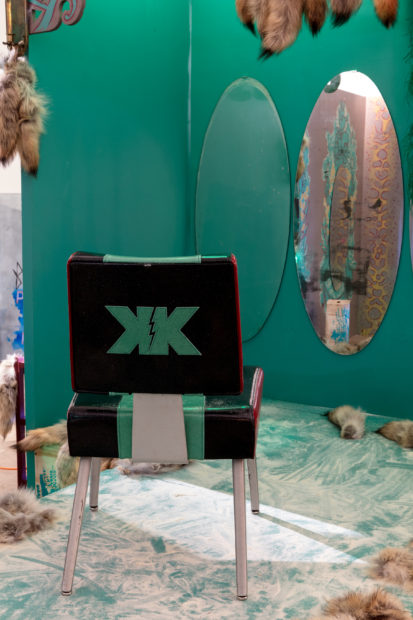 I edged my way through crowds of bodies: half-naked bodies, big leather daddies, voyeurs, and bemused collectors. Roccoco wallpaper and rows of mirrors (framed by skulls, rams, snakes) surrounded a low, glittery stage festooned (notably) with clusters of real raccoon tails and underlined by Christmas tinsel. Camp alert: southern style. On the stage was a spectacular live and naked black man holding impossibly graceful and balletic poses with a slippery vinyl chair as his prop, while acknowledging not one onlooker. And this was just a part of the whole scene. Other sexy, dirty, mondo things were happening in other parts of the gallery. More on that in a second. 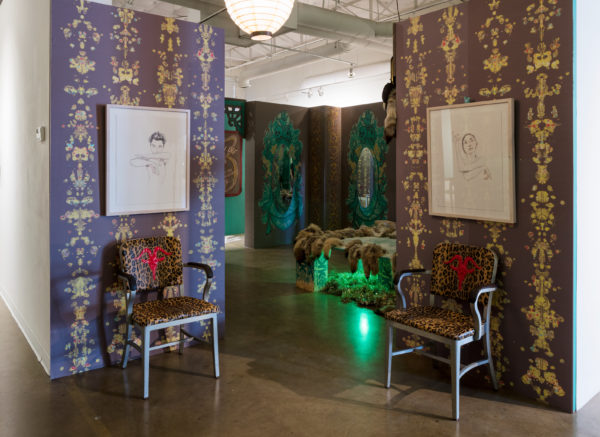 Because here was a kind of heady, sleazy, undenied sexuality (and good humor) some of us happily associate with a kind of liberation and fraternity only found in the back rooms and alleyways and cabarets of big cities: this is our place. Put up or shut up. Get turned on. There’s something incredibly poetic right now that counter-cultures and second-class citizens can defiantly make spaces that emotionally are not safe for everyone all the time, and for that matter do it in a commercial gallery space in Dallas. I have family members who would have been deeply uncomfortable walking through Fontenot’s show. We all do. And it has nothing to do with the people or performers being actually aggressive or dangerous, because they categorically are not. It’s these very ideas that scare some people, the thoughts real and good people actually harbor: unapologetic sexuality, joyful bacchanal, interracial love, love itself. The stakes are very high though, because the real power right now seems to flow only in one direction, and we all know that while the gallery was dense with a power being generated by Fontenot and his peers, that specific power stops at the door. It’s still semi-private. A red state is just outside.

That was another feeling I had while I wandered through the show: anchored. This place, like the art world, is golden here, for this moment, for certain people. But only here, for now. The show felt not so much like a Hail Mary, or a demand to be counted (though there was something of that here) but more like a really good, secret party on the Titanic, with little need for any one contingent’s definition of political correctness. Even if on that night you believed Hillary was about to win and there would be four more years of a stale-mated abatement, you knew the nation and maybe the world had already turned itself toward an iceberg of incivility. The world seems to be tilting toward the right. Progressiveness was great while it lasted. The Enlightenment was an amazing experiment, wasn’t it? 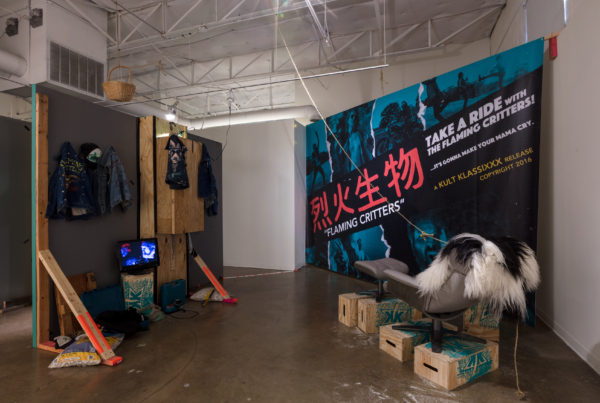 In the next room, a beefy hairy dude in little more than a a spiked denim vest lounged—as arrogantly as one can lounge with one’s balls hanging out—in a leather chair, and yanked on a rope that made the ceiling ejaculate potato flakes down onto the crowd. He did this in front of a massive promotional poster for an exploitation movie (still in the making) called Flaming Critters, directed by Fontenot and starring his friends getting up to no good (the movie’s trailer was playing on a nearby screen)—sort of like if Russ Meyer and Kenneth Anger got together over a long peyote weekend and not only screwed each other but also shot some motorcycle footage around a bonfire. I cannot tell you how relieved I was to see all of this. I cannot tell you how eager I was to take this in 18 days before November 8. And I think most everyone in the gallery felt this way. 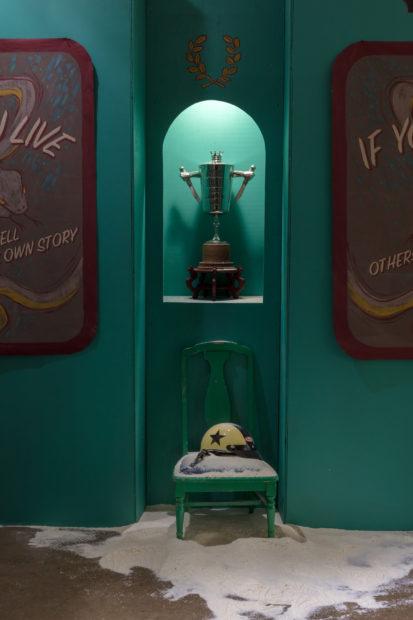 There are elaborate and expertly hand-made banners and trophies and carved symbols throughout, too, a la the lodges of the Odd Fellows or the Freemasons, but instead of reverent for some old-school order, these are mutinous—almost a defiled dare to onlookers. The giant banner at the entrance reads “NO PICS… unless you want a face full of Magik!” (The daddies on patrol that night enforced this rule.) One almost expects to see jars of Vaseline sitting around. Spiritually, there are. But post-performance and unmanned, the installation is actually a beautiful space with some flow, like a nightclub lounge that’s occasionally spit-shined—seedily luxurious but at one with its raw structural elements—its underside—proudly on display. The title of the show is Kult Klassic, and there are double “KK”s silkscreened on upturned ballot boxes scattered about. This is smart, smart work. 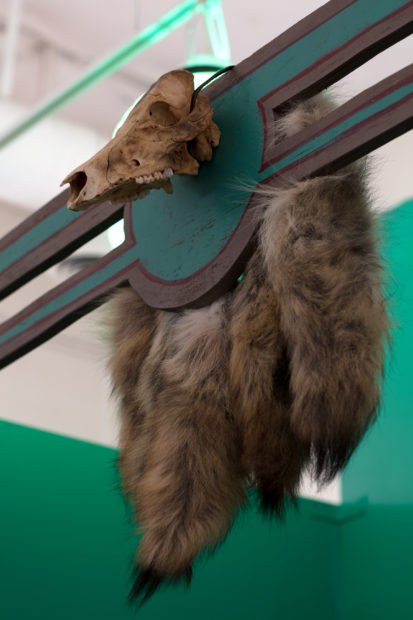 Fontenot is known for his frankly beautiful caricatured nude portraits of his friends. Some of these are in the show, used as artwork on the walls of this larger shrine to queer-driven testosterone. Or is that testosterone-driven queerness? Here’s the thing about leather daddies and bears and all that: Testosterone. The dark chemistry of T that’s behind so much of Trump’s populism has its flipped corollary in a big swath of queer culture, and there’s nothing shrinking or polite or accommodating about it, or apologetic for that matter, which is something the rest of us could tap into at this point. Words like ‘militant’ (and fisting) come to mind. Vulgarity and extremity can be used as stealth weapon for both greater visibility and personal liberation. Why not go there? Weaponize whatever your shit is (unless it’s your sensitivity), because one, it’s fun, and two, sometimes it works. 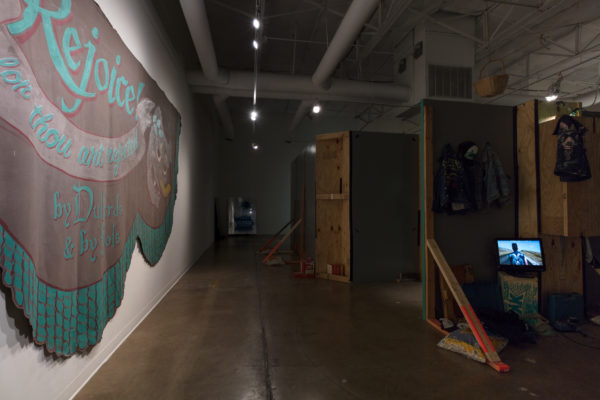 This is not a demographically fair fight. When Fontenot emblazons on a banner “Rejoice! for thou art rejected by Dullards & by fools,” he’s tapping into what sly oppressed groups (and artists certainly) have for generations. What do we have to lose? Shoot the middle finger at the Trump establishment (because it is the establishment). Let’s die on this sword. Is there any better reason to die than standing up for who you are and what you believe in? There are so many different reasons to feel angry or scared or both right now. You have a pussy, or brown skin, or an accent, or a hard-on for your own gender. You are Jewish. You have an art portfolio, or press credentials, or a science degree; you believe in a social safety net, you are a humanist, or childless, or single. Why (why now I mean) are our identities so separated and so defined by some kind of recently imposed zero-sum game against the other identities? It’s far too convenient for Trump and his ilk: that all we liberals (or ‘liberals’) drown each other in shaming rhetoric, that we obliterate each other, before we even enter the ring to fight him.

Why do the populists get to band together under their myriad venoms and be the aggressors, and win? Aren’t you sick of it? Fontenot is.

Through Nov. 26 at Conduit Gallery, Dallas. Photography by Kevin Todora.