“Mimi Kato: One Ordinary Day of an Ordinary Town” at Conduit Gallery 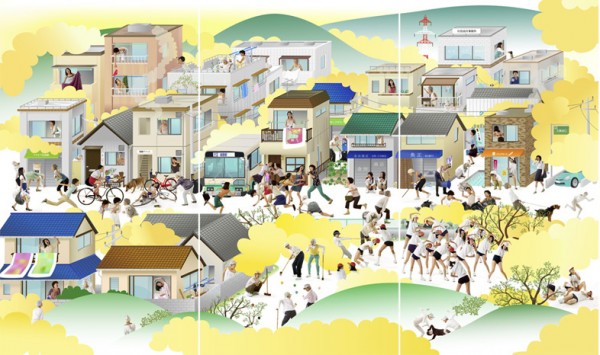 One Ordinary Day of an Ordinary Town, Mimi Kato’s current exhibition on view at Conduit Gallery, is a continuation of the hybrid digital landscapes she first presented at ArtPace in 2009. Kato takes subject matter and format from traditional Japanese art history and then creates stylized illustrations within the context of her contemporary world. In this series, she uses a cityscape painting from the 16th century, Kano Eitoku’s Rakuchu rakugai zu (Scenes in and around the Capital) as an embarking point. References from her childhood memories as well as stories from Japanese newspapers are injected into her narratives. She orchestrates the scenes, directs the various vignettes and sews all the costumes. Finally, she casts herself as each of the characters, inserting her photographic image into the scenes.

On display at Conduit Gallery are the first and the last panels in this series, Golden Sky, Golden Start and Rosy Tomorrow. It is a tongue-in-cheek homage to a number of Japanese artistic genres and styles. In her sets, the “floating world” of old school ukiyo-e woodblock prints and seasonal panels give way to anime-infused landscapes. In the “Superflat” style of Takashi Murakami, the gestures and poses of her “citizens” are informed by contemporary Butoh (a type of Japanese performance/dance) and Kyogen theatre.

Kato’s pieces simmer with the tension and the intrusive voyeurism of a society in which people are ever-close in proximity to one another. What could be perceived as a quotidian aspect of Japanese life, at closer investigation reveals anything but. Events and scenarios in Kato’s productions start with a normalcy and dissolve into things bawdy and absurd. There are businesswomen, shop owners, school girls, housewives and grandmothers couched in the conventional—going to school, to the market, taking a shower, putting out trash. So the questions for me revolve around what I do not see. In particular, what propels them into these aggressive disequilibriums? 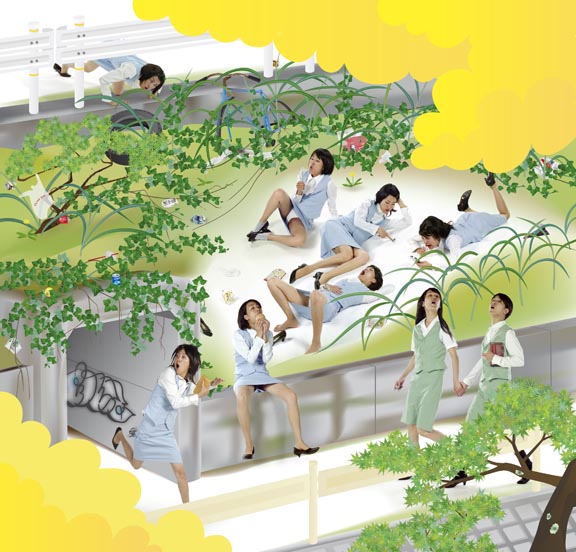 There are confrontations between pubescent school girls and croquet mallet-wielding grandmas, hair-pulling melees at bus stops. Everything seems to be in contention, from who makes it off the subway first to who selects the best Kurume Fushinari (a type of Japanese cucumber) from the local market.

I am unsure whether to laugh or be concerned. A large part of this anxiety revolves around my limited grasp of contemporary Japanese culture. I am dated, big time. My understanding is grounded in the writing of Mishima and Kawabata, buoyed by the arthouse films of Kurosawa and Suzuki’s off-the-chain yakuza flicks. And yes, I’ll admit it, Speed Racer’s shadow still looms large. Many of the nuances and stereotypes that Kato references, fly clean over my head.

One that does not, though, is objectification. 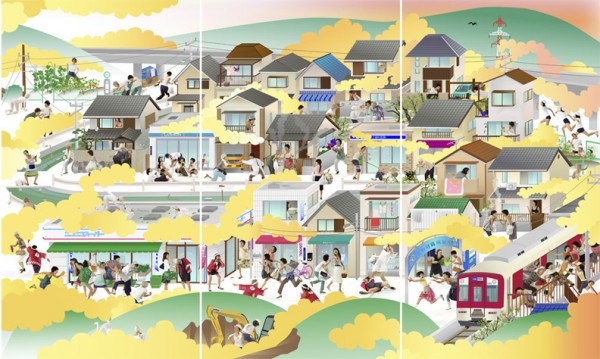 If you are uncomfortable with the infantilization or the objectification of pubescent girls and women, tuff titty, Kato could care less. Businesswomen adorned in tight skirts tumble, ungraceful and spread-eagle. School girls squat compromised and unashamed. Coeds are found slumbering in postures reserved for blow-up dolls, or devouring tomatoes with eyes closed and juice dripping from swollen, pouty lips. Even some of the Hubbits (large white rabbits that Kato uses to draw symbolic comparison to Japan’s pre-Western and mythical past) are found bent over on all fours, without their fluffy little tails. And always there seems to be a “beauty” out of reach in a high window, engaged in some ceremony of beautification.

By casting herself in each on these dramas, Kato confronts the gender-specific notion of traditional Japanese theater arts—Noh, Kabuki and even the fairly recent versions of  Kyogen. The Japanese application of theater arts imparts a strict code duello that relegates all roles to men, while at the same time it exercises a paternal inflexibility in introducing new material in its canon. But most important, Kato issues a call-out that questions the role of women in 21st century Japan. She also throws her hat in the ring with other Japanese artists, in particular Aya Takano of the Kaikai Kiki click, by engaging her audience in an ongoing critique of Japanese consumerism, questioning issues of gender and objectification. Since the 1980s, the target of consumer culture in Japan has been pubescent girls. This was expressed most heavily in Japan’s otaku culture, that part of the population passionate about anime, manga and video games. Manga and anime, the whole otaku culture, were countries that I entered with the assistance of my daughters. Mimi Kato’s landscapes give me a pithy and engaging look into a place I held in limiting terms because I was afraid to learn something new. Afraid to ask for help. So like Kanye said, Ms. Kato, Thanks for the Good Morning.

________
Garry Reece is a fiction writer who lives in Houston. His work has appeared over the years in Muleteeth, ArtLies, The Texas Observer, Arts Houston, Extensions and American Short Fiction.

I visited the Conduit Gallery and spent quite a while lookiing at Kato’s work. I had no understanding of Japanese art however now, after reading Reece’s interpretation I am amazed at the volume of symbolism in her art. My ignorance has been marginally lifted and my appreciation of Kato as an artist greatly so. Thank you.