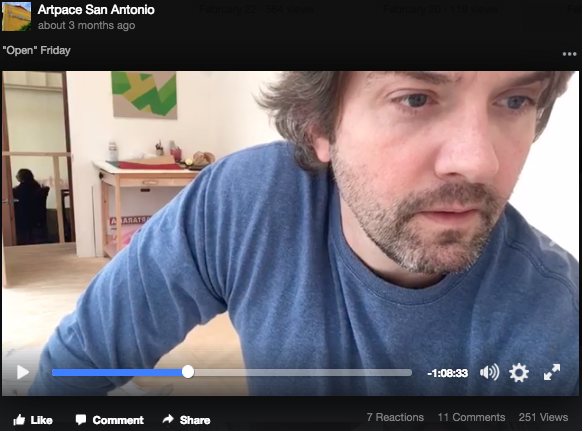 Since the end of January, San Antonio artist Benjamin McVey has been a staple in my life. We’re friendly, but we don’t talk much, have never texted, and I could count our emails and messages on one hand. But through Open, his exhibition currently on view at Artpace, McVey has managed to wedge himself firmly into my daily routine. The concept of the show is fairly democratic: all you need to see it is an internet connection and a link to the organization’s Facebook page; McVey holds studio hours, conversations, and spontaneous artist talks that are livestreamed via Artpace’s Facebook page, meaning that whenever I open my feed, McVey, and sometimes a guest’s face, is expectantly staring back at me.

The fact that McVey is using the gallery as a studio is not new, of course, and might be the least interesting part of his show. The constant co-opting of my social media diet, however, fascinates me. The project shares both the feeling of the “artist as study subject,” in which we examine the process of creation as executed by an exotic being, and the feeling of a slick salesman constantly giving us the same elevator pitch over and over until we can’t help but give in and listen.

By mid-February, I had seen multiple streams of McVey’s exhibition, but at that point I had paid them little attention—it’s too easy to move on to the next thing when all you have to do is slightly graze your finger over a trackpad. But one night, I finally tuned in, figuring I’d watch for a minute or two and then keep scrolling. There were a handful of other people watching the stream, some of them commenting and diverting McVey’s attention from his studio time. And, much like when I watched two Google Homes fight with each other for 30 minutes, I was hooked. During this session, McVey absentmindedly sung along to a song I didn’t recognize, accidentally bumped the camera, and constantly checked his viewership using a nearby laptop. The entire thing was tedious and uneventful, yet I couldn’t look away. With this exhibition, McVey has capitalized on our primitive instinct of trying to figure someone out. We become the spies overseeing his progress. 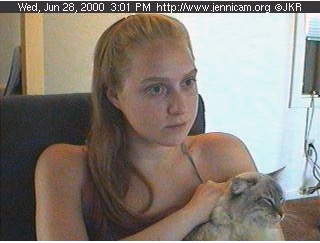 This idea of exposing oneself via the internet began in 1996 when Jennifer Ringley became the first lifecaster with her website JenniCam. While still a student at Dickinson College in Pennsylvania, Ringley set up a webcam that, every fifteen minutes, automatically snapped and uploaded a photo of her dorm room to the internet. This project ran until 2003, chronicling her graduation, two moves, and a sex scandal in which she slept with a friend’s fiancé. It was all caught on camera.

While JenniCam was a revolutionary idea in its day, now these real-time videos take place in and shape a new culture. One example: one of my friends on Facebook, someone that I have had no contact with since high school, regularly streams herself eating at Waffle House. In gluttonous splendor, she stares into the camera, surround by a hiss of ambient noise, and eats chocolate-chip waffles, eggs, and hash browns. Does she look into the camera and sensuously squeeze a ketchup bottle that squirts its red liquid all over the plate? You bet. Because why wouldn’t she? The pseudo-performance is part joke, part a product of boredom, and part narcissistic indulgence. 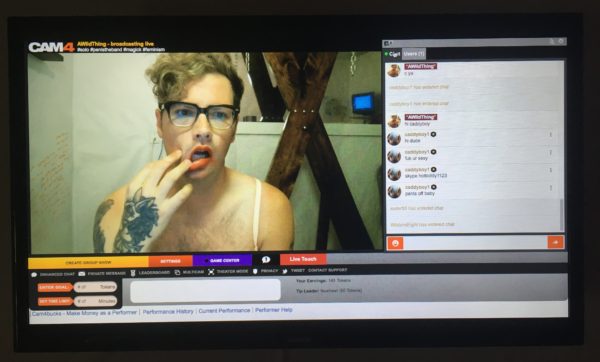 Livestreaming in our contemporary society can of course be inherently political. While some examples are plainly so—such as the viral sharing of police brutality videos that cross our desks weekly, or the Facebook livestreams of congressional town halls—others, like the gourmandizing romp at Waffle House or John Moletress’s recent performance at Fusebox Festival, are political because in this day and age, our bodies are the most political subject of all.

As I was writing this piece, I refreshed my feed and up popped a stream from Venezuela sin Censura of people protesting their political and economic turmoil. Though I am a product of my digitally reared generation, I’m still sometimes stunned that we’re so connected through wires and signals that transmit crystal-clear information across space and time. You can simultaneously watch people campaigning for their most basic rights, and see an overly ambitious chowhound attempt to polish off a 72-ounce steak. The internet really is a magical place.

That last sentence is gold!