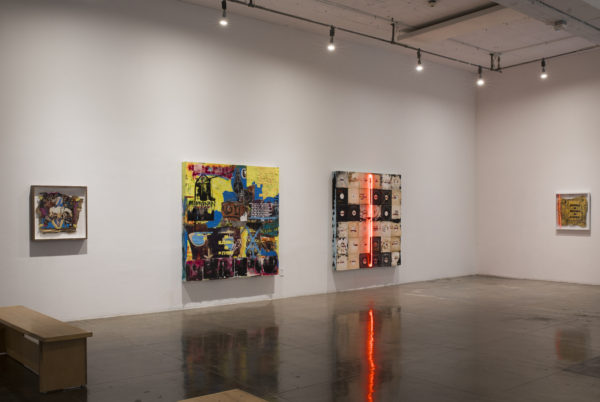 Many Glasstire readers will be familiar with Artpace’s vaunted international residency program in San Antonio, where three times a year, three artists live in Artpace facilities for two months culminating in three solo exhibitions. This spring’s exhibition featuring a Texas, American, and New Zealand artist is strikingly resonant and cohesive, a show steeped in community and demarcation, at once engaged and deeply melancholic. 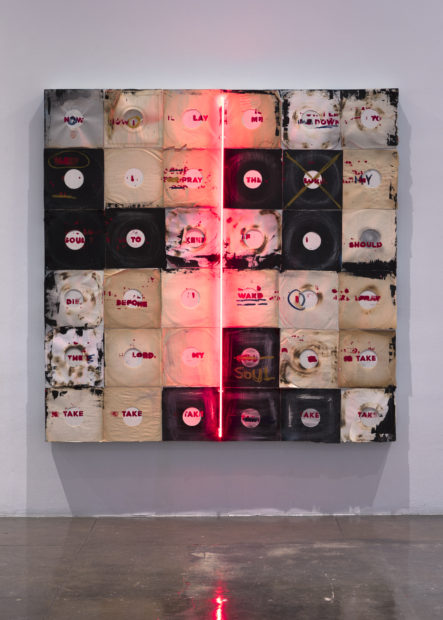 Houstonian Robert Hodge’s Between the Devil & The Deep sprawls across media, materials and references for a heavy, kaleidoscopic fugue on sin, death and spirituality. The title of the piece comes from the Thelonius Monk song “Between the Devil and the Deep Blue Sea”, itself an elliptical and transcendent cover of an earlier song, the phrase meaning something akin to being in an impossible situation (e.g. “a rock and a hard place”). Hodge is fascinated by the legend of Robert Johnson, who lived his brief life firmly between the devil and the deep and recorded Delta Blues in the nearby, supposedly haunted Gunter hotel. The apocryphal myth that Johnson sold his soul to become the best blues-man sent Hodge down, in his own words “a rabbit hole” of cultural and textural echoes. He recorded an album (Between the Devil and the Deep Blue Sea) at the Gunter as a soundtrack for the installation, which mines San Antonio for old records and movie posters. Using a layering, collage-like process, the pieces are hyper-referential yet tactile and almost foreboding. They feel like the physical manifestation one might experience when dying, if the soul actually did leave the body and pass through a portal of the media one saw throughout a life. 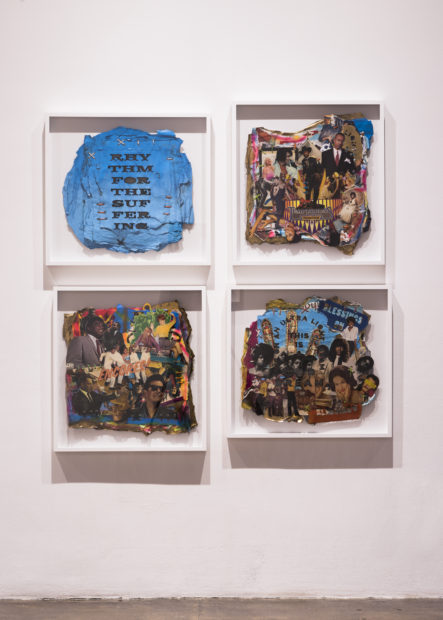 Several other pieces have neon light phrases built in, such as: “Blessings on Blessings on Blessings” and “$oul for Sell”. Hodge uses the show as a dreamy but serious rhetorical provocation. Perhaps Johnson really did sell his soul and just like in the Twilight Zone, the devil tricked him, and he died penniless under mysterious circumstances while his music ultimately became cannibalized by boomer industries of nostalgia and retirement-savings products. Perhaps between the devil and the deep is the impossible setting of Black American life and perhaps those forced to live there have a perspective of the bleak board game we wind through—a knowledge the rest of us may not apprehend until the moment of death. 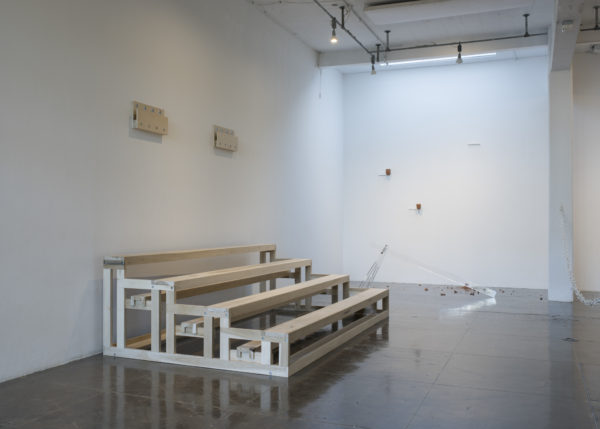 Nicholas Frank’s Frain initially appears as a stark contrast to Hodge, but quickly settles itself in a dialogue of corporeal community and metaphysics. Frank is something of an intellectual mensch—the piece includes pamphlets (Artpace chronicles) of his political and philosophical musings framed through the relationships he developed throughout the residency (Frank is staunchly anti-social media and made a concerted effort to engage the local community directly). Frank also hosted various artists and thinkers in the space (such as Black Kirby’s visit and presentation on mass incarceration and Afro-futurism). Frain consists of four pieces playing in an ethereal quartet. The prints were made by running glass plates through a printing press, thereby shattering them and resulting in a print detailing every shard’s break surround two larger bleachers; they’re separated by a glass chain. The bleachers look onto shattered ceramics—Frank brought in teenagers to envision the future and then break the ceramics—and a sound-art piece, made in collaboration with the San Antonio artist Justin Boyd, of the queasy, prickly audio of the glass being run through the printing presses. 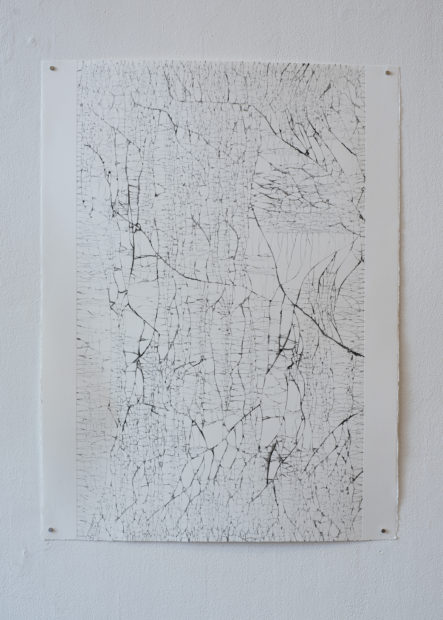 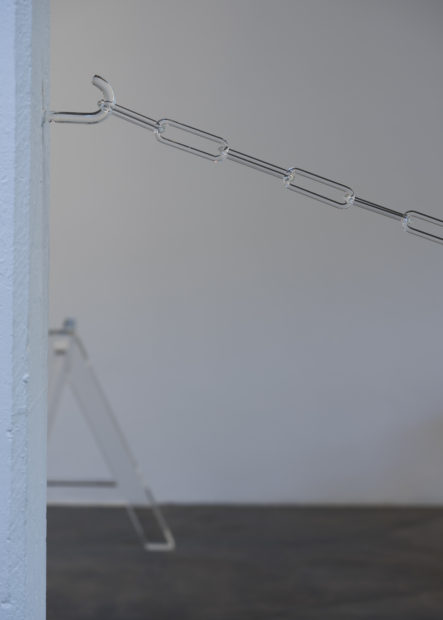 The result is like an elegant, perfected mathematical equation, whose ultimate meaning requires effort, but is guided and planned. The shattered prints in conjunction with the sound piece (which positioned in the corner ceiling by a skylight, sounds like a ghost, a dying bird, or the that type of wind that feels like an unsettling omen) form a simple and wise illustration of the experience of being alive—the chaotic fragmenting of individuality rendered ultimately the same for all, broken over time by the press of the world. The bleachers divided by a pristine glass chain looking onto ceramic debris articulate the folly of division. Sitting on the bleachers (which will move in different formations once a week) the ridiculousness of the significance of self crystallizes in cold mirth. You fool, what have you sequestered yourself for? To look onto dust? But like Hodge, despite the weightiness of the themes, Frank’s piece is not ultimately depressing or desolate. The solution of the equation of Frank’s piece is community, the solace in knowing that we all break the same. 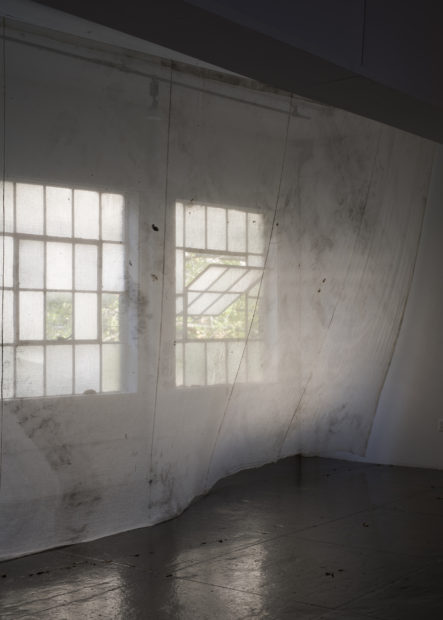 Astutely placed on the second floor and roof, New Zealander Kate Newby’s Let me be the wind that pulls your hair is simultaneously the work most tethered to earth and nature and most vaporous and celestial. A weathered dirty scrim (like if the scrims in the new Robert Irwin Chinati Foundation installation were left to blow in the wind and decay) billows serenely, obscuring a gathering of objects Newby made or found during her residency. Pit-fired scarlet ceramics (echoing the shatters in Frank’s piece) were made with the collaboration of a local potter and sit next to shells and stones creating a tableau of sentient harmony—the objects almost seem to be chilling with each other. Prints made from birds scratching birdseed on copper plates conjure the Zoroastrian burial method of giving back to the earth by leaving a body on a tall pillar until the vultures remove all remnants. On the roof, Newby, struck by the southern tradition of hanging bags of water to deal with mosquitos, made several perfectly clear glass “bags” and hung them on the roof. Newby also installed several pieces throughout San Antonio and the surrounding countryside, leaving a permanent latticed remnant of the piece and her residency. 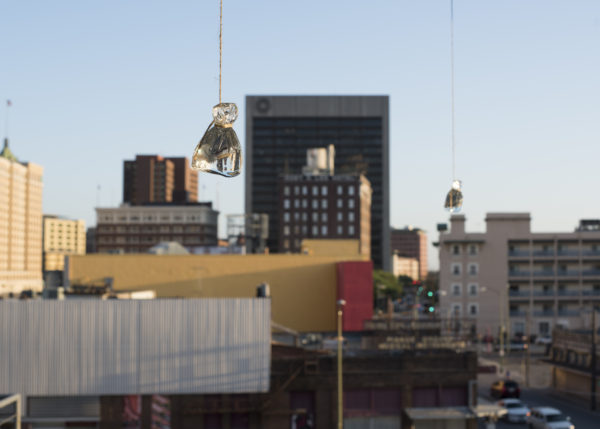 Taken together, Newby’s works form a balanced and reassuring conclusion to the narrative of the exhibit. The triptych begins with Hodge’s emotional, overwhelming well delivering one to Frank’s austere auditorium to witness the cracks and finally ascending to Newby’s denouement, of the swinging stasis of the scrim and glass bags—a frozen moment of calm.

The importance and input of community is the prevalent vein running throughout the three artists’ work. The artists have accomplished quite a dexterous feat—forged a bond with the people of a city to create works that profoundly understand mortality and loneliness and convincingly conclude that liberation requires going out and meeting those with whom to plan the escape.

Snapshots from the Artpace Teen Convening